I have always said writing is not a creative outlet but more of an inlet. Depending on our thought process and psyche that inlet can be muggy and stale while other times it can be full of rushing clear waters. This can make it increasingly difficult to create appropriate content for one’s current medium. 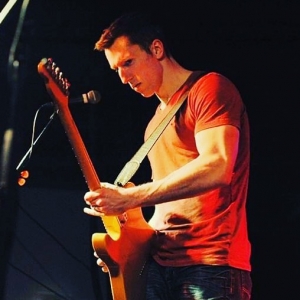 We often see this happen in the world of music. A band will drastically change like The Hollies moving from “Bus Stop” to “Long Cool Women In A Black Dress” or they just might stop playing all together; often after releasing a drastically different style of album. The most productive way to prevent this is to have the option of two very different creative projects in order to feed the grinding machine that is a writer’s mind.

Tyler Wilson has found himself both lucky and skilled enough to be in a band that is open to contribution from all of its members, as well as having the ability to create his solo content.

“My original stuff is so all over the board. I think it’s just a matter of where to put the songs. The ones I contribute to Checkerboard Floors are more party-rock, fun tunes because that’s what kind of band we are, but the other side of me is more of a folky, country, blues type. I don’t set out to write a song for this band or that band. If I want to have something finished I just kind of find a spot for it.”

In the songs he has contributed to Checkerboard Floors we hear a fun-loving energetic side of Wilson and in his solo project, we are allowed to observe the tender family-centric aspect of his personality. Recently, Wilson has released three solo songs that seem to carry the theme of coming of age and settling into family life. 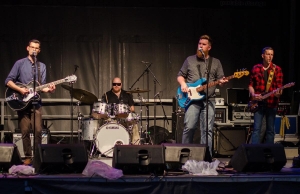 “I just write about what I know and what I’m feeling at the time. That’s pretty much what I’m going through at the moment. I know the songs kind of make it seem like I’m sad about it, but that couldn’t be further from the truth. I’m much happier now than I have been in a long time.”

I found it refreshing to hear someone embracing the change that occurs in life and asked why he thought things were easier now.

“I think life is just a lot more relaxed now. In your 20s when you’re hustling and trying to reach for the stars there’s a certain level of stress or anxiety involved because you think you’re not doing things right and not achieving all you should be. Right now, I’m kind of just doing whatever I want.”

Checkerboard Floors released their album Art Project onto streaming services back in 2014. It seems only natural that over the span of six years a writer would need a new outlet to express the changes that would occur to a person during that time. As we change and grow through the gaining of age and wisdom most of us hold onto the playful fun rock and roll persona somewhere deep inside of us, but also gain a sort of grounding through personal growth. 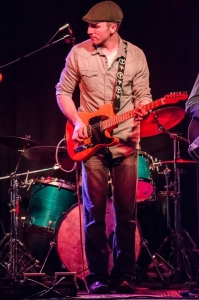 Both of these experiences are what make our music relatable and enjoyable. For a music lover that tends to gravitate to the lyrical side of things, we want to hear the writer express those emotions that we are also wading through. We want to be able to relate and hear how someone is lubricating their way through the gears of life. Being able to hear both sides of the coin from one artist is a rare treat.

Thankfully Wilson continues to provide us with that rare opportunity. Not only has Wilson released his solo project but he has also been working with the band to release new content from Checkerboard Floors later this year.

So whether you are wanting to kick back on a summer evening and reflect on what was and what is, or you’re feeling like bopping around your living room and shaking out some soul dust, Tyler Wilson has got you covered.

You can follow both Tyler Wilson Music and Checkerboard Floors Facebook page for upcoming news and give them a listen on your favourite streaming service.