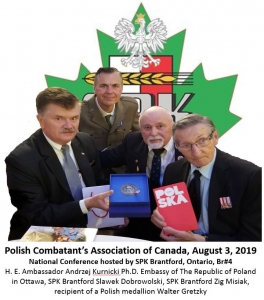 By: Zig Misiak and Jason Freeze

The WWII Polish Combatants’ Association’s national conference was hosted by the local Combatant’s Br#4 at the Polish Hall on Pearl St. over the August 2nd weekend. This three-day conference drew people from across Canada, Poland, United States and England.

The PCA was conceived in 1946 and it’s the first time in 73 years that Brantford has been chosen to host it. We were also honoured to have WWII veterans and survivors present at the conference, including many VIP’s.

Canada, at the outbreak of WWI, came to Poland’s defense immediately. Due to this and many other reasons, both Canada and Poland have shared a unique and connected relationship for many years.

We felt that this conference was an appropriate time to acknowledge Walter Gretzky’s Polish lineage and his ongoing support and contribution to veterans of all nations. 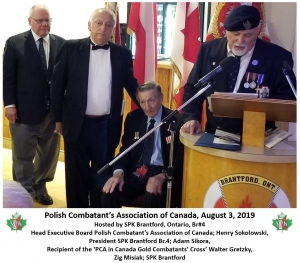 Thanks to Walter’s friend Zig Misiak, we are able to share this story with you.

Zig – I’m speaking on behalf of the Polish Combatants’ Association SPK Br#4 and in part as a personal friend of Walter Gretzky. It’s important to acknowledge the amazing work done locally, by President Adam Sikora and his wife Maria as well as Slawek Dobrowolski, to make this historic conference so successful.

Q – What medal did Walter Gretzky receive, and can you describe it?

Zig – Walter received the Gold Combatants’ Cross. It’s the highest award given by the Polish Combatants’ Association in Canada to a person for their exemplary service to Poland, Canada or the Association and its veterans.

Zig – The PCA was formed in Italy in 1946. It was comprised of Polish ex-servicemen and women who after WWII could not, or would not, return to Russian occupied Poland. Poles were scattered all over the world and one way they could keep a unified front against communist Russia was through the PCA chapters now in 21 countries.
The PCA is devoted to community service, maintaining a strong relationship with all Canadian veterans associations, assisting war casualties and participating in a myriad of ways making the communities they live in better places to live.
The British and Canadians have a history of alliance and close friendship with Poles going back to at least the War of 1812.

Q – How did Walter qualify for this honour?

Zig – A few years ago Walter allowed me to research WWI records of his father Antony and as I was doing this, I discovered details of the Gretzky family during WWII. I presented my findings to the WWII veterans and survivors of our branch SPK Br#4 suggesting that we recommend Walter as the recipient of a special award. Our branch vote was unanimous; agreeing to forward our information to the PCA/SPK head office for approval. The approval came, for a medal award, and there couldn’t have been a better setting than to make the presentation to Walter at the national conference here in Brantford on Saturday, August 3, 2019. 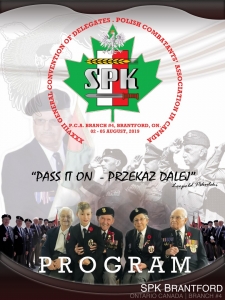 Program Cover
Shown in the center are the two remaining veterans and survivors of WWII with their wives. Mr. & Mrs. P. Lojko and Mr. and Mrs. Dubicki
Submitted Photo

My introductory speech prior to Walter receiving the medal includes more details as to why he qualified for this high Polish honour.

Dear veterans and survivors, our distinguished VIP’s as well as our valued community guests here today.

I’ve known Walter well for over 40 years so what I’m about to say is based on first-hand knowledge. To summarize anything about this man in under 2 minutes, let alone in under 2 hours is impossible.

Outside the media and public events Walter has had 1000’s of private engagements with people and to this day, at the age of 80, he is like the ‘energizer bunny’ and simply won’t stop.

Walter is a ‘human-doing’ not just a ‘human-being’ influencing millions worldwide as well, he is a humanitarian of the highest degree.

Walter is an author, has honorary doctorates, received hundreds of awards including 3 medals, 2 of which are the Order of Canada and the Order of Ontario. He is our Lord Mayor.

World War One
In 1914 Canadians as well as First Nations/Metis men and women volunteered joining the Canadian expeditionary forces who were eventually shipped to Europe in order to fight the Germans.

In 1917 an additional 30,000 soldiers, of Polish descent, trained in Niagara on the Lake and were also sent to Europe. They were called Haller’s Blue Army. Captain A.G.E. Smith of the Grand River Six Nations Territory, was one of the officers who helped train the Polish soldiers at NOTL and he went to Europe with them.

In 1917 Antony Gretzky left Chicago joined the Canadian Army in Toronto. He too ended up overseas fighting in the trenches until the war’s end. It is with my imagination that I could see Antony Gretzky fighting alongside Canadians and Haller’s Blue Army contributing to Polish Independence after the war in 1918.

After the war Antony decided to remain in Canada. He acquired land in Canning Ontario and to this day this farm has remained in the Gretzky family.

Antony, who was a very wise man, met a beautiful Polish lady named Pauline Maria Khodenessky, whom he married.

Walter’s father was a dedicated veteran and Canadian. Walter clearly remembers his father, though terminally ill and unable to walk, demanding to attend a Remembrance Day ceremony in 1973. It was his last.

For the first time ever, Walter is wearing his fathers’ WWI medals today. Walter, like his father, is a staunch supporter of Remembrance Day. 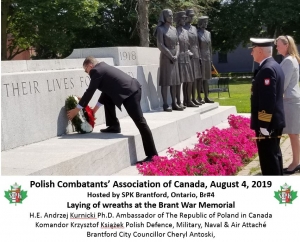 When Walter’s father died in 1973 all of his children were under the age of 12. They spent the next 15 years with the Polish grandmother Maria. She was adored by her entire family. In respect to his grandmother when Wayne, the oldest sibling, got married he made sure we had pierogis and golumpki on our plates at the dinner/reception.

World War Two
September 1, 1939 Poland was attacked by Germany and a few weeks later on the eastern side by Russia. It will be the 80th anniversary of this horrific event on September 1, 2019.

Once again Canadian and First Nations/Metis men and women came to Poland’s defense. Walter’s family was directly affected. His uncle and two aunts were ripped from their homes, in eastern Poland, and just like 100’s of thousands of other Poles were sent to Siberia. His uncle Rudy ended up in the Polish home army. All three, unlike 10’s of thousands of other Poles who died, survived. Walter and Wayne visited them in Poland several years ago.

Slawek Dobrowolski, SPK Brantford, also met several members of the family and provided additional information about their WWII traumatic experiences. Walter, up to this point, had no previous knowledge of this.

The Present
Walter has been a guest at St. John’s Remembrance Day ceremonies for many years. He and I had the honour of speaking in front of 1500 students and teachers reciting ‘In Flanders Fields’ together.

I would like to share a memory related to this event. As Walter and I were walking down the hallway to leave the building I suddenly realized he was not beside me. I stopped, turned around, and I saw Walter picking up poppies that lay on the floor. They, as we all know, unpin themselves easily quite easily and the wearer may not even know that they had fallen. Walter had both hands cupped holding several poppies. He said, “We can’t let them fall again, can we?” I know he was referring to those that died during the wars. Quite touching. 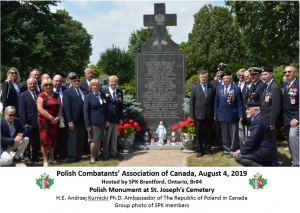 At Assumptions College’s ‘Thank a Vet’ luncheon Walter can be seen walking from table to table speaking to the veterans, other guests and young students.

Walter was a guest for the unveiling of the Polish War Memorial, located in Tom Thumb Park, standing beside WWII veterans and survivors.

Around Remembrance Day, at the Brant Cenotaph or the memorial in Paris, Walter can be spotted among the crowd, always wearing his poppy, taking in the solemn ceremonies of ‘remembrance.’

In recent years, Walter has learned more about the Polish side of his family than ever before. He is a proven guardian and valiant champion of veterans all year round. During his many annual speaking engagements Walter proudly refers to his European lineage.

Zig to Walter
Walter, in memory of your Father Antony, Mother Maria, Wife Phyllis, Sister Elen and your children Wayne, Kim, Keith, Brant and Glen as well as your 14 grand-children I now call back Kolega Henry Sokolowski to continue with this special presentation.

Q – What followed after your reading?

Zig – Andrzej Ruta, National President, P.C.A. and Tom Bakalarz, the Secretary General proceeded to pin the medal right next to the Order of Canada. Walter was reflective and deeply touched by the entire proceeding.
I was also deeply affected knowing that among us were WWII veterans and survivors, such as 98 year old Lloyd Bentley RAF. We had two Polish veterans, Mr. Lojko, 94 and Mr. Dubicki, 96, recently in the hospital. They knew that conference was for them and also for the memory of all those that have passed before them. They heard the call, they put aside personal pain and they were there. They both came with their wives (WWII survivors). Can you imagine what they all went through during WWII? Can you imagine being married for all these years?

Q – You said that the conference was very special and historically significant. Can you explain?

Zig – In addition to Walter Gretzky receiving a medal he also received a special medallion from the Polish Ambassador and one from Richard Blackwolf.
SPK Br#4 was given the opportunity to host this National PCA conference for the first time in Brantford in 73 years.
His Excellency Andrzej Kurnicki Ph.D., Ambassador of The Republic of Poland in Canada and Richard Blackwolf, President, Canadian Aboriginal Veterans & Serving Members Association and Jacek Bernasinski, Secretary General of the PCA World Federation, London, England were here in Brantford for the first time.

Q – The national PCA conference lasted three days. Did your visitors see some of Brantford?

Zig – You bet. On Sunday there was a wonderful mass at St. Joseph’s Church hosted by Father Adam. We toured the Mohawk Chapel and the Canadian War Museum during their annual open house. Wreaths were laid at the Brant Cenotaph by His Excellency Andrzej Kurnicki as well as Andrzej Ruta, National President, P.C.A.
We also visited the Polish War Memorial Monument in Tom Thumb Park followed by a gathering at St. Joseph’s Cemetery where wreaths were laid and consoling words of remembrance were spoken by Tomasz Bakalarz and our SPK Br#4 President Adam Sikora.

Q – Where can people go to find more information about the SPK/PCA overall?

Zig – The link to the PCA web http://www.spkottawa.ca/english/spk_history.html
and our SPK#4 Branford on Facebook.