The Vastness of Jazz with Nosey Neighbour 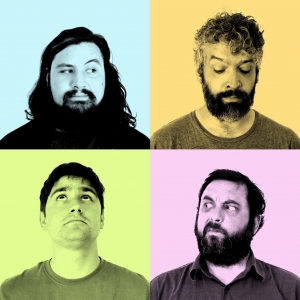 Jazz. Now there’s a tiny little word that holds such an immense world within it. Some may view it as a planet of its own in the universe that is music. That may be a bit of a romanticized statement but it nearly seems true. I can’t think of another genre like it. With its enthusiastic fan base, plethora of sub-genres, culture, and theory, from an outsider looking in it seems as though it is a world within itself even though it does seem to bleed through unnoticed into so many of our more familiar genres.

Nosey Neighbour (Costa Chatzis-Drums, Paul MacDougall-Guitar, George Ouellette-Bass, Ben Bowen-Trumpet) has been treating us to a taste of what that world has to offer since the fall of last year where they had their debut at The Brantford Jazz Festival and quickly went on to secure a five-month residency at The Rose and Thistle.

This month I got together with Nosey Neighbour and discussed a few brief differences between Jazz and other musical genres. With all of the band’s members having played in various styles of bands as well the first difference I was curious about was how the audience differed at a Jazz gig as opposed to say a Rock or Pop gig.

“For me, it’s playing to people sitting down,” Ouellette said. “That’s how I like to enjoy music is to sit down and take it all in. When I see people paying attention and into it its cool.”

Chatzis added “When we play with Yoney or Bad Reed it’s definitely young women coming up and dancing their hearts out the entirety of the set. That’s not typically the case with the jazz music but I feel like it’s more broad. It’s really more about the audience at a jazz gig. If the audience is like twenty-somethings, we probably won’t play jazz standards all night. We’ll probably play some more hip stuff. And try and real them in with that.” 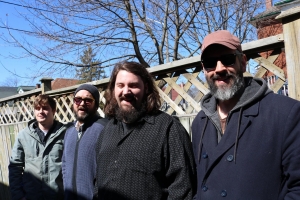 “It’s totally true that it’s very broad,” MacDougall explained. “Any jazz band that I’ve ever been in it’s true that you are catering to the audience. If it’s a reggae band you’re expecting reggae tunes, if they played a pop tune in the middle of their set it’s not going to go off well, because the audience isn’t expecting that. Whereas in a jazz group they are expecting jazz but you can deviate from jazz and people still appreciate.”

So what exactly makes this complex planet sustain itself? How does Jazz work? Does it behave in the same confines as other musical genres?

MacDougall said, “I don’t know if there’s any other genre like it. When you look at all the other genres of music, the music is composed all the way through so everyone has a part. Ya, you can deviate a little bit from that in a show but you can’t sing different words or different melodies, and that is the essence of jazz.” There’s a melody to a song and that part gets played and then from there, it’s almost fair game to do, within reason, whatever you want.

There’s an irony to that because a lot of people think jazz all sounds the same, and there are similarities to it but, ultimately when you peel back the layers of what’s going on the exercise to make it different every time you do it. Even just a little bit.” 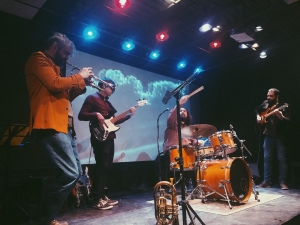 “There’s a lot of freedom within a lot of structure,” said Bowen. “Because it’s improvised music and nothings ever played the same twice it’s dangerous. Cause everybody can go somewhere and if you’re not watching your mind can wander easy.”

Which led me to wonder how playing this genre may affect a musician’s skill and understanding of music in ways that other genres may not. Chatzis and Ouellette are undeniably skilled musicians, however really digging into jazz for the first time has brought new skills to the table for each of them.

Ouellette: “I started reading music and it’s really helped me with understanding key signatures and how to navigate the whole neck of the bass.”

Chatzis: “With jazz you’re always moving. That has to do with the improvising nature. Something new can always come out. So that means you always have to be working on something new or some new perspective on some kind of new groove.”

From Standards to Swing to Afro-Beats, Jazz holds an array of musical experiences to be had as well as a certain level of musicianship that does not go unnoticed. This is not the stuffy tight buttoned affair you may have in mind so if you’re looking for something new check out Nosey Neighbour on September 7th at the Paris Surf and be sure to keep an eye on their Facebook page for more upcoming dates and news.