The Trouble With Genres with The Desert Plains

Who, What, Where, When and Why, these are questions we ask nearly every time we hear of anything of interest. The What seems to be rather hazy when it comes to the music world these days. “Hey this band is playing tonight,” someone will say. The next logical question asked will be, “What kind of music do they play?” This is becoming an increasingly difficult question to answer. Most times I feel as though someone has just asked me to explain Pythagorean Theorem (math is not my thing). After talking with Jake McGuin and Jay Sayles of The Desert Plains it became apparent that it’s not only music goers that seem to be having trouble with this but also the band members themselves. Have we gotten to a point where genres are just a hindrance? 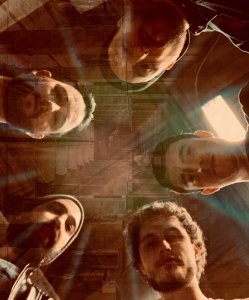 The members of The Desert Plains (Jay Sayles Vocals, Jake McGuin Base, Jay Bennie Rhythm Guitar, Jason Rattie Lead Guitar, and Terry Pineau Drums) have all been playing music together in some fashion or another for many years now. They are in the midst of recording their first album and have a second well underway. Yet when asked what genre of music they play there seemed to be many answers.

McGuin gave his idea of the genres they could fall into, “I think kinda like Hard Rock, I never know what to call it exactly. Especially with the mindset of it, everyone has their different influences that cross over from stuff that we all like. I guess I’ve referred to it as Modern Rock.”

Sayles agrees with the rock genre but has a different idea for the sub-genre, “I like to refer to it as Stoner Rock. That’s the genre that best suits it for us. It’s rocky but not Screamo and it’s not quite grungy.” This ambivalence is not uncommon when speaking to artists, or even when talking to your average music fan.

It’s abundantly clear upon hearing The Desert Plains that they can be loosely categorized into the realm of rock. But what does that really mean when under that category you have so many genres to choose from? Hard Rock, Nu-Metal, 90’s Alternative, Screamo, Metal, Grunge, Rock, with so many vague sub-genres what do these titles even really mean anymore? And do we even really care? 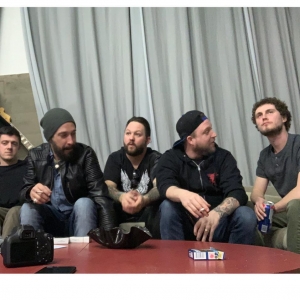 Naturally, we now move to the Why. Why is it so hard to pick a corner of a genre to neatly tuck bands into? Sayles provided his thoughts on the reason for this predicament.

“I just feel like bands will try and branch out from whatever genre they’re labeled with anyway,” Sayles said. “Every genre has crossed over now. So everything in between is already established.”

McGuin added, “We aren’t really worried about what to call it, we are just trying to write our original music.” It would seem that many bands I’ve spoken to in the past feel similar to this, stating in their own way that genre isn’t something they concern themselves with.

Lastly, we have the problem of When and Where. For smaller places such as Brantford and the surrounding area providing alternative music can be a tricky business. Downtown seems to be the hub of the music scene which brings about a number of challenges in its self. Businesses are forced to feed the masses and when a town’s music scene is kiddy cornered into a small area the masses, well… just aren’t very mass.

“The downtown is a great area for people that want to go see shows, but you have so much [negative] stuff going on, especially for people that aren’t used to it,” McGuin explained while discussing how this hinders the music scene. “It’s pretty much the only place you can go see live music without going to a restaurant or a coffee shop.”

Sayles adds, “Which then steers the way of the music scene, then you have a bunch of guys playing acoustic guitars because that’s all they can get away with. It’s just that the cost doesn’t outweigh the amount of people that will actually show up in this town.”

That being the case it doesn’t leave much room for the when and where of “alternative genres” in Brantford. Is it time to do away with genres altogether? Probably not, but it sounds as though in this day and age of trying to come up with, or do away, with labels for everything is impacting the music scene as well.

Keep an eye on The Desert Plains Facebook page for information about their up and coming album as well as some exciting show dates. You can catch their next show in Brantford on August 31st @ Two Doors Down on Market Street.

Get out there and support alternative music in Brantford! Let’s keep variety within our music scene and support the business owners and the excellent artists this town has to offer! Without them, things would be pretty quiet.