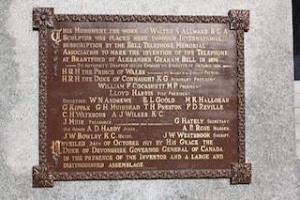 We are saddened by an act of vandalism and theft that took place overnight at the City’s cherished Bell Memorial, in which the original dedication plaque was stolen from the monument located at West Street in Brantford. Unveiled on October 24, 1917 by the Governor General of Canada, and in the presence of the inventor himself, Alexander Graham Bell, the Bell Memorial beautifully depicts Dr. Bell’s discovery of the power to transmit sound through space.

In 1908, under the leadership of Brant M.P., W.F. Cockshutt, the Bell Telephone Memorial Association commissioned a bronze and granite sculpture to celebrate the invention of the telephone in Brantford. Known as the Bell Memorial, the final design was awarded by international competition to prolific Canadian sculptor, Walter S. Allward. The Bell Memorial was a precursor to the Vimy Memorial and is seen as the finest example of Allward’s early work.

As a vital part of our unique heritage, the City is asking for the public’s help in retrieving the 101 year old bronze plaque. Anyone with information is asked to contact Brantford Police at 519-756-0113 or 519-756-7050 or if found, please return to Brantford City Hall at 100 Wellington Square or the City of Brantford Tourism Centre at 399 Wayne Gretzky Parkway.