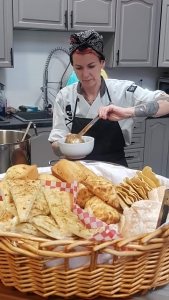 Ferrar, along with her three sisters would begin turning out delicious jams, jellies and other preserves and the aptly named “The Jelly Girls” became a reality.

Along with her husband Stephen, Ferrar is also the brainchild behind Brantford’s first state-of-the-art commercial community kitchen, Our Kitchen Brantford. 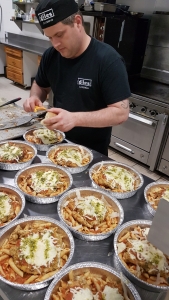 Chefs, bakers, home cooks, beverage makers, Altitude Coffee Roasters, Tea Maven, Tasty Road Trips and more, make up some of the 30 members who normally create their culinary specialties inside the facility at 20 Roy Boulevard. The ‘creation’ happens in the back where the commercial kitchen is open for use 24 hours a day, on a staggered basis. The front of the building hosts things like cooking and other educational classes.

Having only opened the doors about a year and a half ago, the aim was to help start-ups and others in need of a commercial facility through three types of memberships; general, entrepreneurial and incubator. But in the midst of a global pandemic, they’ve been forced to switch gears. “We’ve basically become a take-out and delivery restaurant in order to keep our members working,” says Ferrar. 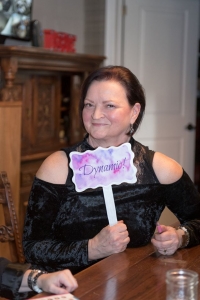 At the same time, the members are also helping feed vulnerable people who need meals. Tom Hall’s White Rabbit Catering is now employed by the City of Brantford to feed the homeless, who’ve been put up in hotels to self-isolate.

And Ferrar says other members are helping supply meals to those still on the street, through an organization called “Diane’s Devotion.” They’ve sent soups, fruits and sandwiches and other food to the organization, depending on the need.

“We are appealing to the public right now and to the City of Brantford to donate meals to people who may still be isolated, or to seniors that they’re worried about,” said Ferrar.

People who want to help feed a neighbour or loved one can purchase four meals for them and the fifth one will be free, or donate cash to help feed someone in need that you may not even know. The reasonably priced fare created by professional chefs, runs from $12 to $15. 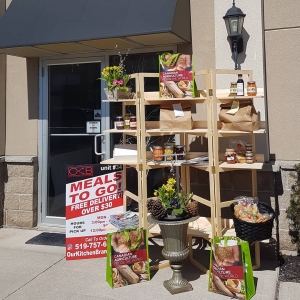 Marshall Giles of Giles Catering, who normally works out of Knights Hall is making meals for Our Kitchen Brantford, as is member Chef Jules, whose classes and events have now been cancelled.

The professionals are employed at a very reasonable rate to make the meals for those in need. Ferrar says it’s all new to them, but it works. “We’re not used to running restaurant take-out and delivery, we’re used to renting the space to our membership in order to make them successful,” she said.

She points out the operation isn’t currently making a profit, because they’ve temporarily suspended regular membership fees. That’s because despite social distancing, many of the members who have families, children and elderly parents, are choosing to stay at home. “We’re just staying afloat and keeping our chefs working to keep them employed, to keep the doors open and we can feed people now and fulfill a need,” says Ferrar. 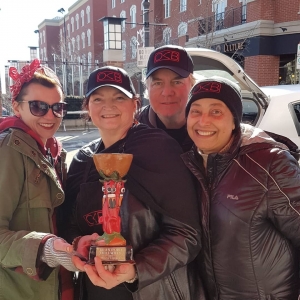 When things get back to normal the membership will have grown by at least four members. The pending members are currently laid off or have extra time, with plans to be a part of things, down the road.

Ferrar says working in a community kitchen also provides an opportunity for collaboration in a “family” atmosphere. Bakers purchase supplies together, while some members help out the caterers on various jobs.

Ferrar is confident of continued future success when life returns to normal, but says the charitable component will continue. Our Kitchen Brantford is currently depending on donations and on people buying their food in order for them to continue on. “We will totally be successful, our classes will resume and we’ll have both kitchens fully stacked up with people and their successful businesses,” she said.

For more info on Our Kitchen Brantford, check them out online at: