Open Jams seem to be designated to what some may call the “slow nights” at the bars. Usually, they are held somewhere at the beginning of the week or a Sunday afternoon. For the music goer, it can even be a bit of a deterrent from time to time. So why are Open Jams still a regular occurrence? Do they still serve a purpose?

Local musician Greg Gingerich found Open Jams a great resource when he decided to pick up music again, “I started going to Open Jams to get confidence and make connections.” So much so he began to host Open Jams for the following seven years. “Many musicians cut their teeth on my stage,” Gingerich said. “Open Jams are an awesome platform for newer musicians looking for confidence and some may not have the chance to play in a full band scenario.”

Not only do Open Jams facilitate new musicians by allowing them to play to an audience but they also allow them to hone the technical aspect of playing on a stage.
Singer-Songwriter Liam Brims touches on this when asked how Open Jams benefit him as a musician. “I think open mics are important because it takes practice to become comfortable. I’ve practiced for hours in my room, but nothing will replace the feeling of being on stage, plugged in and working with a microphone.”

As for the seasoned musician, these nights can be refreshing and useful. Local musician Dennis Hull points out “There are several good reasons for open mic nights. The top reason that comes to mind is to meet other musicians and it’s a chance to get your original songs heard in a constructive environment.”

That idea of Open Jams used as a networking opportunity is a big one. I know that as the music goer I enjoy the spontaneity of the whole thing. You never know who’s going to walk through the door and play. You never know what group of musicians might end up sharing a stage that never have before, and what that might sound like.

Steven Elmo Murphy has been running an Open Jam at Two Doors Down for longer than any of us can remember and it’s that spontaneity that keeps him at it. “It’s nice to hear what random people have got to say in the form of song, and stories.” 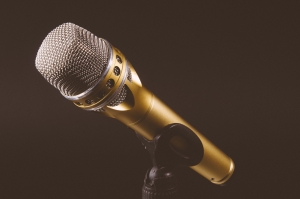 And random it is, which is another perk. Although it can be seen as just a night of singer-songwriters that isn’t always the way. Some Open Jams offer a full set up to be used and encourage a full band scenario which again creates that networking opportunity. “I’ve met a lot of great people over the years,” Gingerich said. “With the right location and equipment open jams can be more fun than just watching a band. Every time you add a new player, they add their personal touch to the songs.”

One of my fondest nights attending an Open Jam was when I was lucky enough to see someone play deer antlers as a percussion instrument. He had organized a group of people to come and have a sing-along to You Are My Sunshine. It was a beautiful moment that I know will stick with me for years to come.

You never know what is about to hit your ears next. The beauty of the Open Jam is the unknown. It could be great; it could be not so great. Someone you saw struggle on stage a while ago, could become your new favourite thing. It’s like reigniting the excitement of a candy surprise bag as a child, but now with music.

The Open Jam is still a useful, and at times, down right magical tool for both musicians and music goers alike. So why not get on out and see what’s new and happening in our music community! Check out your bars’ Open Jams and support the music community and maybe even catch something magical!