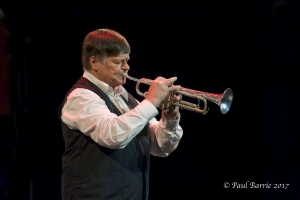 The power of a marching band can be mesmerizing, especially to a child. When you are standing waist high peering up at rows of militant-like people dressed in heavy jackets lined with tightly braided rope and gleaming brass buttons it is as though, there before you, is a highly trained musical army. Even hearing the sound of the bass drum pound as that army approaches can fill ones’ heart with a sense of what I could only describe as a charismatic, joyful fear. It was that sharpness and captivating attraction that would catapult George Rose into a lifetime of music.

Long before it became infected by the hustle and bustle of a busy metropolis, Rose grew up on the countryside in Burlington, ON. It was there that he first fell in love with the power of a full band.

“Once a week we would go to town and pick up groceries, usually on a Friday night. One day we were picking up groceries and a band marched up the street,” Rose recalled. “It was called the Burlington Boys and Girls band at that time. They had red jackets on and dark blue pants, and they looked really sharp I thought. I just loved the sound of the drums and the horns and the shininess. I was about nine or ten years old and chased them for a couple blocks just to get a better look at them, I was pretty excited.” 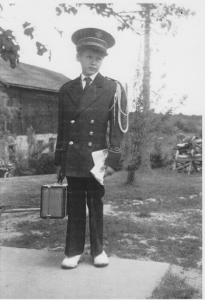 Directly after laying eyes on them he insisted that his parents provide him with lessons. He would soon join that very band. Although he started a month late he quickly managed to catch up to the others in their lessons. He played a variety of instruments until the pinnacle moment came when he knew which instrument was meant for him. After watching the three trumpet players in the Junior Band play a version of “Buglers Holiday” on their cornets, Rose knew that that was his calling.

“I was in awe! I was just in awe! I wanted to play cornet. I remember coaxing my instructor Elgin Corlett by tugging on his jacket, ‘Elgin Elgin can I play cornet?!’” Rose said. As there were not enough horns to add another player, Rose set out to coax his parents into buying him one. “My parents combined birthday and Christmas and bought me a little cornet and it wasn’t before long that I was in the Junior Band and I was playing parades marching up and down with my red jacket. Proud as punch!”

From there, Rose went on to join various bands and pursue private lessons from skilled players such as Don Johnson and Eric Ford. While performing with the Super X Swingphonic Orchestra an interesting opportunity came about. The band had double booked itself and Rose was asked if he could put together a band to fulfill one of the bookings. Luckily, he happened to have put together a few people for a one-off show a while beforehand and agreed to take the gig. It was that group of folks that turned into the George Rose Big Band that has now been going strong for 35 years. 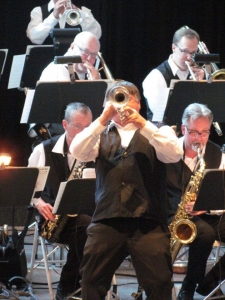 The band started out with a four-and-a-half-year afternoon residency at The Alexander Tavern and then a year at The Fox and Hounds. Putting in the time lead to private functions and banquets as well as special events such as the introduction to a new model of BMW.

After all these years they still have four original members in the band and are playing strong. Hearing of any band lasting that long is highly impressive. I asked Rose what he thought kept the members staying so long.

“Presenting a challenge to the musicians. They like to do well and they like to work hard, so not letting them get too complacent. We present new material all the time and have recorded seven full-length albums during the life of the band.”

He also addressed the idea of discipline within a band. He explained how it is important to have a single band leader that is strong enough to both trust his gut instinct, as well as hear out the ideas of the other members.

“I think you gotta work together and the only way you can work together in a band this size is to have one leader. You can’t go in several directions at once. I think there also has to be mutual respect in the band. That’s a big part of it, is respecting their abilities as well,” Rose said.

The George Rose Big Band is sure to keep a healthy balance of work and play. That became evident as I entered their garage-style rehearsal space, complete with small side jokes, including a fishing net attached to a mic stand. I’m sure this light-hearted foolery combined with disciplined hard work is what has made this band as tight, professional and successful as they are.

George Rose Big Band provides an array of musical tastes from Sinatra to Chicago to big band swing. After listening to a few of their albums I know it’s a show I wouldn’t want to miss.