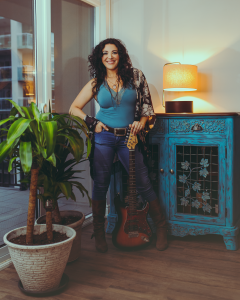 There once was a girl at the age of three,
who moved to our small town from far away in Italy.
She came and sang a song all on her own
to the students and staff of Major Ballachey.
Then a teenager who wrote and wrote and a collection of poems
Has now grown to sing us songs aplenty.

Tamara Maddalen has come a long way from being a young girl unsure of the words spoken from those around her to a smooth, relatable and highly talented songwriter. Not only has she already released the studio album Feeling Pretty in 2000 and her self-titled album Tamara Maddalen in 1998 but now has channeled into the memorable music of her youth to create the sound of her new upcoming EP Mint Green Mercury.

“Some of my earliest memories dating back to the late 70’s and early ’80s are of riding around in the family 1977 Mint Green Mercury,” said Maddalen. “With my dad listening to his favourite artists like Bob Seger, Odis Reading, Elton John, Aretha Franklin, CCR, Ray Charles, the Rolling Stones and Bruce Springsteen who he would refer to as “The Boss”. At the time I had no idea that those singular northwest Alabama sounds that deeply penetrated my soul would become the inspiration for the writing and sounds on this third album.” 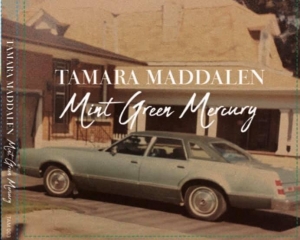 Maddalen has proven proficient in taking the sound of the bands that filled those memorable drives, combining them with her life experiences, and making the sound her own. The EP Mint Green Mercury brings us a comforting shoulder to rest upon wrapped in blanketing warm tones.

When asked what it is that has been driving her lyric writing Maddalen states, “My lyrics are definitely retrospective and self-reflective. I sing about sadness and hope too, but I can always relate it to my experience or that of someone close to me that’s affected me somehow.”

This becomes quickly apparent as one listens to the singles that have already been released across all digital platforms. The single “Cosmic Fail” delivers the sound of raw vocals that match the frustration I can relate to during the push and pull one may feel during the end of a relationship. In “Rearview” she tackles the complexity of feeling stagnant yet tangled in the romanticism of memories. Then gives us the feeling of hope in love in the single “Fade Away”. 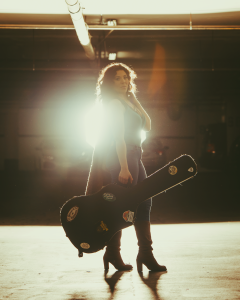 Tamara Maddalen – Whenever You Come Around Promo – Submitted Photo

The most interesting part of Maddalen’s songwriting is that although there is a definite theme of relationships and the self-reflection that goes along with them, it is never fully clear what type of relationship she is speaking of. I appreciate the sort of openness she leaves giving the songs room to breathe into a deeper level of relatability. It could be a friendship come to an end, a romantic relationship turned frustration or even a strain within the self. It’s that slight vague air that gives these singles their magic.

This innate ability to write combined with her smooth yet powerful voice creates an impressive experience that is not only apparent while listening to Maddalen’s tracks but also creates the captivating experience of seeing her perform live. While seeing her impromptu performance at Two Doors Down I was impressed by the number of people that sat and listened with unwavering attention. As Maddalen delivered her thoughtful lyrics you could see the points of recognition on the faces in the crowd. This seems to be a rare experience these days.

Tamara Maddalen brings us her softer side in her new single “Whenever You Come Around” that was just released February 21st across all digital platforms. Be sure to give her a listen and ‘Be Seen’ at her next performance.

You can also follow her on FB for upcoming performances and radio appearances. Or head over to her website www.tamaramaddalen.com for more details.