For a young musician these days there seems to be a plethora of things you need in order get the attention of a listener. You can put in your 10,000 hours, you can buy fancy gear and drape yourself in fancy clothes, but all of that becomes transparent if you don’t have heart. In order to stand out you need to have that special drive that comes from singing because you simply have no other choice. This is a trait that Leb definitely brings to the stage. 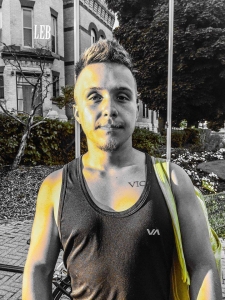 Starting out when he was just 11 years old, Leb has made music his driving force. Being exposed to music through churches and influential people throughout his childhood, it became his way of expressing himself through good and bad times. Growing up without a father and making some long-distance moves could be enough to knock some of us down for good, but music became not only a passion and therapy but also a way to bond with his brother. The two began collaborating at an early age and went on to form a few bands throughout high school.

During those troublesome teenage years Leb found himself in and out of trouble but during his 16th year he found some light. Unfortunate circumstances are what brought him back to Northern Ontario that year, however that trip proved to be life changing. It was there he had the chance to experience live music for the first time. While visiting with cousins and family after a funeral Leb was taken to a three-day Jamboree. Not only did he get to experience the magical feeling that only live music can give you, he also was able to perform the songs he had worked so hard to learn, both covers and original, for friends and family for the first time.

“It was really just a way for me to express myself and feel like I was connecting with other people. As much as I’ve always been fairly enthusiastic there was part of me that was searching or hurt. I was looking for something. So my music became the way I not only expressed myself and my hardship, but also the way I could connect with other people. It was the way I socialized.”

There was no stopping Leb after that. Throughout high school he played in numerous bands and musicals, as well as a guitar ensemble. Anywhere he could play he would. He also went on to plan a number of events including assisting with the organization of musicians at Brantford’s The Station Coffee House. Event planning is still a passion of his that he continues with at a variety of venues throughout the city.

Leb spoke passionately of his time in the punk band Paper Beats Scissors. It was here that he learned how to accept criticism and felt he really began to grow as a musician which he gives credit to his band member at the time Dave Howard for providing. 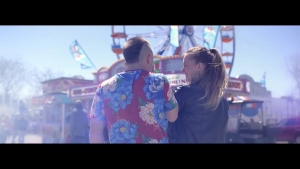 “Being a young musician I’m sure I hurt many years before someone had told me you know…maybe you could improve in this way, or maybe don’t be so loud, or you’re flat here. I had to step outside of myself and realize there is so much more I can improve on. It was more for my heart that I was playing music it wasn’t because I was the best. As much as I thought I was good in my head I maybe just let it get to my head when I was young. I was playing with a bunch of really talented musicians, I was just the guy who was in it with his heart.”

“It was really a growing experience for me to throw myself in with other musicians that were better than me,” Leb said.

Leb continues to bring that drive and heart to the stage in his solo performances as well as with a backing band. He has also released a video for his single ‘Please Smile’ which can be found on both his Facebook page and Youtube. Get out and check out Leb and Co. on April 20th at Two Doors Down.