Throughout time, music has been used as a means to heal. It can be found in conjunction with so many forms of healing from singing in church, mediation drum circles, or even the calming, ambient sounds you hear while getting a massage or acupuncture. So many of us roll down the windows and sing our favourite song at the top of our lungs after a hard day at work, or dance in our living rooms to release pent up negative energy (if you don’t I recommend doing so). 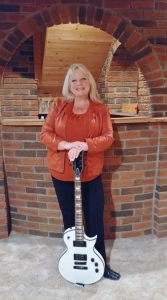 What not so many of us can say, is that we have experienced the healing power of music through forming an all women Elvis impersonator line dancing group. There is one woman who can – Joan Minnery.

Joan Minnery was raised with music, her parents were Vaudevillian performers, and all of her siblings are proficient musicians. It was always a major part of her life until she hit a number of roadblocks and the music began to fade away. She hadn’t noticed how far it had gotten away from her until her brother died. After that loss, all remaining siblings began singing again as a way to cope.

It wasn’t long after that that Minnery was offered a life-changing invitation.

“My neighbour said to me on Friday night, ‘I’m going to line dancing wanna come with me? I said, ‘What’s that?’ And that’s where it all started.” Minnery explained.

Minnery found herself enjoying it and joining a competition team which would become The Graceliners, an all-female Elvis impersonation line dancing team. It’s ok, I had a light-hearted giggle at the notion as well! However, that team made their way touring across Canada and the US. They were also featured in USA Today and on CNN.

From there Minnery continued to spread her love for Elvis by starting Brantford’s Elvis Fest that ran for eight years. It was nominated for awards every year and won Brantford’s Best Tourism Event in 2004. She also began what is now her main profession as a Vocal Instructor, as well as forming the all-vocal group Memphis Motion, a tribute to Elvis and the music of the ‘50s and ‘60s. 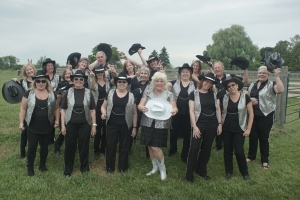 Unfortunately, Minnery was once again ambushed by life’s many hurdles including the passing of her parents, major health issues and even a brush with death herself. Which understandably caused a bout of depression.

“Music saved me. I certainly let it go while I was depressed but it certainly saved me and helped bring me back,” Minnery said. “Once I got better, music was just waiting there for me.”

As we chatted about her many musical endeavours past and present, no matter what the venture or time frame, Minnery continued to express her feelings for the healing power of music. I asked her why she thinks that is?

“It’s the universal language of love. You can take 50 people who have no ethnic culture what so ever and put them in a room with 50 Hispanic people and turn on Latin American music what do we all start doing? We start dancing together.” Minnery answered. “We don’t know each other; we can’t understand the music. That’s how music brings you together. You go to anything, you go to a funeral, you go to church what is it that brings everyone together? It’s the music. It’s a universal language. You can escape in it for awhile.” 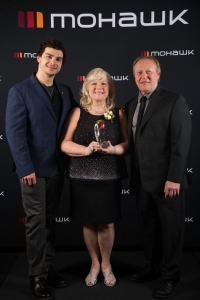 Minnery has a multitude of projects on the go including motivational speaking, theatrical pursuits, teaching, dancing, and Zumba instruction to name a few. All roles that seem somewhat far from each other but she ties them all together with one thing.

“Everything I do revolves around music. If it’s Zumba its Latin, line dancing its predominately country music, I teach music and I perform music. Everything has music to it. My motivational shows have music, I sing. It’s all about music. It’s my three M’s: Motivation, Movement and Music.”

This passionate woman sure does have music deep within her soul and is eager to share it in any form possible. I can’t say that that’s a bad thing. Expressing your self through any musical medium possible can only lift your spirits.

You can catch Joan Minnery performing either solo or with her band Sivle. You can also catch her with her latest line dancing group The Waistliners who have recently performed at The Grand Ole Opry in Nashville.

Visit their Facebook page for booking and performance date information.