Sid Vicious said, “I’ve only ever been in love with a beer bottle and a mirror.” It seems that’s what most of us think of the life of a working musician. Unfortunately we rarely focus on the possible health benefits of playing music for a living. Eric Mills has learned that if handled properly, music as a career can actually bring many positive changes to one’s lifestyle. 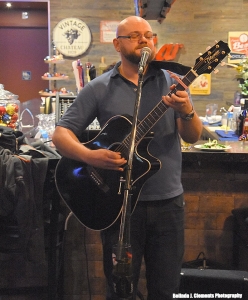 After developing Crohn’s Disease at an early age, Mills began playing guitar as a way to pass the time. He quickly became inseparable from the guitar. He had fallen in love with the instrument and the ability to have it accompany his singing skills. From that point on, he knew it was all he really wanted to do.

Fast forward to adult life and Mills found himself stuck in an undesirable job, working nights, long hours, an injured back and a nagging sense of depression. “That was the only time that I stopped playing music. I was depressed and I ended up herniating a disc in my back,” Mills said. “When I went for the surgery and I came back, I didn’t know what to do. I just couldn’t figure out why I was trying so hard to do this job…it’s not my dream.” That was when he decided to give himself six months to try and play music for a living. Six years have passed and life has never been better.

“I’m so much happier now. Anytime I get at odds with what I’m doing I think, ‘remember your last job!’ It really puts it in perspective for ya! There’s very little to complain about in comparison.”

We as an audience may not notice playing music can also be physically demanding. Mills explains, “I feel like playing music is a good amount of exercise. It’s not easy and singing isn’t easy. It’s physical exertion to play for three hours at a time.” Not only does it tire your body but it also tires your voice. Thanks to this Mills had conquered the desire for cigarettes. “Immediately after you smoke, it makes your voice tired. So I thought well I won’t smoke on any days that I have a show, but then I was having a show four or five days a week. And eventually it just got to the point that it was silly. It was, do you wanna sing or do you wanna smoke?”

Not only did Mills ditch the smoking habit but he also learned to stay sober during shows, not always the easiest of tasks when engrossed in the music scene.

Mills explained. “It’s the only job that they are going to give you free alcohol, you’re encouraged to drink. It was becoming an issue to where I was drinking every day. I had to make a decision… ‘Do you want to play music for a living? Yes. Well, then you have to do it sober, you can’t do it drunk.’ You have to take it seriously. I used to think a couple of drinks would loosen ya up and you’ll play better. It’s a lie you don’t. You get sloppy.”

Through taking on the immense challenge of working as a musician it sounds as though Mills has increased his well being ten-fold. Not an easy task by any means, but highly encouraging to hear one speak of the benefits this career choice can hold. As well as learning to maintain and stay true to your sense of self through it all. “I’ve also learned not to try and be someone I’m not. I’ll get in my head that I’m going to try and present some sort of character. First of all, its not sincere and its forced. It puts time into positions that I normally wouldn’t find myself in and it gets me into trouble. Be true to yourself and don’t try and be something you’re not because it’s glaringly obvious and you’ll get called out on it immediately.”

Mills concluded our interview by stating, “I feel like the luckiest person in the world to be able to play music for a living. It’s not the easiest thing to do, and it’s not stable, but I wouldn’t trade it for anything else in the world.”

To check out the professional and valued performances of Eric Mills, look for show dates on his Facebook page.