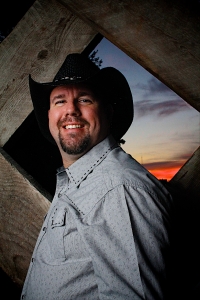 It’d be hard to argue that something distinct doesn’t occur in the world of music every decade. Whether it be the psychedelic movement of the 60’s or the jazz of the 20’s, it seems nearly every decade holds something that stands out musically. The late 80’s and early 90’s certainly brings to mind many musical phenomena’s, but the one that always baffled me the most was that there were so many people who were simultaneously fans of metal and country music. That musical pairing always seemed very a strange to me, that is until I sat down with Dan Badger to listen to his journey from strictly a music fan to a working musician.

It all started in Quebec when he was no older than four years old and his mother would bring him to see live music during the afternoons. A few years later he had moved to Ontario with his Father settling in Fergus and then finally in the Cambridge area. During those times Badger would be exposed to music groups such as Poison, Motley Crue, and Guns ‘n’ Roses, along with a number of other 80’s metal hair bands. All the while still hearing his father listening to country and western and bluegrass.

Badger spent his early adolescence doing what many of us budding music fans would do at that age, getting together with your friends that could maybe name a chord or two to plan a band. Friday night the idea gets thrown around, by Saturday you are definitely going to be the hugest rock stars ever, and by Monday the whole things been forgotten until the next weekend when the process starts all over again. 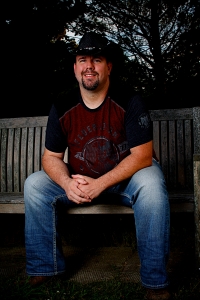 It was the week after Dan Badger had seen Metallica that all that changed. A few days afterwards his father approached him and offered the 16-year-old boy an extra ticket to see Randy Travis. “It was kind of the uncool thing to do but I was like, ‘yes I’ll go!’ and the influence turned out to be completely amazing,“ said Badger.

That concert came at a pinnacle time as the transition had already started to occur for Badger. “I got to a point where in my ghetto blaster one side was all that stuff (heavy metal), but the other side all of a sudden had Travis Tritt, Randy Travis, and Clint Black,” Badger said.

It was at that concert with his father that everything he had thought he’d known about being a musical performer was about to change.

“Just a few days ago I saw Metallica have their devoted friends yelling and swearing at them,” Recalled Badger. “Then there was this guy just sitting on a stool in the middle of the stage, strumming his acoustic guitar, and having people laying a dozen roses at his feet! After every song finished everybody clapped, and there was nobody cussing at him, there was nobody flashing him as far as I could tell [laughs].”

“The amount of respect fans gave somebody in country music versus what the respect that people claim to have for their heavy metal bands was a whole new level for me,” Badger explained.

It wasn’t long after that that he realized that he had already leaned towards country roots without noticing it. He had suddenly realized that within the glitzy grime of that era’s metal music lies the ballads. These were the songs he found were his favorites and within those ballads was his hidden bridge to country music, as well as the understanding to my curiosity of why one could love country and metal at an equal depth. Tucked deep beneath these songs is a heavy underlay of country like framework, bricked by dramatic guitar riffs, hairspray mortar and love poem shingles. No wonder people were so comfortable switching between the two.

Dan Badger quickly started getting his feet wet by playing in a number of bar bands over the years such as High Noon and Transit. Now he has moved on to recording a set of original tracks, with the first single “Kiss You” ready for release in June. 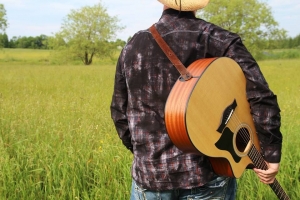 Badger has been recording his new country sound out of Cedartree Studios owned by Rick Hutt. Hutt is an accomplished producer for many notable bands including The Northern Pikes and Tom Cochrane. He has also been fortunate in gaining the interest of multi-JUNO award nominee Jaime Warren who happened to be in the studio during a playback and ended up assisting with co-writing and polishing for the latest single as well as a few of the upcoming tracks.

Badger commented on co-writing. “You have to open when you have something that is all your content and you feel like its an extension of you. It was a learning experience and I’m glad I went into being open about it. “

Dan Badger’s single “Kiss You” is a definite shoe-in for mass radio play and if new country is where your heart lies, you’ll be humming it for days! Watch for updates on the release date on his Facebook page @danbadgermusic or his website www.danbadgermusic.com.

You can also catch him playing at the battle of the bands at Club NV in Brantford on June 15th for Country Fest On the Grand.