We all know the age-old story of working bands making good by paying their dues. The band that travels from city to city, playing in dingy bars to no one but the bartender and maybe one or two old regulars that are content to stare deep into their cheap draft beer while ignoring the world around them. Nearly every band of our era has a back story that involves something like this. However, these days it seems as though the cover band reigns supreme in the eyes of bar crowd and original music has taken a back seat, or been brushed out the back door. Does original music no longer have a place in our local bar scene?

Checkerboard Floors have been successfully paying their dues in and around the Brantford area for nearly a decade and are no stranger to the struggle of having originals heard. Although they do play a number of covers, Checkerboard Floors have also released a debut album Art Project and are currently in the process of putting together a follow-up album.

Derek Palango (vocals/guitar) and I discussed how difficult it can be to get those original songs out there.

“I get the feeling that we will be playing and running through Led Zeppelin or a Sloan tune and people are having a great time, bouncing around and stuff and I’ll say ‘ok this one’s off our album’ and that’s when everyone goes for their smoke break. And not speaking for everybody but what my sense is from seeing some of that happening, if they haven’t been conditioned to like it, they don’t really want to give it the time.” Palango explained. “I will say there are people that stick around for it, they listen to it, and then they give us a big applause in the end. So there are people out there that care, its just I’m not sure that’s the prevailing mindset.”

I’m sure this is a scene all too familiar to most musicians. Why, is the question that comes to mind. We are all there for the music in some form or another but why stray from something fresh and new? Especially coming from such a high energy and talented band as Checkerboard Floors.

After listening to Art Project I found myself even more perplexed. The album is a time machine that will send you back to an easier time and place in music, soaked in delicious tele riffs, upbeat drum tempos, smooth vocals, bouncy bass and lyrics we can all relate to. It is a cocktail of rock, folk and that carefree 90’s sound that I must say I found rather refreshing. So why is something so versatile so hard to have heard by the crowd in front of you? 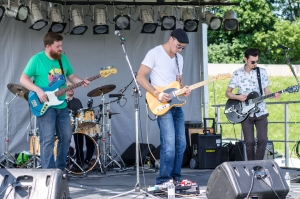 “I’m not sure why, I don’t want to blame it on this thing or the other. Is it pop culture as its evolved? Is it its too easy to skip stuff you’re not interested in, like with streaming and that kinda bleeds into your day to day as well? I wonder if that has something to do with it?” Said Planago.

So… is there still a place in our pubs for original music? Is paying your dues a dying concept? Has everything moved to the vast world of Spotify and YouTube? Maybe not just yet.

Palango said, “We have touched on things like streaming, more content on social media and so on. I think today these things are basically expected, and they ideally do help spread the word and get people excited to come see a show. Playing to a room is still the best way to connect with people directly and is sort of the whole point of playing music, at least for us. Even though we aren’t performing our album front to back everywhere we go, we are happy and lucky to get out there and be able to do what we do. Having some kind of format to more readily introduce new live music to people in places where it is not expected would be great, and I think many bands similarly in our position would enjoy and benefit from that.”

I’ve always maintained the idea that Brantford and it’s surrounding area is a lush cornucopia of musical talent. We are so blessed to have such great musicians and Checkerboard Floors, Derek Palango (vocals/guitar) Tyler Wilson (guitar/vocals) Matt Outerson (bass/vocals) and Kevin Barrie (drums/vocals) are definitely worth a listen. Their live show is nothing short of a blast and you are sure to find yourself humming along with songs from the album.

Get out there, dance, listen and appreciate the fruits of these hardworking musicians’ labour. After all, what would music be without ears to listen?

Check out Checkerboard Floors at their website www.checkerboardfloors.com, on Facebook, Spotify or at their next show at The Dickens in Burlington on October 27th.