If you’re going to accomplish anything in this world it takes hard work and determination. Or so they tell me. I don’t know what most of you were doing when you were sixteen, but I must say my early teen years were filled with everything but. I know that the words “I’m totally a morning person,” surely never left my mouth! In fact, they still haven’t. Meeting Ashley LeBlanc gave me a new outlook on just what a young woman is capable of when she puts her mind to something and has a goal in her sites. 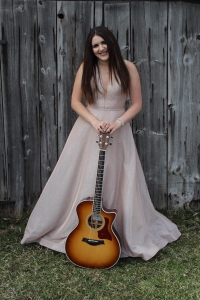 “I’ve been singing basically since I could talk,” LeBlanc said. Falling in love with country music as a young girl she has set out to reach those bright lights that have illuminated the great women of country music both past and present. Singing along with everyone from Shania Twain and Taylor Swift to Loretta Lynn and Patsy Cline, LeBlanc has managed to hone the warm and powerful voice of a female country singer that not many can match.

Surpassing that, she has now become a songwriter herself. Leblanc said, “I am always songwriting it helps me so much with problems I might be going through or stuff to get over or trying to figure something out in my life.” She has also been mastering the guitar for the past nine years. What else is one to do when they have the voice, the instrument, the songs, and the drive to move forward. Clearly, the next step is to record an album and get it out to the world. 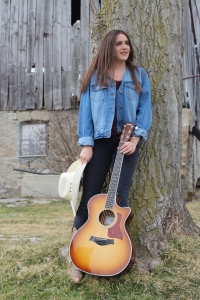 While talking with LeBlanc I realized she is indeed paying attention and giving credit to her life lessons and those around her. She explains about her song Everything Takes Time, “I wanna be a singer for my career and I’m the kind of person that wants everything now, and I had to realize that you can’t with this kind of career. Well, you can’t really with anything. I learned that you have to just go through it and learn. Everything you wanna do will take a certain amount of time and you just have to go with it no matter what.”

She also gives credit where credit is due. Multiple times throughout the interview she mentioned her wonderful support team. “I have some great people around me who are so supportive of me and that’s actually why I called the album “The Luckiest Girl In The World” and that’s why I wrote that song [title track] was because of all the love and support that I get from the people I surround myself with and it really does make me the luckiest girl in the world and I’m very fortunate.”

It would seem that that gratitude has not gone unnoticed and is being returned. The album is being played in rotation on radio stations in the U.K as well in Australia and her title track has so far hit number 52 on the UK Country Music Charts.

As for getting her music out to the local and surrounding populations, LeBlanc is busy playing local venues as well as performing at many fairs and festivals in the area. You can catch her at a variety of venues including the St. George Apple Fest as well as the Paris Fair. Check out her website www.AshleyLeBlancmusic.com for show dates and to check out her debut album.