The Group started in 1988. We started getting together once a month at the EthnoculturalFest building on 288 Murray Street. At that time we had 32 members from countries such as India, Pakistan, Kenya and the Philippines.

Because the group was mostly made up of newcomers to Canada the main objective was to share our lives, learn from each other, share our culture and discuss family, work and social issues. 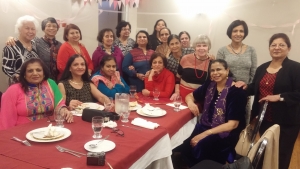 The organization has always been successful at achieving its goals. We have always had guest speakers both from within the group and outside of it who would speak about anything they have expertise in.

We had our first International Villages Festival in Brantford in 1990 and our group had a booth there. The booth provided demonstrations on how to play musical instruments, how to wear a sari, applying henna on hands and trying food from different countries. We also had folk dances. Everyone had a lot of fun and it was a huge success.

In 1993 we changed the name of the group from the Asian Women’s Association to the Multi-Cultural Women’s Association mainly because anytime someone presented to the group and came as a guest they decided to stay and ended up joining us. We quickly became a group of women from around the world.

We have a small annual membership fee and in December of each year we decide on a charity to donate to. Some examples include supporting flood victims in Kashmir, and adopting a child in a developing country or a local charity.

In closing I would like to thank all of our beloved members past and present and those who are no longer with us: Jyoti Joshi, Naseem Ladak, Amina, Asha Bhagrath, and Praba Kapur.

The strength of all of these women not here and here in this room make me proud to represent you and I look forward to many more years of such a wonderful group together.