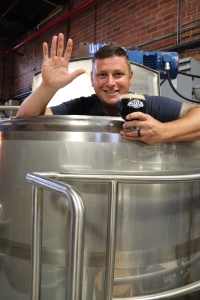 Teddy Scholten isn’t quite sure where his passion for quality beer came from, but thinks it may somehow stem from his Dutch/Irish heritage.

Like many, he began sampling suds while attending university and being a bit of a foodie, he began trying different brews. “But then I began to realize some of the beers I was drinking weren’t even beer, but pretty much sugar water turned into carbonated alcohol,” he said.

Scholten, who originally hails from Bright’s Grove near Sarnia, was living and studying fire protection engineering in Toronto, when he started to experience different cultures, foods and beverages. The work Scholten was studying focused on heat transfer and chemistry. 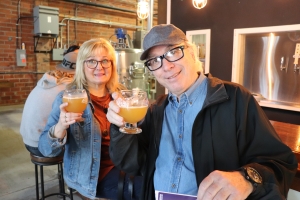 “With the experience of living in Toronto and taking fire protection engineering, we kind of got geeky with our beer. Basically the physics behind engineering helped us create really neat vessels and ways to make beer. We understood it in a different dynamic,” he said.

For years, Scholten and his pals would discuss the dream of their own brewery, while sitting around camp fires and social gatherings.

Meantime the grinding, daily commute from Hamilton to Toronto for work, made him realize he didn’t want to be one of those people that talks about hating their job. That’s when his girlfriend Nicole, now his wife, encouraged him to get the needed training to realize his dream. 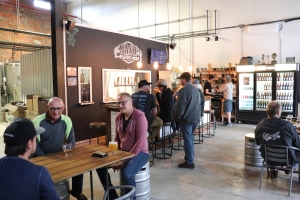 So, he left his secure profession and dove into beer so to speak, taking his training at the Seibel Institute of Technology in Chicago, which focuses on brewing science. “Quite an interesting course if you love beer and of course I did,” he said.

With the support of family of friends, he attempted to start the first craft brewery in Hamilton, but red tape and high costs stood in the way. Then, while looking at more affordable home prices in Brantford, he learned about the Artisans’ Village in West Brant, which would ultimately become the home of Mash Paddle Brewery Co.

Hard work, perseverance and a steady focus on their mandate “to be a quality craft brewery” has resulted in success. 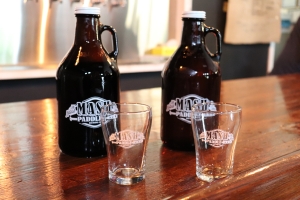 Teddy Scholten along with head brewer Matt Buzanko have been brewing hand crafted small batches of beer for the past five years and they can now boast “award winning” status. In 2018 they took silver at the Ontario brewing awards for their “North Strong Winter Warmer.”

Selections for sale at the brewery and speakeasy style bar include; unnamed pale ale, Dutchman’s Alt and Citranatti Bengal which as the name suggests, has a citrusy flavour.

Scholten says Brantford’s water is ideal for their stout beer which also has hints of coffee and chocolate. In fact, almost everything Mash Paddle uses to brew beer, is sourced from the best quality suppliers. “The best ingredient for beer is the people you’re sharing it with,” says Scholten.

Although Mash Paddle offers cheeses, meats and other snacks to munch while sipping, Scholten is pleased the city of Brantford has allowed food trucks into the area, allowing patrons a broader choice. 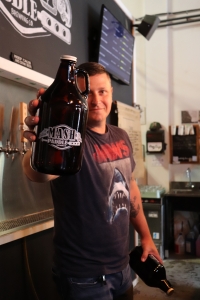 Along with pints and smaller servings, large 600 milliliter “growlers” and smaller refillable bottles are available for sale to take home. And Mash Paddle beers are also available on tap at several other local establishments.

Every other Saturday there’s live music at the brewery/pub, while on Sundays there’s a “vinyl vibe” with records spinning on the turntable.

When a new beer is launched on a Saturday afternoon, the space gets extra busy with patrons seated not far from the large metal vats where the brewing magic happens.

The Mash Paddle recipe for success has been simple, much like their mission statement; “utilizing local resources while producing quality sustainable craft beer.”

For more info, check out www.mashpaddlebrewing.com.