Last month I concluded my serialised history of the City of Brantford. I will now turn my attention to the County of Brant, but before we get there I will start with a background on the European conquest and settlement of the land in the Gulf of St. Lawrence and the St. Lawrence Valley. 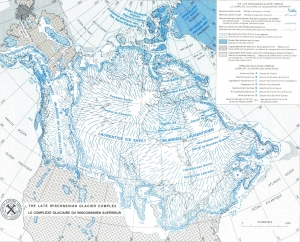 During the last ice age, most of Canada was covered by the Laurentide Ice Sheet. This Ice Sheet lasted about 100,000 years. During this period, the glacier advanced and retreated a number of times. The last advance of the glacier is called the Wisconsin Glacial Episode which reached its maximum extent into the Ohio Valley about 18,000 years ago. The advance and retreat of the glacier altered the geography of what is now the Great Lakes basin and the St. Lawrence River Valley.

The earliest human (Paleo-Indian) occupation of this area after the retreat of the ice can be traced back about 12,000 years. These people were nomadic and grouped together in small bands. They survived by fishing, hunting, and gathering plants. Between 10,000 and 3,000 years ago, also known as the Archaic period, the climate warmed. People began to congregate in specific areas. Near the end of the period they started to domesticate, breed, and cultivate plants. The Woodland period (3,000 to 1,000 years ago) that followed saw cultural and horticultural development and the establishment of permanent communities. During this period, continuous development in stone and bone tools, leather crafting, plant cultivation, and shelter construction occurred. Pottery manufacturing, which began in the Archaic period, became widespread. A full blown trade network amongst the Indigenous population was operating throughout the Great Lakes basin and the St. Lawrence River Valley.

The first recorded voyages of Europeans to North America were the Norse visits to Vinland around 1000 CE. Vinland referred to the area explored by the Norse which included Labrador, Newfoundland, the Gulf of St. Lawrence, and northeastern New Brunswick. 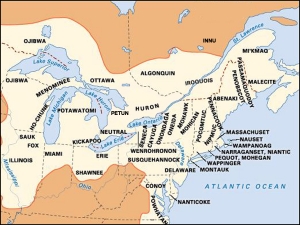 The subsequent recorded visit to what is now Canada was by John Cabot in 1497. The precise location of his landing has long been disputed but is largely considered to be either Cape Bonavista in Newfoundland or Cape Breton Island, Nova Scotia. He landed on 24-June-1497 and claimed the land for England. There is no record of Cabot travelling into the Gulf of St. Lawrence.

On 24-July-1534, Jacques Cartier landed at Penouille Point on the Gaspé peninsula and claimed it for King Francis I. Cartier was searching for a western route to Asia. Cartier had contact with the Mi’kmaq and the St. Lawrence Iroquoians. They seemed familiar with Europeans suggesting prior contact. He named this area – the Gulf of St. Lawrence and the St. Lawrence River, The Country of Canadas. Canada was derived from the Huron-Iroquois word kanata, meaning village. Cartier called the Iroquoian’s Canadiens. The term was later applied to the French colonists and then to all settlers in British North America.

On Cartier’s second voyage, he sailed down the St. Lawrence River to Hochelaga, present day Montréal. Cartier tried to establish France’s first permanent settlement in North America, near present day Québec City. He called the settlement Fort Charlesbourg-Royal. Four-hundred people arrived in the summer of 1541. The settlement was abandoned in September-1543 due to the harsh weather, scurvy, and attacks from the neighbouring Iroquoians. 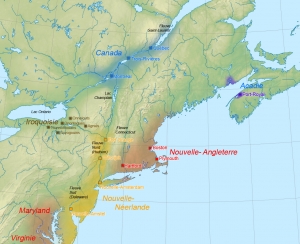 Pierre de Chauvin de Tonnetuit established a trading post at Tadoussac in 1600. Tadoussac is situated on the north shore of the St. Lawrence River at the junction of the Saguenay River. It had long been a place for barter and trade. It was the centre of the fur trade and whaling industries in the 17th-century.

Samuel de Champlain established the first permanent European settlement, named Kébec, now present day Québec City on 3-July-1608. Champlain explored the Ottawa River, Lake Nipissing, Georgian Bay, and the Great Lakes. He formed alliances with the Innu, Algonquins, and Hurons. These alliances put Champlain and the colony at odds with the Iroquois. The Algonquin / Hurons and Iroquois were rivals. Champlain served as the chief administrator of New France between 1620 until his death in 1635. Champlain encouraged fur-trading and farming. The French settlers became dependent on the Indigenous people for survival in this harsh climate, especially in the winter.

The Company of One Hundred Associates was organised by Cardinal Richelieu in 1627 to capitalise on fur trade profits and expand the colony in New France. The charter stipulated that colonists must be Roman Catholics. The company was more interested in the fur trade than in colonization and as a consequence the population of New France barely grew. It was only about 700 by 1650.

The colony saw little progress in its first 55 years as it was largely ignored by France, poorly governed, and dominated by the fur-trading companies. The French government did not provide an adequate military force to protect the colonists from attacks by the Iroquois thus discouraging emigration to the new colony. 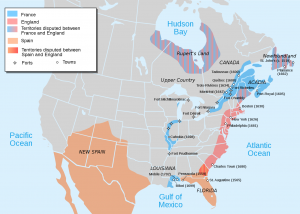 In 1663, with the encouragement of Jean-Baptiste Colbert, France’s Minister of Finances, King Louis XIV recognized New France as a Royal colony and established the Sovereign Council. The Sovereign Council was designed to strengthen the rule of law in the colony and provide strong governance. Colbert saw the potential of the colony to raise the standard of living in France by importing cheap raw materials from the colony and sending manufactured goods back.

In 1665, Jean Talon was dispatched to run the colony as Intendant. Talon was responsible for finances, justice, and public order. A regiment of trained soldiers accompanied Talon on his voyage to New France.

Talon wanted to change the colony from fur-trading dependent to agriculture based but realised he would need to increase the population. To encourage emigration to New France, the Crown starting paying for the cost of passage. Talon arranged for new settlers to be brought in, including 800 single women. He also began providing marriage grants and baby bonuses. Marriages with Indigenous people were encouraged to strengthen economic ties between the Indigenous people and the French settlers. Talon encouraged residents to clear more land, try new crops, raise more livestock; he started the first brewery, opened a tannery, and developed a shipbuilding industry. 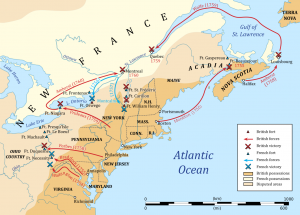 The fur trade exacerbated tensions between the Hurons and Algonquins and the Iroquois, each wanting control of the supply and trade of furs with the Europeans. French settlements in the St. Lawrence came under attack from the Iroquois from time-to-time which resulted in counter-attacks. The Great Peace Treaty of Montréal was signed on 4-August-1701 between New France and 39 First Nations to end hostilities between all.

In 1754 the population of New France reached 55,000. Contrast this with the British Thirteen colonies that had a population of almost 1.2 million.

Conflict arose between the British and the French in North America in 1754. This conflict preceded the Seven Years’ War in Europe by two years but is generally referred to in Canada as the Seven Years’ War. French Canadians call it Guerre de la Conquête. Each side was supported by their Indigenous allies. The dispute began over control of the fur-trade at the Forks of the Ohio River. English traders were expanding their trade in areas France believed was their exclusive domain. 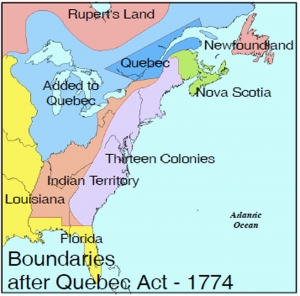 The decisive battle for New France was the battle on the Plains of Abraham. The battle ended a three month siege of Québec City by the British. On 13-September-1759 British troops commanded by General James Wolfe defeated French troops under the command of General Louis-Joseph, Marquis de Montcalm. The battle took place on a plain just outside the walls of Québec City on land once owned by a farmer named Abraham Martin. The battle lasted about 20 minutes and both Generals were mortally wounded. Montréal fell to the British on 8-September-1760.

The Treaty of Paris, signed on 10-February-1763, ended the Seven Years War. France’s colony of Canada became British territory. The Royal Proclamation of 1763 issued by King George III on 7-October-1763 established the new Province of Québec. By 1765 the population of Québec was about 70,000.

In 1774 the Government of Great Britain passed the Quebec Act. The Act expanded the boundaries of the Province of Quebec, allowed public office holders to practice the Roman Catholic faith, recognized French language rights, defined a structure of government that included a governor supported by an appointed legislative council, and allowed the use of French civil law in civil matters.

Next month, I will focus on the settlement and political divisions of the land in what would become Ontario. 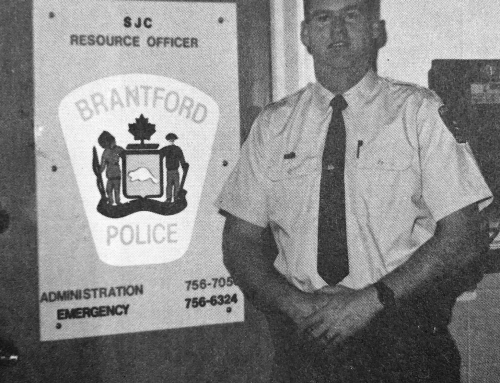