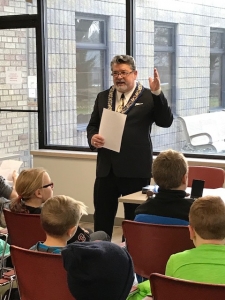 The County of Brant’s Mayor David Bailey welcomed 55 grade five students from Burford Elementary School on December 13, 2018. The students filed into the Burford Administration Office for a quick lesson in municipal government.

Mayor David Bailey covered a range of topics including the roles of a Mayor and Councillors, how the wards are divided within the County, how citizens can come to Council to raise a concern or express an idea and how Council makes decisions. 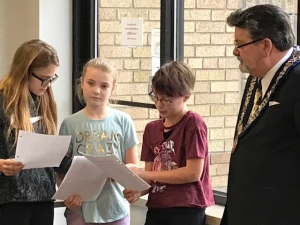 “I was so impressed with the children,” said Mayor David Bailey. “They asked great questions throughout our time together. They were so engaged and interested.”

A highlight of their time together included several students pitching important proposals for the Mayor’s consideration. 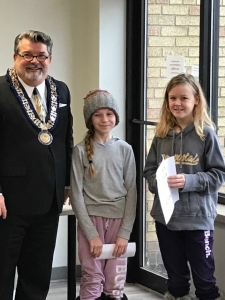 “The student’s proposals ranged from homeless initiatives, to protecting animals and suggestions to offer new recreational activities,” said Mayor David Bailey. “They had given their proposals a lot of thought.”

The children also learned about all the different jobs that municipal government can offer.

“I hope that some of these children will consider a career in municipal government. There are so many diverse opportunities such as being paramedic, firefighter, working with the roads crews or being an engineer,” said Mayor David Bailey.

One child shared that she hopes to be the Prime Minister one day. “I shared that ever since I was young, I wanted to be the Mayor,” said Mayor David Bailey. “My hope is for these children to chase their dreams and never give up.”