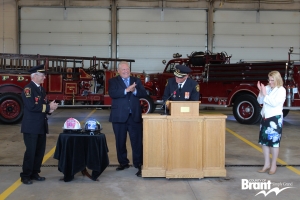 Premier Doug Ford and Solicitor General, Sylvia Jones, attended the Official Fire Hose Cutting Ceremony to kick off the 120th anniversary of the Fire Fighters Association of Ontario Convention. This year, the convention was hosted by the County of Brant Paris Firefighters Club.

“We are honoured the Premier and Solicitor General attended the opening ceremonies,” said Captain Mark Robinson with the County of Brant Paris Fire Station and FFAO Convention Co-Chair of the Planning Committee. “Their attendance recognizes the importance of this event and the Firefighters who volunteer in their rural communities to protect the lives of others.”

“We are very pleased with the opening ceremony and are looking forward to a full week of events,” said Robinson. 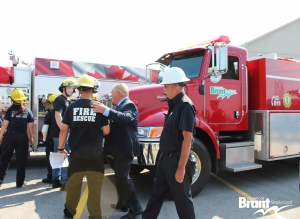 Approximately 300 Firefighters and their families from rural Ontario are attending this year’s event. The event includes a number of Firefighter training courses. As well, the community is invited to attend a number of events.

On Saturday, August 3 and Sunday, August 4 from 11:00 am to 5:00 pm, the community is invited to attend the Paris Agricultural Society where there will be vendors, food trucks and activities for the whole family. Activities include Firefighter games and competitions, Junior Firefighter (kids’) games and obstacle courses, Red Knights Motorcycle Club Show and Shine (Saturday only) and check out the collection of antique fire trucks. Donations will be accepted at the door.

The community is also invited to attend the Fire Fighters Association of Ontario Memorial Parade and Ceremony on Sunday, August 4. The parade honours the Firefighters who have lost their life in the past year. The parade will begin at 9:00 am at Kings Ward Park, Paris, move south on Broadway Street, turn east on Mechanic Street and end at the Cenotaph on the corner of Mechanic Street and Grand River Street North. The service will begin at 10:00 am.

For more information about the public events, visit the County website at www.brant.ca/2019FFAO or visit www.ffao.on.ca.