Fast Moving Thriller Chosen for 15th One Book One Brant 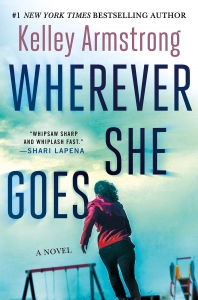 Book Cover of Wherever She Goes

How does a woman who grew up in a typical middle class London, Ontario family, become a globally popular fiction novelist?

“It comes from being a massive reader as a child and growing up continuing to read, which just sort of naturally turned into – I want to write,” says Kelley Armstrong.

Armstrong is the renowned Canadian author behind a string of successful books including, the Otherworld urban fantasy series, the Cainsville gothic mystery series and the Darkest Powers and Darkness Rising teen paranormal series. 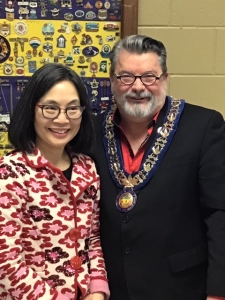 The number one New York Time bestselling author’s latest novel is a crime thriller that follows the relentless story of a woman with a shady past, trying desperately to prove she saw a child being kidnapped. Wherever She Goes is the first of the Rockton thriller series and it’s this year’s One Book One Brant community read.

The arts where encouraged as hobbies, but never as serious career goals in Armstrong’s family, so she attended university and college, eventually becoming a computer programmer. She says she’s grateful for the encouragement to pursue a more practical career.

Many young budding writers approach her for advice on what to study in college or university to become a full-time novelist. “I tell them to take whatever they enjoy doing while trying to get published,” she says.

Computer programming expertise was useful for the backstory in Wherever She Goes. The main character is a former female hacker, who has left behind a life of crime for a respectable family life, that doesn’t go quite as planned. 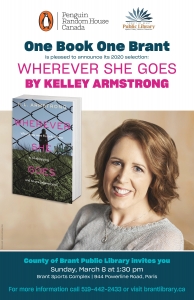 “You’re always pulling just a little bit of yourself, not too much, but some little thing that you can say, I understand this,” she said. Armstrong grew up in the early era of computers, where she was programming Commodore 60’s and 64’s as a teenager.

“So I could take that and say, I remember what it was like to be a girl of that age, having an interest in computers and I can write that part of her personality,” she said.

Her first series, Werewolf One, Bitten was turned into a screenplay and ran for three seasons on the Space network in Canada and the Sci Fi Channel in the U.S. and in the U.K.

Armstrong’s name appears as K.L. Armstrong on the cover of Wherever She Goes, so readers that know her as a writer of fantasy, but aren’t fans of the genre, won’t be dissuaded from checking out her latest crime fiction.

Wherever She Goes is a believable, fast moving, action packed thriller, full of twists and turns.

Anyone who signs up to read the book at any County of Brant Public Library branch, will be entered to win prizes, including the grand prize of a Winnovo tablet with a keyboard and case.

The draw will take place at the 15th annual One Book One Brant Meet the Author Event at the Brant Sports Complex, at 944 Powerline Road in Paris, on Sunday March 8th at 1:30 p.m.

For more information, visit brantlibrary.ca or visit any one of the five library branches in Burford, Glen Morris, Paris, Scotland and St. George.