Dedication Ceremony for New Stones at the Paris Cenotaph

The Royal Canadian Legion Branch 29 will hold a ceremony on Sunday, October 28, 2018 at 2:00 pm at the Paris Cenotaph in downtown Paris to dedicate two new stones that have recently been added. The stones bear the names of the Paris soldiers, including Nursing Sister Dorothy M. Baldwin, who were killed during World War I and World War II. 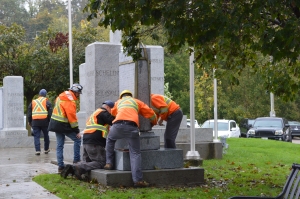 The project was a joint effort between the County of Brant Heritage Committee and the Royal Canadian Legion Branch 29 Paris and is just in time to mark the 100th Anniversary of the end of WWI.

“This was a long standing dream of three Paris men; Jack Allison, Ted Finn and Ken Sinclair,” said Carol Moore, Co-Chair of the project and Development Services Clerk at the County of Brant. “In the spring of 2017, County of Brant officials gave the go ahead to the Paris Legion to add the additional stones.”

Ted Finn, who lobbied for the addition of the stones for many years, passed away in March 2018. In Ted’s honour, his daughter, Dianne Finn, donated the cost of the stones.

The balance of the project funding, which included over $20,000 in repairs to the original monument, was donated by the community. As well, Brian McIsaac, owner of Ingham Monuments in Brantford, donated the cost of the stones and time to design and install the new stones.

The names of those killed in WWI, which included correct name spellings, were supplied by the Great War Centenary Association volunteers; Geoffrey Moyer, Meghan Cameron and Andrew Iarocci. The volunteers spent years researching each of the soldiers who were killed in the County of Brant and the City of Brantford during World War I.

For more information about the Dedication Ceremony or this project, please contact Carol Moore, Development Services Clerk at the County of Brant, 519-442-6324 x 3013 or carol.moore@brant.ca.