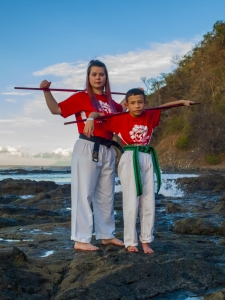 Once again D & D students brought home some hardware for their efforts in the ring, but they also helped procure 87 backpacks, loaded with school supplies for students in the third world country.

Club owner and instructor Bryan Davis says his wife Linda made it happen. “She does it all and we get other people from our club and other clubs to basically donate the backpacks and all the stuff in them. She sets up the contacts, the shipping, all of that,” he said.

All of the backpacks went to one school. Schooling in Costa Rica is free, but students have to provide their own supplies and it’s tough for parents to buy what’s needed. 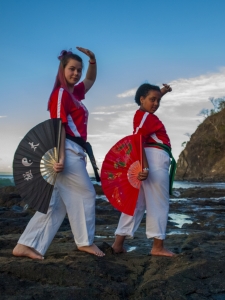 Meantime Davis says D & D’s students did better overall in competition this year. “Sensei” Kelsey Cooper wound up with four gold medals. That means when the 22-year-old returns to the event next year, she’ll be competing in one of the “Triple Crown” rings.

A strong positive attitude is amoung the most important things Davis works to instill in his students and it’s among the main reason’s parents enroll their children in the program. “Basically, any of the kids here know that it’s not just here, it’s outside of here in regards to respect and doing what they need to do,” he said. And he adds they won’t hesitate to demote students who aren’t exhibiting the right attitude and amount of effort.

D & D accepts new students year-round. “Anybody looking is always welcome to come in and we always do a little introductory special for $25.00 to let them try it out and make sure they like it,” he said.

And Davis says he encourages people to shop around, see what’s available, what they might like, to make sure they don’t get locked into contracts and that the operation is properly sanctioned. He points out the government has recently begun cracking down on a number of laws. 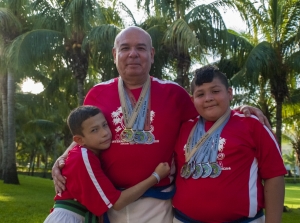 “Technically as soon as you put your hands on someone, you’re committing assault so if you’re not properly sanctioned, you can be legally charged,” he said. D & D United Martial Arts for example requires sanctioning from the Ontario Karate Federation (OKF). The rules are especially enforced during tournaments.

“I know of five tournaments last year in Ontario that were shut down and or fined, because they didn’t go through the proper channels of being sanctioned,” says Davis. And he says he knows after tournaments are brought under control, the OKF will begin focusing on clubs.

Davis believes the inclusion of Karate in the 2020 Olympics is the reason for the rules finally being enforced. He also points out Karate will only be included in the Olympics for the one year, due to Japan’s insistence on including its national sport.

Unfortunately, by the time the decision was made to include Karate, participants had already been chosen and it doesn’t look like Canada will be included. Davis says it’s disappointing because he feels a few of the girls from his club, could have made an Olympic team.

Meantime, Davis says one of their biggest fundraisers of the year is a Halloween silent auction, dinner and dance at the Dunsdon Legion every October. This year’s event is scheduled for October 24th and auction items include autographed items from “Mantis” of the Guardians of the Galaxy series, wrestlers like; “The Undertaker,” “Sergeant Slaughter,” Ron Simmons and even a couple of the Power Rangers, Amy Joe Johnson and David Yoest.” 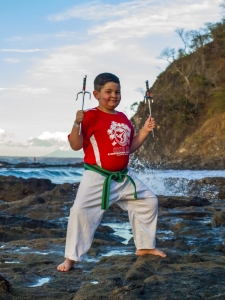