Clowning Around Can Get You Somewhere

It started in Birmingham England. Both parents came from there but never meet there. They met in Canada. It was in Brantford. Both served in WWII. She was a motorcycle messenger in the RAF. He joined the Toronto Scottish. Golf was his passion along with his brothers. In fact, all were Golf Pros. They both came to Canada for a better life. They met through Dad’s oldest brother after the war. There was a large age gap. So much so, his brother introduced them through his daughter who had a friend! 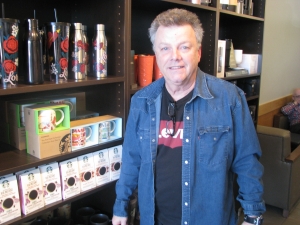 Doug Hunt had a great start in life filled with a family that was passionate about life and each other. Being the youngest of three boys one would think he would have been outgoing and adventurist. Not so. In fact, he was very shy. Even extremely shy. Doug Hunt you say? His father was concerned enough to teach him juggling. Yes, his father juggled. Little known fact back then was that Golf Pros and caddies, when not engaged, would learn to juggle golf balls in various ways. From hand to hand, bouncing off the walls, between each other and so on. His Dad thought it might help “get him out of his shell.” It worked. He became a bit of a “cool guy” because of this talent. He is a self-taught “slight of hand” artist. But still there was this shyness. He began to develop the “entertainment” bug. His first few gigs were as a “mime” magician. (Didn’t have to talk you see) Once that challenge was met and overcome, he continued to develop an entire field of entertainment. Clowning, juggling, card tricks, jokes, stilt walking were all used to bring a message. At first it was just entertainment. Make people smile and laugh. However, there was more to come and all the fun included a message. Always positive and always ways to overcome adversity. This would come back to him personally.

His older brothers went to school in a one room School House just outside Brantford. He went to Glen Morris School. During his school age years is where he began to fight for his place in society. Lessons learned from Mom and Dad payed off. He attended Paris District High School. Again, using the skills he developed to overcome his shyness payed off. From High School he attended Conestoga College for Recreational Therapy Leadership. You see, in his family life, Doug was blessed with a baby sister, Valeri. She had Downs Syndrome. He became the “go to” guy in the family for care when Mom or Dad wasn’t available. He has never seen that as a chore but it did keep him from the usual social activities of a teen. He says it was a blessing. He considers her the most influential part of his life journey turning points.

Doug volunteered in Brantford through the Parks department. It wasn’t a bad thing that his father had moved to that department as Superintendent of Mohawk Park. As a Leader-in-training, he began to refine his love of working with kids and people with disabilities. He volunteered at W. Ross McDonald School, Andrew Donaldson and Community Living. All part of a plan looking to the future as a career.

His care for Valeri was setting a path that he couldn’t resist. He says he learned more from her then she learned from him. Once he settled in on this path he then got hired to be a Leader in the Parks department and did the hiring for the summer. He hired Katie. The future Mrs Hunt. He says it was the last time he was ever the boss. He made it clear that if you got him, you got Valeri. Katie was all in. 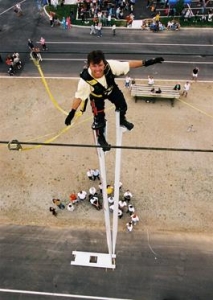 Doug’s placement during his course at school was Markham Participation House. After all the volunteering and the course, Doug was made aware that PH Brantford was being built. He attended the sod turning where he met Johnny Wayne of “Wayne and Shuster.” Doug asked for a job. Johnny told him he was just the comedian. He did get a construction job that lead to a rec-supervisor position. 40 years later, Doug has been a huge provincial influence in the field of adult recreational leadership.

“Doug The Great” has more than earned that name through a life lived using juggling, clowning, magic, balloon animals, stilt walking, golf and motorcycling. His influence and impact on the lives of people in need is a testimony of his love of life and his love of people. People have recognized his many contributions over the years and his resume reads long and thick: Queen’s Golden Jubilee 2002, Queen’s Diamond Jubilee 2012 Kiwanis Walter Zeller Fellowship Award 2014, Brant Community Foundation Kindness Award 2918. He believes in the life situation he calls “Falling Forward.” His talks include lessons he has lived. From his Guinness World Record Tallest (50’9”) and Heaviest (137 lbs) Stilt Walk and his Guinness World Record Most People on Stilts at North Park High School May 15 2008 to reaching his 63rd B-Day, Doug sees life as “Falling Forward.” He is now dedicating that “Do It” mentality caring for his love Katie. She requires his attention. Katie is in good hands. Not bad for a clown!