In June 2018, Ferrero Canada Ltd. announced a generous donation of $100,000 to the City of Brantford to help restore the City’s waterfront trails that were damaged during the February 2018 ice-jam flood. On Saturday, June 15th, the City of Brantford unveiled a plaque and green space in Ferrero Canada’s name, recognizing the Company’s desire and donation to help restore City trails that had been devastated by last year’s flood.

On Wednesday February 21, 2018, the City of Brantford declared a state of emergency in response to the flood event that remained in effect until February 26, 2018. The aggressive and unexpected surge of water caused significant infrastructure damage and flooding downstream. The extent of the damage to City assets, including the trails and tree canopy, specifically within Gilkison Flats and east of the Grand River (from Lorne Bridge south to Brant’s Crossing) was extensive, and required specialized equipment to restore. 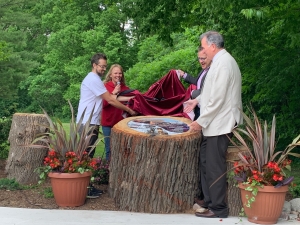 “As one of the largest employers in the area, we were compelled to give back to the City and to help in the recovery efforts,” said Fabrizio Secco, Managing Director, Ferrero Canada – Industrial Division. “We’re honoured and humbled to be recognized by the City for something that we felt was simply the right thing to do. These trails are important to our community and I’m proud that Ferrero was able to play a small part in their restoration.”

Secco was joined by more than 60 employees from Ferrero’s Brantford facility to help with a trail clean-up prior to the plaque unveiling. “We’re all part of the community and many of our employees use these trails daily. This is our way to keep giving back and to ensure the trails can be enjoyed by everyone.”

Ferrero is a family-owned company and has grown internationally because of a strong sense of values and unwavering support for employees, consumers and communities through its “work, create, donate” philosophy. This is more than just a belief – it’s firmly rooted in Ferrero’s DNA and is based on a sense of responsibility and the importance of creating value to share value. Ferrero Canada employs about 900 employees at its Brantford facility and is a significant contributor to the community and surrounding area.

“This is a very generous donation by a valued partner in our community so we had to acknowledge it in a special way, which is what today’s unveiling was all about,” said Brantford Mayor Kevin Davis. “We are very grateful to Ferrero Canada for their significant contribution to the massive clean up effort required to restore the City’s trails to their pre-2018 flood condition.”

About Ferrero
Founded as a family business in Alba, Italy in 1946, Ferrero is the third-largest company in the global chocolate confectionary market, with global sales of over $12 billion, distribution across more than 170 countries, and a workforce of more than 30,000 people across 55 countries.

Ferrero entered the Canadian market in 1974. Ferrero Canada markets some of the country’s most loved and iconic brands, including NUTELLA®, FERRERO ROCHER®, FERRERO COLLECTION, RAFFAELLO®, TIC TAC®, KINDER®, KINDER BUENO® and KINDER® CHOCOLATE. Ferrero further solidified its Canadian presence when it opened a production facility in Brantford, Ontario in 2006. Today, that facility manufactures NUTELLA®, NUTELLA & GO, FERRERO ROCHER®, and TIC TAC® mints andTIC TAC® Gum for the Canada and US. It also packages and distributes KINDER® products across North America.

About the City of Brantford
The City of Brantford, Ontario is a progressive city located in Canada’s economic heartland. It is a community with a rich history shaped by its unique and attractive location on the Grand River and proximity to major consumer and industrial markets throughout North America. Progressive revitalization efforts have resulted in and diverse mix of old and new, offering a vibrant atmosphere for residents, visitors and businesses. The City of Brantford is committed to promoting economic diversity, quality employment opportunities and efforts to enhance the quality of life of all its residents.