On behalf of Brantford City Council, Mayor Kevin Davis is pleased to announce that Brian Hutchings has been selected as the City’s new Chief Administrative Officer, effective August 6, 2019.

Mr. Hutchings brings a wealth of diverse leadership experience to this new role. For the past seven years, Hutchings has held the position of Vice-President, Administration at Brock University where he was instrumental in helping guide the institution through a strategy to address multi-million-dollar operating deficits and achieve balanced budgets over consecutive years.

Hutchings obtained his Bachelor of Commerce degree in accounting from Saint Mary’s University followed by his CPACGA designation. He holds a certificate in Human Resources Management and has completed the Queen’s University Public Executive Program. In 2014, he received a Master of Laws degree from the University of Toronto. 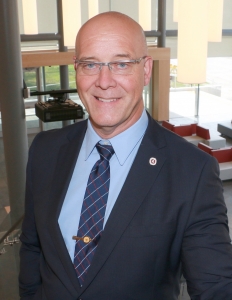 Prior to his successful tenure at Brock, Hutchings was an integral part of the Niagara Region leadership team, where he served as Commissioner of Corporate Services overseeing Finance, Human Resources, Information Technology and Legal Services. Hutchings also served Niagara Region in the role of Commissioner of Community Services overseeing the region’s implementation of Ontario Works, Homelessness programs, Housing, Children’s Services and Seniors programming.

“Brantford is a thriving community undergoing an exciting transformation,” said Hutchings. “And I am really looking forward to applying both my municipal and business experience to support Brantford’s social and economic development. I also look forward to the opportunity of working closely with Mayor Davis, Council and City staff, and to engaging with the Brantford community that I will be honoured to serve.”

Reporting to City Council, the Chief Administrative Officer is the City’s senior executive manager, overseeing all City Commissions and departments, including over 1,800 employees.

“I along with members of Council look forward to working with Brian to implement the City’s various priorities,” said Mayor Kevin Davis. “After an extensive search, we are very confident in our choice in Brian and thrilled that he is ‘coming home’ to the municipal sector. His in-depth understanding of municipal operations combined with his demonstrated competence in strategic planning, finance, and community partnership building will be tremendous assets to the City’s operations.”

In 2003, Hutchings was honoured as the Citizen of the Year by the Grimsby Chamber of Commerce and in 2008 he was presented with the Niagara Award from Niagara College in recognition of his contributions to the Niagara community. Hutchings was the recipient of the 2011 Partnership Award, presented by the Business Education Council, and also received an honorary diploma from Leadership Niagara in 2012.