Celebrating the County of Brant! 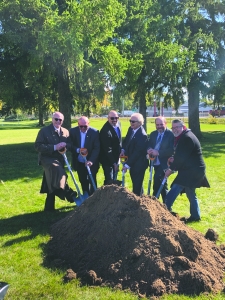 Breaking Ground in the County of Brant – Submitted Photo

Maclean’s Magazine’s ranking of the County of Brant, as one of the best places in Canada to live, was no fluke. Of 415 communities across Canada, Brant was ranked seventh based on three criteria; wealth and economy, crime rate and even the weather. Although they can’t claim responsibility for the weather, there are opportunities to influence the county’s successful wealth and economy.

Director of Economic Development and Tourism, Russell Press, says “from an economic development standpoint it will take an ongoing effort and strategy based approach around four pillars to ensure continued success.” They include; growing a more diversified local economy, driving investment to the County of Brant, building the county’s downtown core areas and a focus on communications and engagement.

Press says growing the local economy means “growing and leveraging what comes naturally.” Agriculture is one of the key sectors within the County and his team is looking to continue its’ support by investigating possible ways of generating more revenue streams for agri-business operations including agri-tourism, agri-innovation and becoming experts in agri-source funding opportunities. 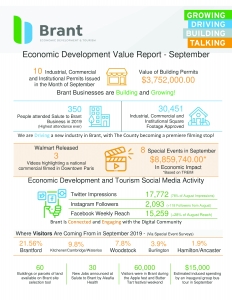 “Recently we were identified by higher learning institutions for opportunities in innovative engagement such as helping to mitigate soil compaction. We’re in a good area geographically that allows access to acreage while remaining near to their centres of learning,” he said.

The annual “Salute to Brant Business” event, one of the key ways by which the county looks at engaging the business community, includes an awards presentation of businesses nominated by the public. Winners are chosen and highlighted in six categories. Press says the latest event was a big hit, “360 people attended, it was completely sold out and we even had a major announcement of 30 new well-paying jobs coming to the County.” 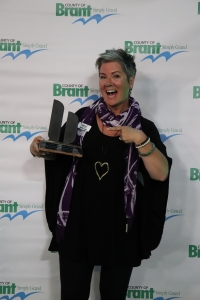 To help drive investment to the County, Press says they’ve made it a bit easier for site selectors to take a look at available lands in the County by investing in a site section tool on the County website and it’s already resulting in inquiries.

Press says they also work to make sure “the process for investment and expansion is one that’s top of class.” The aim is to make it easy to reach the right person within the County. “If that person doesn’t have the information, we know where to go and find it,” he says.

Building Brant’s downtowns is another key pillar. Businesses in the downtowns looking to improve facades can be eligible for funding, provided they meet the criteria. Although it doesn’t have to include historical properties, it does involve maintaining the look and feel of the existing facades. Downtown businesses in St. George, Paris and Burford, have taken advantage of and continue to access the funding.

Transparency is also important to Brant’s Economic Development Department. The ‘Value Report’ on their website and social media shows the value of some of the economic activity taking place in the County over the previous month. Some indicators include the value of industrial building permits issued, economic impact of events and origin of visitors to the County. “It’s a report designed to give a results based snapshot of economic activity over the last month. It also helps us identify opportunities, gaps and trends we should be aware of,” says Press. 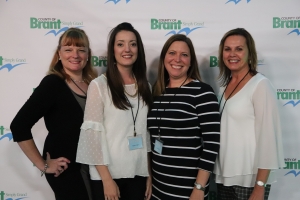 Also, under growing a more diversified local economy is filming. The County of Brant’s popularity as a film location is growing as producers leave the GTA looking for that ‘small-town,’ rural landscape or river valley scene. Press says, it’s a delicate balance to provide what film companies need while also making sure there is as little disruption to the community as possible, “we have work to do and we will continue to seek that balance.”

Netflix, Disney and Hallmark have all shot in Brant with Walmart recently using Downtown Paris for its fall fashion commercial. HGTV is shooting a series in the County currently and HBO recently submitted an application to film.

Meantime, Press says being designated the seventh best community in Canada to live wasn’t an accolade they purposely were chasing, “We are always looking for ways to do our part to help Brant develop. It was sure nice to receive the call from Maclean’s notifying us of our ranking. It shows Brant Works!”

Follow County of Brant Economic Development by visiting investinbrant.ca and subscribing to the newsletter and by following @InvestinBrant on social media.