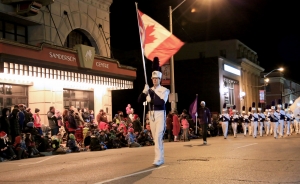 Christmas themed movies are one of Abigail Decaire’s most favourite things about the holidays. As chair of the 44th annual JCI Brantford Santa Claus Parade on November 24th, she had some influence in choosing the event’s theme of, “A Cinematic Christmas.”

“One of my favourite Christmas traditions is getting together with my family and watching the Christmas movies and having those stories that inspire our Christmases,” said Decaire. So, don’t be surprised to see, The Grinch, Elf, Rudolph, or Scrooge on this year’s floats. Even the irreverent movies such as, “National Lampoon’s Christmas Vacation” may have their place. In fact, Decaire admits it’s her fiancé James’ favourite holiday film. 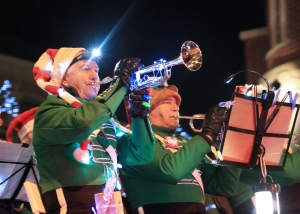 And it seems parade enthusiasm is especially high this year. At the time this article was written, there were 23 entries and five marching bands, including the highly sought after Burlington Teen Tour Band. That compares with a total of 21 entries for the 2017 parade at this time. The deadline for entries is November 2nd. So make sure to get your float registered quick.

As always, donations for the Brantford Food Bank will be accepted along the route. “The Jaycees really like to partner with the Food Bank and help them by collecting cash, or a simple donation of (non- perishable) food,” said Decaire. JCI alumni will also be out with their “money buggies” to accept donations along the route to help with parade costs. 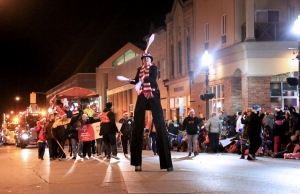 The Brantford Rotary Club’s “Clown for Kids” will also be part of this year’s event once again. Rotarians, who raise a minimum of $200 for their cause, get to dress up as clowns and participate in the Christmas fun.

Deciare, who is new to Brantford, hails from Windsor, Ontario and says she’s amazed at the support the Brantford night-time parade receives. Upwards of 20,000 people turn out annually. “To be part of getting a community together and getting families out and spending time together and watching floats with lights and everybody happy, really does affect how the community shows support for one another,” she said. 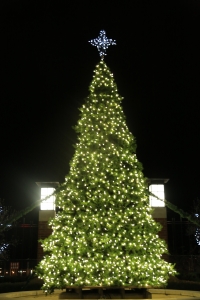 Brantford is still one of the few communities that stage a night-time parade and Deciare is hoping for an abundance of brightness this year. “Let’s basically make the streets glow, just from our floats,” she urged. Vendors will also be selling glow sticks, so those who turn out to watch can help brighten things up too. Decaire also urges everyone; especially “the kids” to wear something illuminating.

Deciare admits she is a huge fan of everything Christmas including, snow, curling up in a blanket, fuzzy sweaters and socks, drinking hot cocoa, or apple cider.

“Christmas is also about giving and not everybody has the opportunity to open up a bunch of presents under their Christmas tree, so personally my wish is for everyone to really help out the Food Bank, even if it’s just a small donation,” she said.

As it did last year, the parade route starts at Colborne and Stanley Streets and ends at Harmony Square, where the Parade After Party with Santa and Mrs. Claus will take place.