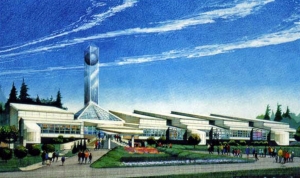 Artistic rendering of the icomm building in 1990. (photo courtesy of the Brant Historical Society)

The interactive communications complex, named icomm in 1990, saw its cost projections go up while attendance projections went down. The complex was caught between the building boom of the late 1980s and the recession of the early 1990s. The cost of the facility had risen to $23 million in February 1990 from $15 million a year earlier. Predictions of 700,000 annual visitors was revised down to 450,000. The complex was planning a July 1991 opening but this was pushed back to the spring of 1992 so all of the exhibits could be completed. The local fundraising campaign to raise $3 million was going poorly. By April 1991, the price for the complex was now at $29 million which meant that $6.6 million was required from the provincial and federal governments to keep the project going. An audit of the books did not reveal any fraudulent activity but it did reveal poor project and cost management. The City and some corporate backers provided money to complete the building which opened to the public, empty of displays and content, in October 1991. Over 5,000 people attended the open house. Project costs continued to climb to $31.4 million in 1992 while attendance figures were again reduced to 225,000, and the opening was pushed back to the fall of 1993, then later revised to sometime in 1994. The provincial and federal governments contributed $3.6 million to the project in 1992 to stabilise the operation. An $8 million national fund-raising campaign aimed at the telecommunications industry in Canada was launched in May 1992. This campaign was not successful as businesses in Canada were dealing with the effects of the recession.

In 1992, City Council changed the name of the street to icomm Drive from The Ring Road in anticipation of the museum’s opening. By February 1993, $3 million was still needed to complete the exhibits and a secret report prepared for the museum president recommended that the project be shut down. On 2-March-1993, the Expositor reported that icomm had been cancelled. $20 million of public and private money had been invested in the project. The City assumed the building on 30-March-1993. A scaled down version of the museum was proposed by a group of citizens but there was too much uncertainty in their proposal. City Council decided to mothball the facility in September 1993. A number of possible uses for the building were contemplated including: a museum, arts studio, Mohawk College campus, business incubator, research centre, hotel, and casino. 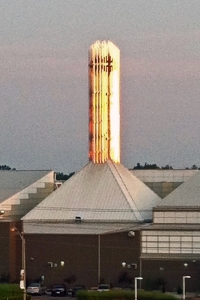 The Icon, the aluminum tube sculpture that sits atop the Casino, formerly icomm. The sculpture, shown here at sunset, looks like a lower case i. It represents both a beacon and a receiver. It was designed by Canadian artist Ron Baird and his wife Linda. The inner portion is a 30 foot, 18-inch square structure housing 32 strobe lights. It was placed on 13-September-1989. It is surrounded by a 50 foot aluminum tube sculpture that was put in place in November 1989. The sculpture was installed by Taylor Construction. (photo by the author)

Businesses and organisations investigated the potential use of the facility over the next three years. Uses included a technology and media centre run by a consortium of colleges, a university, a college to study telecommunications, a telemarketing centre, and a television production facility.

In September 1994 a pending lease agreement was reached with Canadian Sportfishing Productions to move their production facilities into the building. The company encountered financial difficulties and withdrew their proposal.

A suggestion first proposed in 1992 was to convert the building into a casino. The province was studying allowing casino gambling in Ontario. When the icomm project was cancelled a Yes Casino for Brantford committee, spearheaded by Mike Tutt, began lobbying the provincial government to locate a casino in Brantford.

In 1996, the provincial government began to look for sites to establish a charity casino. Brantford was selected as one of 44 sites in 1997. Over the next few years, there was a pitched battle between those who wanted to see a casino located in Brantford and those who did not. Mayor Friel was not a supporter. The Expositor tried to measure the community’s feeling towards a casino through a write in campaign. The result of the vote was two to one against the casino. With that result, Council voted unanimously against hosting a casino. The Yes Casino for Brantford committee lobbied for a referendum during the 1997 municipal election. The referendum showed 55 percent of voters supported hosting a casino. Council changed its position on hosting a casino after this.

RPC Anchor Gaming was selected by the province to run the charity casinos. The company offered the City $4 million for the icomm building in February 1998. The anti-casino forces continued to lobby City Council to overturn their decision going as far as appealing to the Ontario Municipal Board to quash the rezoning of the icomm property. In late 1998, the province decided not to create 44 casino sites but rather only four and to have them operated by the Ontario Lottery Corporation rather than RPC Anchor Gaming. The OLC picked up RPCs option on the icomm building in January 1999. OLC would spend $24 million to renovate the building. 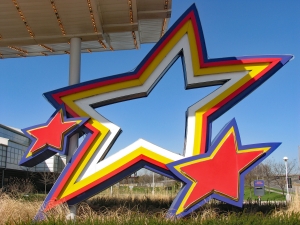 Logo of the Brantford Charity Casino, 1999. (photo by the author)

City Council organised the Brantford Casino Impact Study to prepare for the opening; to measure the effects the casino would have on the City. The Casino held an opening gala on 17-November-1999 for 1,800 people. By February 2000, the casino was so busy it started to operate 24 hours a day, 7 days a week. The expectation was that the casino would contribute $1.2 million dollars a year to the City as the City’s share of slot machine revenue. The casino’s first quarter revenue sharing cheque to the City was $1.5 million. It was the most financially successful of the four charity casinos in the province. The other charity casinos were in Sault Ste. Marie, Point Edward (Sarnia), and Gananoque. Attendance reached one million on 8-June-2000, just after 172 days of operation.

There was controversy on what to do with the casino money. After much deliberation, debate, and public outcry City Council decided to direct the money to a special fund used for capital projects and community investments. The money would not be used to reduce property taxes or other operational purposes.

The saga of the Brantford Southern Access Road continued into the 1990s. The roadway was conceived in the 1960s as a limited access highway that would loop though the southern portion of the City connecting West Brant with Highway 403. Only the portion of roadway between Mount Pleasant Street and Erie Avenue was completed by the early 1970s. Twenty years had passed, and the roadway was still largely a dream; a contentious dream. Concerns about the roadway included: ecosystem destruction, Native land claims, and a division of neighbourhoods as the road would cut through the City south of Colborne Street, across the Glebe lands, along the canal then along Greenwich Street, behind the homes along Eagle Avenue to meet up with the West Brant portion at Erie Avenue. These residents felt the need for the expressway was outdated. A need did exist, and still does today, to move traffic efficiently from the Wyndfield development in West Brant to Highway 403 to accommodate the new resident commuters. In 1992, the City commenced efforts to complete the roadway. It was at this time that the road was downsized to a 4-lane roadway from the original limited-access expressway. A provincial government report released in January 1993 called for the project to be put on hold so it could be re-evaluated and Native issues resolved.

A portion of the roadway construction was allowed to proceed, from Colborne Street to Henry Street. This portion opened in July 1996. There was community backlash with the proposed name of the new road, the Wayne Gretzky Parkway. There was an anti-Gretzky sentiment with a minority of residents. This generated negative publicity for the community, but the name ultimately prevailed. The parkway was extended to Dunsdon Street, again not without controversy and a call for more environmental studies. This portion was opened on 9-December-2000. The final northern portion to Powerline Road opened on 15-October-2001.

In 2000, the City accepted $11.5 million and all adjoining land next to the expressway from the provincial government in exchange for a release of any further responsibility by the provincial government to build or maintain the roadway. In November 2000, the agreement with Six Nations elected Band Council to build the BSAR through the Glebe lands expired and the Band Council chose not to extend or renegotiate the agreement. 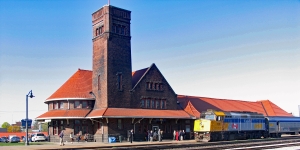 Arrival of the morning commuter train, Train 82, at the Brantford VIA Rail station. (photo by the author)

Work on Highway 403 between Brantford and Ancaster began in the summer of 1990. The volume of traffic carried on Highway 2 between the two centres was heavy and hazardous given all the homes, businesses and farms located along the highway. The City and Chamber of Commerce continued to lobby the provincial government to complete the highway because the highway was vital to the City’s economy and growth. Highway 403 finally opened on 18-August-1997 to great fanfare. A street (highway) party was held on the roadway on 14-August-1997. The highway was finally completed between Woodstock and Hamilton 45 years after it was first conceived. Sound barriers on Highway 403 through the City began to be erected in 1991. The project was completed in 1997.

The Ring Road was renamed Icomm Drive on 5-October-1992.

In 1989, VIA Rail drastically reduced the number of trains travelling through and stopping in Brantford from thirteen to four. GO Transit studied service to Brantford but abandoned the idea because the distance between Aldershot and Brantford was too long with little potential for stops between Brantford and Aldershot due to a lack of population hubs. In 1991, the provincial government paid VIA a subsidy to resume its weekday morning commuter train from London to Toronto. The subsidy was part of a three-year trial. The service became permanent when ridership made the run profitable for VIA.