Interior renovations of the Sanderson Centre to restore the building to its 1919 design, which began in October 1989, continued. When the theatre reopened on 8-September-1990 the Expositor noted that it was the “most thorough restoration job in the history of Brantford.” The cost of the restoration, budgeted at $5.8 million, came in at $6.4 million. Anne Murray was the headline performer on opening night. The restoration work earned the theatre the 1991 Historic Theatre Preservation Award from the League of Historic American Theatres. The Theatre’s diverse entertainment offerings and less than ideal size has contributed to its yearly operating deficit. As a City owned facility, it has a mandate to provide a range of entertainment options even if the market for those offerings is small. Mid-size theatres in North America struggle to cover their operating costs. The City attempted to sell the theatre to private interests in 1993 but no taker could be found. 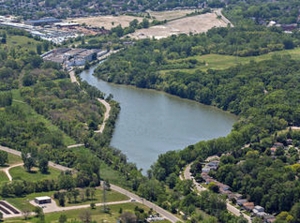 An aerial view of Mohawk Lake.

In 1994, the City received a provincial grant to study the feasibility of a clean up of Mohawk Lake. It was the seventh study conducted of the lake since 1950. The report concluded the lake wasn’t as polluted as once thought. Clean up was estimated at $3.8 million. The City was to receive $6 million from the provincial government to clean up the lake and Mohawk Park. This was part of the compensation package when the Ministry of Government Services office was cancelled. The new Harris government cancelled this funding in 1995. Mohawk Park was made fully accessible in 1994. This improvement was funded by donations from 15 local companies totalling $130,000.

Waterfront Park opened in 1989. Built by private investors it was not able to make a return on its investment and was turned over to the City in 1995 and renamed Earl Haig Family Fun Park. The image also shows the remains of the go-cart track which was decommissioned and removed.

Waterfront Park was built in 1989 by private investors to replace Earl Haig Pool. The water park never did well due to sporadic attendance and rising property taxes. In 1995, the owners of the park agreed to turn over the assets of the park to the City in exchange for a contract to manage the park for ten years. Park profits would be split with the City. In 1996, the management company decided they would no longer manage the park. The City assumed operation of the park and renamed the facility the Earl Haig Family Fun Park. 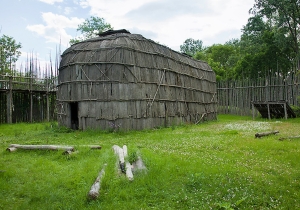 Plans to construct an authentic 17th century Iroquois village as a tourist attraction began in 1996. Kanata Village, built across from the Mohawk Chapel, opened in May of 2000. The site was successfully operated and drew visitors interested in First Nations culture and heritage. The Mohawk Workers group began an occupation of the site in 2007 and attendance declined.

The development of the trail system throughout Brantford began. The Brant Waterways Foundation, the City, the Grand River Conservation Authority, and S.C. Johnson and Son partnered to develop over 40 kilometres of trails. These trails connected to the Brantford to Hamilton trail built on the old Toronto, Hamilton & Buffalo Railway roadbed, and the Brantford to Cambridge trail, built on the Lake Erie & Northern Railway roadbed. Brantford became a trail hub because of these connections to adjacent communities.

Brantford hosted the 1991 Canadian Games for the Physically Disabled. The event attracted over 350 athletes and involved over 350 volunteers. 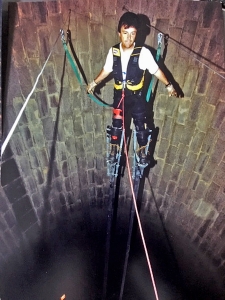 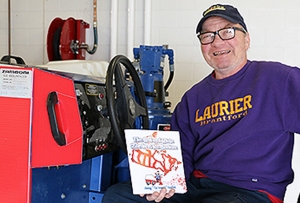 Jimmy “the Iceman” MacNeil, of the Brantford ad District Civic Centre, was voted the most popular Zamboni driver in a contest run by the company to celebrate its 50th anniversary in November-1999. MacNeil beat out “Octopus Al Sobotka, the Zamboni driver at Detroit’s Joe Louis Arena.

The Zamboni Company launched an online contest to select the most popular Zamboni driver to celebrate the company’s 50th anniversary. The contest received more than one million votes and by November 1999, it was a race between two men, Octopus Al Sobotka, the Zamboni driver at Detroit’s Joe Louis Arena, and Jimmy the Iceman MacNeil, the Zamboni driver at the Brantford and District Civic Centre. Sobotka had the support of the Detroit Red Wings and their fans while MacNeil was supported by Walter Gretzky and Brantford residents. MacNeil won the contest. It included an all-expenses paid trip to the 2000 NHL All-Star game, which was held in Toronto that year. MacNeil’s father was a Zamboni repairman. The Zamboni Company opened their Brantford manufacturing facility in 1967.

Professional hockey returned to Brantford in 1991 when the Brantford Smoke began play in the new Colonial Hockey League. This was the City’s first professional hockey team since 1910. The team won the Colonial Cup in the 1992-93 season over the St. Thomas Wildcats. The team was successful on the ice but not at the box office. The team was sold to American owners in 1997 and despite pledging to keep the team in Brantford, they moved the team to Asheville, NC for the 1998-99 season. 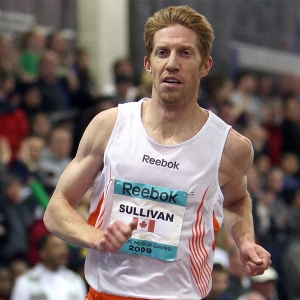 Kevin Sullivan set the world record for the 800 metres at the Ontario junior track and field champion-ships in 1992. In 1993, Sullivan became only the fifth North American high schooler to run the mile in under four minutes.

Kevin Sullivan, a runner, set the world record for the 800 metres at the Ontario junior track and field championships in 1992. In 1993, Sullivan became only the fifth North American high schooler to run the mile in under four minutes. Sullivan won a silver medal at the 1994 Commonwealth Games in Victoria, BC, in the 1,500 metres and represented Canada at the 2000 Olympic Games in Sydney, Australia. Swimmer Julie Howard competed for Canada at the 1992 Olympic Games in Barcelona, Spain, and the 1996 Olympic Games in Atlanta, GA.

The Wayne Gretzky Celebrity Tennis Classic began in 1981. It was a fund-raising event to support the Canadian National Institute for the Blind. The tennis tournament changed to a celebrity softball tournament at the close of the 1980s. The softball tournament ended in 1992. The tournaments raised $1.2 million for the CNIB over its twelve-year run. In 1994, the City held a banquet for Gretzky and his family at the Civic Centre in recognition of Gretzky breaking the NHL record for most goals scored, long held by Gordie Howe. Gretzky retired from the National Hockey League in 1999, after playing for 20 years. Wayne Gretzky holds or shares 61 records listed in the NHL’s Record Book: 40 for the regular season, 15 for the Stanley Cup playoff and six for the All-Star Game.

Rhapsody on Ice, the Brantford-based, female precision skating team folded after their final performance in Denmark in December 1992. In the summer of 1985 Neil Young, Wayne Francis, and Marjorie Black, together with choreographers Scott Kufske, Carol Forrest and Dave Campbell began to build a team to tour the world.

Balancing the hospital budget has been a perpetually trying task. Between December 1990 and June 1991 the Brantford General Hospital closed two wards resulting in the loss of 78 beds because of budget deficits, reducing the bed count to 303 beds. Forty years previous, the hospital had 550 beds. Another budget deficit in 1996 resulted in the loss of 65 beds, 106 full time jobs, and 23 chronic care beds which were moved to St. Joseph’s Hospital. St. Joseph’s also reduced staff from 315 to 285 be-tween 1991 and 1996.

Continuing cuts to hospital funding from the province required a review of the two hospitals and how best to provide cost efficient services. A 1995 report by the Hospital System Planning Task Force recommended closing 81 beds, cutting 100 jobs, and making the Brantford General Hospital the sole provider of acute care and St. Joseph’s the sole provider of chronic care. The recommendation was not received well by St. Joseph’s Hospital as it had just opened four renovated operating rooms, a day surgery and an outpatient area. On 27-November-1997, the Ontario Health Services Restructuring Com-mission ordered St. Joseph’s Hospital to close by April 2000 to become a nursing home. BGH would receive funding to undergo a major renovation. St. Joseph’s looked to partner with McMaster University Faculty of Health and become the county’s chronic, rehabilitative, and palliative care treatment centre but this appeal was rejected by the province. St. Joseph’s closed in June-2001, an extension from the original date in order to give the BGH time to finish their renovations.

The BGH renovations was budgeted at $57 million. An $11 million fund-raising campaign for the hospital was launched. In 1996, an oncology clinic and kidney dialysis centre opened at the BGH. BGH also installed the world’s first X-ray camera that could take multiple images without moving the patient.

In April 2000, the City and County agreed to come together and operate the ambulance service as a County department.