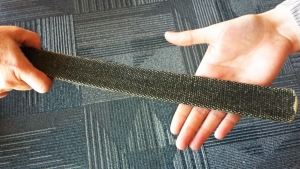 The Strap. Strapping, generally applied to the hand, was a form of corporal punishment, used to discipline children. The strap was made of leather or a rubber belt wrapped in canvas. Strapping was banned in public schools in 1992. The separate school board banned the strap in 1987. The use of the strap in Canadian schools was outlawed by the Supreme Court of Canada in 2004.

In 1990, the Brant County Board of Education made a major investment in technology by installing a keyboard conferencing system, desk-top publishing, and one computer in every classroom. French immersion was under threat as the school board looked to reduce costs by reducing its scope. The introduction of junior kindergarten was contentious because of the money needed to run the programme.

Students with academic challenges in grade school were identified and directed to vocational programmes at Herman Fawcett. Changes made by the Ministry of Education led to destreaming and consequently, Herman Fawcett Secondary School needed to make changes to its programmes in order to accommodate a wider range of students. These changes led to the renaming of the school in 1995 to Tollgate Technological Skills Centre. 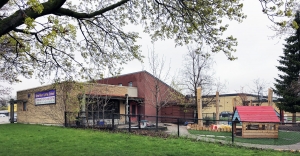 Pauline Johnson Collegiate Child Care Centre. This $450,000 building opened in 1995 replacing a former windowless tech classroom. The centre was built under the direction of its first director, Geke Nolden, to provide a bright, airy environment for the children. The day care accommodates 10 infants, 10 toddlers, and 24 pre-school children. The centre is now known as the Brantford Little School Community Child Care Centre and is open to all children. (photo by the author)

Thomas B. Costain elementary school closed in 1998, after 45 years of service to its neighbourhood. Half-day child care was launched at Pauline Johnson Collegiate in 1988. The programme was expanded and a preschool programme was introduced in 1995 with the opening of a new building next to the high school. A day-care centre for Herman Fawcett Secondary School was rejected by City Council in 1992. These day-care centres were designed to keep teenage mothers in school. The province stepped in to provide funding. The Brant Community Development Agency then agreed to fund and operate the day-care. The day-care continued to operate until the demise of the Brant Community Development Agency. The public school board also initiated the Learning, Earning, and Parenting programme in 1999. This programme allowed teenage mothers on welfare to attend school. The Lansdowne Children’s Centre which provided day-care for over 1,000 disabled children and young adults got a new facility. The centre began in 1952. In 1998, the new facility opened at the former Jane Laycock School on Mount Pleasant Street. It was funded by provincial money and community donations.

Assumption College School opened in 1992 to ease the overcrowding at St John’s College. Brantford’s second Catholic High School since the merger of St John’s and Providence College. An addition was completed in 2007. (photo by the author)

Enrollment at the Catholic School Board continued to increase. 1990 witnessed the largest increase in its history requiring the hiring of 27 teachers and the addition of eight portables. To alleviate overcrowding at the secondary school level, Assumption College School opened in the fall of 1992. St John’s College became the first school in Ontario to hire a police resource officer, Constable Bill Doherty, to create a better rapport between students and the police and to help students understand the role of a police officer in the community. Chief Bob Peeling led this initiative. When Assumption College School opened in 1992 the police resource officer divided their time between the two schools. This programme was expanded to North Park, Pauline Johnson, and Tollgate Tech in September 1990, and to BCI in September 2000. 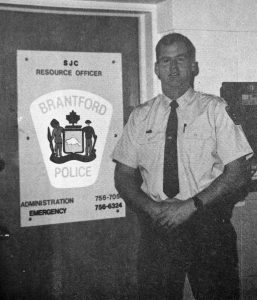 Constable Bill Doherty, high school resource officer. St John’s College became the first school in Ontario to hire a police resource office, to create a better rapport between students and the police and to help students understand the role of a police officer in the community. (photo from the Brantford Police 1990 Annual Report)

Funding cuts to education made by the Bob Rae NDP government in 1993 and further cuts made by the Mike Harris Progressive Conservative government led to teacher unrest. Teachers began to work to rule and withdrew services such as coaching sports teams and after-hours homework help. In 1993, the county’s public high school teachers were the second lowest paid in the province so they launched a two-month work to rule campaign in protest. In 1997, separate school board teachers went on strike, the board’s first ever teacher strike. Later in 1997, teachers from both boards joined a province-wide strike to protest government cutbacks and education policies. In 1998 public secondary school teachers worked to rule for four months while negotiating a new contract. 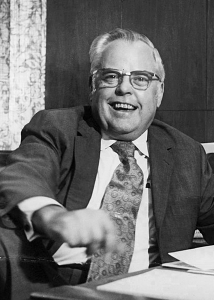 James Hillier, born in Brantford in 1915, was a graduate of Brantford Collegiate Institute and the University of Toronto. Hillier and colleague Albert Prebus built the first North American electron microscope at the University of Toronto in 1938. Hillier rose through the ranks at RCA and when he retired he was the Executive Vice President and Chief Scientist of RCA Labs. Hillier remained involved with the Brantford community and established the James Hillier Foundation in 1993 to award annual scholarships in Brant County students pursuing an education in Science. Hillier is buried in the Farringdon Cemetery.

Dr. James Hillier, the co-inventor of the electron scanning microscope, offered to match locally raised money to establish a scholarship in his name for science students intending to attend university. A $1.2 million scholarship was established in 1996.

Enrollment at Mohawk College was exploding at this time. Enrollment jumped by 20 percent from 1989 to 1990. Desks and classrooms were in short supply; the school implemented a shift system to accommodate the students. The college invested in a campus expansion in the early 1990s that saw the school change from a satellite campus to a full-service campus. Continuing budget constraints affected the number of programmes the campus could offer. In 1996, the school planned to build a third building, but the provincial government implemented a freeze on capital spending. The school then opted to discontinue its nursing programme in Brantford, a programme that was transferred from the Brantford General Hospital in 1973. The College looked to move into the Eaton’s Market Square building or the icomm building as an alternative to expanding its campus. The move had the backing of the provincial government since the College would be leasing the buildings rather than owning them but a move never materialised.

In the 1990s, Brantford was the largest city in the province without a university. A committee of the Brant Community Futures Development Corporation, later known as the Grand Valley Education Society planned to open a private liberal arts university in the city, to be named the University College of the Grand Valley. Coincident with this plan Wilfrid Laurier University was considering Brantford for a satellite campus and approached the Grand Valley Education Society. Laurier was interested in the icomm building, but it had just been sold for a casino. Laurier also expressed interest in establishing a campus in the Victoria Park area. In May 1998, the City offered Laurier the renovated and vacant Carnegie Library building. On 30-June-1998, the City and Laurier agreed to operate a temporary campus in the Carnegie building for a five-year period. In September 1999, 39 students, known as the pioneers, began their studies in the Contemporary Studies programme, a programme unique to the Brantford campus. In 2000, the City gifted the Holstein building to the university for use as a residence.

In 2000, enrollment at Mohawk was up to 725 students, Mohawk’s thirtieth year in Brantford. Laurier had an enrollment of 130 full time students in 2000, its second year of operation in Brantford.

The Public Utilities Commission (P.U.C.) was responsible for Brantford’s water works, electricity distribution, and the buses. It was formed in 1935 by the amalgamation of the Hydro Electric Commission, the Board of Water Commissioners, and the Municipal Railway Commission. As the decade progressed, disagreements and tensions developed between the P.U.C. board and the City over the cost of running a second elected body to manage water, electricity, and the buses. The City hoped to save $1 million a year by eliminating the P.U.C. and taking the services in house, except for electricity, which would be set up as a separate City-owned company, as per provincial regulations. A separate P.U.C. was seen by many critics to be an antiquated form of managing these services. The dismantling of the P.U.C. began in 1996 and was completed on 30-August-1998 when the P.U.C. was dissolved and its elected board was replaced by a City appointed board. 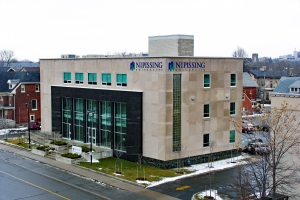 PUC Building. This mid-century modern building opened in 1957. It was the headquarters of the Public Utilities Commission. Built for $395,000 by Hamill Construction of Galt (now Cambridge), Ontario. The building was remodelled and repurposed into classroom and administration space for Nipissing University in 2008. Nipissing closed their Brantford campus in 2018. (photo by the author)

In 1990, a geneticist at the University of Western Ontario (now Western University) in London advised residents not to drink the tap water because the presence of NDMA (N-Nitrosodiamethylamine) made Brantford water unsafe to drink. The main source of the contamination was from the Uniroyal Chemical plant in Elmira. This led civic leaders to question the ability of the PUC to provide clean, dependable water services. In 1996, a new water treatment system was introduced to eliminate the foul taste of the drinking water. This system also reduced the amount of chlorine that needed to be used. The foul taste was not related to the Uniroyal contamination.

Bus ridership continued to decline while losses from operating the service increased. A new bus terminal, smaller air-conditioned buses and various marketing programmes did not stabilise ridership. Consequently, fares increased and service was reduced. In 1995, the provincial government cut transit subsidies to municipalities which increased the losses suffered by the City. In 1999, Brantford Transit introduced dial-a-bus which was North America’s first curb-to-curb bus service. This service operated on weekday and Saturday evenings and all-day Sunday in place of a fixed bus route. A customer would be picked up at their door within 45 minutes of calling for a bus. The service was so successful that additional buses were added but rising losses forced the service to be cut back. It was reduced to two fixed routes and four on-demand buses. The P.U.C. operated the city transit service from 1935 until March 1997 when the municipality took over. Bus service between Brantford and Paris operated by the P.U.C. ended on 21-June-1996. Private operator About Town Transportation provided service between the two centres from 1996 until 2004.