Police Chief Al Barber succeeded John Weir in 1987. Barber retired in 1998 and was succeeded by Bob Peeling. Barber led a significant change in the force’s approach to policing. Barber wanted closer ties between the department and the public. Community policing was implemented where the same police officers were stationed in particular areas of the city so they would become a familiar presence in their assigned neighbourhoods. First the downtown was addressed, then the north end. In 1992, the concept was rolled out city wide. In 1994, the police service announced an effort to include more women, Aboriginals, minorities, and the disabled to its ranks. 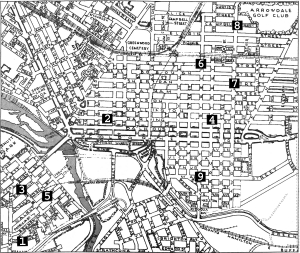 Crime rate statistics from 1999 showed the crime rate fell by fifty percent since 1983. However, drug offences, youth crime, use of weapons, and crimes of violence were increasing. Eleven murders and 541 robberies were committed in the City in the 1990s.

On 3-March-1992, it was discovered that two machine guns, 64 C7 rifles, and 9 Browning 9mm semi-automatic pistols were stolen from the Armoury, the largest robbery of an armoury still to this day. A man was charged and most of the weapons were recovered. The machine guns were WWII vintage and had no firing pins, 45 rifles had missing bolts and the 9mm pistols did not have barrels. The bolts and the barrels were stored separately. No ammunition was taken. It turned out that the burglar alarm at the armoury was not connected to the new police station, it remained connected to the old empty police station, so the police were not aware that the alarm was triggered when the robbery occurred.

The police had to deal with the shaving cream attacker, a man who would sneak up on women and smear their face and hair with shaving cream. After nine months the attacker was caught; the attacker apparently suffered from impulse control disorder.

Michael Lovejoy of Flint, MI, driving for RTS Transport, was found shot to death in the sleeping compartment of his rig on Saturday afternoon 9-April-1994. Lovejoy parked his rig on the shoulder of Highway 403 on Friday afternoon 8-April. His parked rig was noticed by a fellow RTS Transport driver who passed it twice on Saturday on his way to and from Buffalo. The driver stopped to investigate and found Lovejoy dead. The circumstances surrounding Lovejoy’s death remain a mystery. His murder was never solved. (from the archives at the Brantford Public Library, photo by Brian Thompson, Brantford Expositor)

On 9-April-1994, an American trucker, Michael Lovejoy, was found shot to death in the sleeping compartment of his cab which was parked on the shoulder of Highway 403 between Garden Avenue and the Wayne Gretzky Parkway. Lovejoy parked his rig on Friday afternoon 8-April and set his alarm to wake himself up at 5:30 pm. Another tractor-trailer was seen parked behind Lovejoy’s rig on Friday afternoon. Despite continent wide publicity and flyers distributed to all truck stops between Flint, MI, and Buffalo NY, along the Highway 402/403/QEW corrridor, no leads were uncovered. This crime remains unsolved. 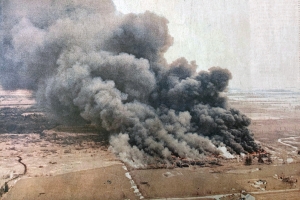 The Hagersville Tire Fire started on Monday 12-February-1990. 14 million tires were stored on a 14-acre site operated by Tyre King Tyre Recycling, and owned by Ed Straza. The fire was fought by volunteer firefighters from 10 municipalities. High winds and poor weather hampered their efforts, grounding water bombers for days. Freezing rain produced extremely hot steam and fog. The fire took 17 days to put out. A gang of five area boys were found responsible for setting the fire. (from the archives at the Brantford Public Library)

The courthouse at Wellington Square was too small and crowded to accommodate all the cases brought before the court. There was also an insufficient number of judges to hear the cases and make timely judgments. In 1992, an extra half of a judge of time was added. In January 1993, the province requested proposals to find a new facility to accommodate all court facilities under one roof in downtown Brantford. The company that was awarded the tender withdrew their bid citing it was not economically viable to proceed. The project was retendered but the courthouse size was reduced by forty percent leaving it with no more space than the current facility. The City and police objected but the province moved forward undeterred. A new courthouse was constructed next to the family court building on Darling Street. It opened in 1996.

A new fire department headquarters was opened on 29-May-2000 at Clarence and Wellington Streets. No tears were shed when firefighters moved out of their problem plagued 1950s headquarters building on Greenwich Street.

The fire department was kept busy during the decade. Brant Dairy moved from Dalhousie and Stanley Streets to Elgin Street in 1992. On 7-August-1992, their vacant building was set ablaze. The old Massey-Ferguson foundry on Greenwich Street was set on fire on 7-November-1992 by two boys aged 13 and 14. The downtown building at 53 / 55 Colborne Street was set ablaze on 1-August-1993. The building was owned by Stephen Kun and housed the Appliance Repair Centre which was operated by John Bragg for 17 years. The building was repaired and the fourth floor was removed. The C.J. Mulholland Mattress Factory at 363 Colborne Street burned on 25-September-1994. The fire was thought to be deliberately set. Pauwel’s Travel, 95 Dalhousie Street experienced a second storey fire on Tuesday morning 11-October-1994. 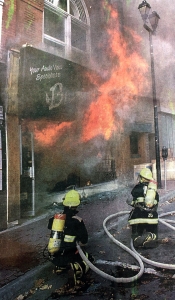 Brant Stereo fire 3-November-1994. The fire started in the store basement. The building was built in 1880. Brant Stereo had been operating from this location since 1979 and is still in business at this location. (from the archives at the Brantford Public Library)

A fire started in the basement of Brant Stereo, 44 Market Street on Thursday morning 3-November-1994, gutting the store. The store building was built in 1880. Brant Stereo has been located there since 1979. $3.5 million of inventory, just received for Christmas was lost. Moffat Lunch and the Odeon Theatre both received smoke and water damaged.

Fire damage in 1995 was the heaviest it had been in a decade. Hill & Robinson Funeral Home, 30 Nelson Street at Queen Street, suffered a fire on 12-April-1995. The storage barns at Cashway Lumber on Park Road North burned on Sunday 14-May-1995. The empty Bay State Abrasives building at McMurray and Pearl Streets was set on fire on 6-September-1995. Five people died in a house fire at 261/2 West Street on 24-September-1995. Four children and their mother perished. The fire was set by one of the children. A fire started in the rear of Maich Appliances, 61 Colborne Street, on 20-October-1995. The Solaray factory in Holmedale was gutted by an arsonist on 30-October-1995. A fire at Lee-way Plumbing Supplies on Colborne street east of Murray Street on 23-December-1995 destroyed the building along with two other businesses, Copyd, and the Ontario Public School Teachers’ Federation office. This building was located across the street from St. Mary’s Church.

On 4-January-1996, a fire was set at the former House of Hagen Bakery & Delicatessen, 131 Colborne Street, downtown. On 10-January-1996 a fire was started in the Twin Eagle Variety Store located in the Temple Building on Dalhousie Street next to the former Federal Building. The fire quickly spread to the second and third floor apartments over the store but was contained by firefighters. 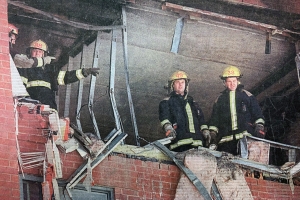 Damage from an explosion at the 6-storey Slovak Village apartment building on 5th Avenue on 9-March-1996. Unit 413 was doused in gasoline and ignited. Six units were destroyed in the blast. Richard Teichmann, of Dundas, was sentenced to 22 months in jail for setting the blast. Douglas Swift, the unit’s former tenant, was charged with conspiracy to commit arson. Swift was angry by his eviction from his unit a few months earlier. The blast caused $1.5 million damage to the apartment building and took 16 months to repair. (from the archives at the Brantford Public Library, photo by Wayne Roper, Brantford Expositor)

On Saturday 9-March-1996 an explosion destroyed a fourth floor apartment at the 6-storey Slovak Village on 5th Avenue, blowing out the wall of the apartment unit. A former tenant, Douglas Swift, angry for being evicted from the apartment building, arranged for Richard Teichmann, of Dundas, to torch the unit. Teichmann soaked the unit in gasoline and lit a match. He was blown out of the unit 300 feet away into a field. The blast caused $1.5 million damage to the apartment building and took 16 months to repair.

On 20-December-1996 a fire was started in the lost and found bin at St. Theresa School on Dalewood Drive. The fire occurred on the last day of school before the Christmas break. 350 students had to be evacuated.

A tire fire broke out at Otterwood Tire Recycling and Storage on 2-December-1997. The facility was located in the old Sternson Factory on Mohawk Street. The site contained 40,000 tires. 7,000 tires burned. Arson was the cause. The abandoned Northern Globe roofing factory on Pearl Street was twice set ablaze by arsonists; in 1997 and 1999.

A fire at Searle Manufacturing, 122 Copernicus Crescent on Monday 19-April-1999 marked the Fire Department’s first use of their heat sensing camera to locate hot spots and fight the fire.