In 1997, Council appointed a Big On Brant committee to develop and implement a strategic plan for the City and the surrounding area to combat Brantford’s image problem of a struggling city of closed factories requiring government handouts. In 1999, the City hired a consulting firm to rebrand the City and give it a more distinct civic identity. The logo proposed by the consultants was criticised as being unreadable and meaningless. The City organised a contest to create a new image for the City; a new logo. Michael Swanson, a local artist, won the contest and $5,000 in prize money. His logo is still in use today. 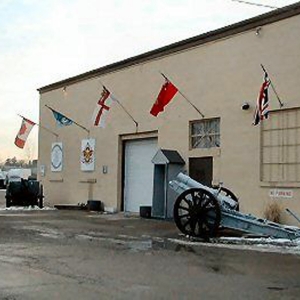 The Canadian Military Heritage Museum on Greenwich Street opened in 1993 by a group of veterans and military enthusiasts. The museum featured exhibits of wartime weapons, equipment, and memorabilia. The museum covers the military heritage of the United Empire Loyalists of the 1700s to the peacekeepers of today. (photo from Pinterest)

Citizens and business owners were dissatisfied with the services being delivered by the City. A 1995 Mayor’s task force report concluded that City Hall was dictatorial, slow to respond, and weak on follow up. A 1998 report sponsored by the federal government concurred, citing negative attitudes, weak marketing, too much red tape, and poor decision-making and coordination.

The recession of the early 1990s created challenges for City Council. Taxes rose by over eight percent in both 1990 and 1991. In 1992, City Council sought a zero-budget increase. Budgets were slashed and all services reviewed. For the first time in thirty years there was no property tax increase. Provincial downloading instituted by the provincial government of Mike Harris in 1996 put further strains on the budget but City Council managed to avoid increasing property taxes until 1998. Provincial downloading is when the provincial government transfers the cost of providing some programmes from the province, and the provincial treasury, to local governments and thus their taxpayers. The cost of these programmes delivered locally is borne solely by the municipal (local) taxpayer.

Even though merger talks between the City and the County did not materialise, the City and County agreed to a shared services agreement in 1998 for the following services: John Noble Home, ambulance, 911, child care, social housing, and the Brant County Health Unit. 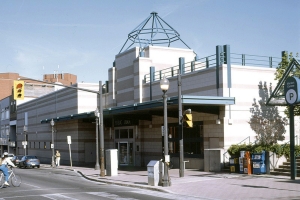 The downtown Woolco store was purchased by the City and converted into the Public Library, replacing the Carnegie Building on George Street. The new library opened in January-1992. The building was designed by Moffat Kinoshita Associates of Toronto. The design was runner up to the new Hockey Hall of Fame in Toronto in the third annual Design Efficiency Awards and won an award of excellence from the Hamilton Society of Architects. (photos courtesy of the Brant Historical Society)

In January-1992, the new downtown library was opened. The library was located in the former Woolco store on Colborne and Market Streets. The new Library came in over budget by a large amount. City Council was now faced with the question of what to do with the old Carnegie Library building. Suggestions included converting it to a courthouse, an art gallery, and municipal offices. The building was offered to the Brant Historical Society but the $1.8 million price tag was too high for the Society and the proposal was rejected. The building was mothballed. 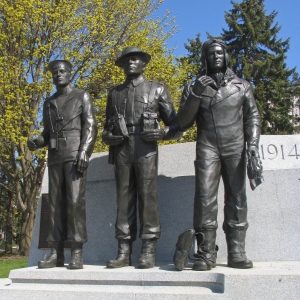 The Brant County War Memorial was finally completed when seven statues were unveiled on 12-September-1992. The statues represent the men and women who fought in the Army, Navy, and Air Force. The additional female statue represents the Medical Corp. (photo by the author)

The Brant County War Memorial was finally complete when seven new statues were unveiled on 12-September-1992. The Brant County War Memorial Committee raised $350,000 to finish the memorial. The memorial was designed by Walter S. Allward and constructed in 1933. The memorial did not include a group of statues representing Humanity because of financial constraints. Allward’s statues were of a wounded youth, a resolute mother, a figure praying, and a piece of crippled field artillery. Allward designed the Bell Memorial on West Street and the Vimy Ridge Memorial in France. On 2-July-1954, a memorial gallery designed by local architect Charles Brooks was unveiled commemorating those who perished in the Second World War. The Canadian Military Heritage Museum on Greenwich Street opened in 1993 by a group of veterans and military enthusiasts. The museum featured exhibits of wartime weapons, equipment, and memorabilia. The museum covers the military heritage of the United Empire Loyalists of the 1700s to the peacekeepers of today. 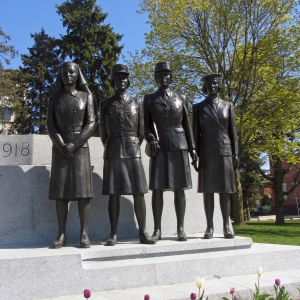 The Brant County War Memorial was finally completed when seven statues were unveiled on 12-September-1992. The statues represent the men and women who fought in the Army, Navy, and Air Force. The additional female statue represents the Medical Corp. (photo by the author)

A 1988 survey indicated that thirty percent of Brantford’s residents smoked tobacco products; the highest rate in Canada. In 1998, the City tried to limit smoking in public places but was met with opposition from local businesses and the Chamber of Commerce, fearing a loss of business. A by-law to ban smoking in public places including bingo halls, bowling alleys, and restaurants was finally enacted in 2003.

The chip wagons, a downtown Brantford institution, came under attack in 1997 when downtown restaurants objected to the chips wagons as unfair competition. The matter was resolved when the wagons were charged an annual licence fee. 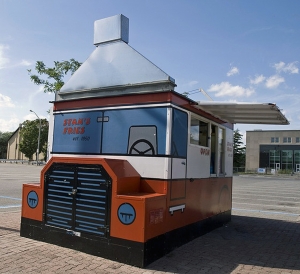 Stan’s Fries on Darling Street behind the Canada Trust building, before the Transit Terminal was built. (photo from Pinterest)

In November 1992, the first telephone factory building in Canada on Wharf Street was demolished. The factory was started by James Cowherd in 1879 and operated until Cowherd’s death in 1881. This occurred even though the building once had a plaque on it noting its significance. This demolition resulted in the City compiling an inventory of heritage buildings.

Queen Elizabeth II visited Brantford in 1997 to unveil a plaque which officially designated the Bell Homestead as a National Historic Site. In 1953, a cairn and plaque placed at the Bell Homestead only commemorated the invention of the telephone and did not designate the site. 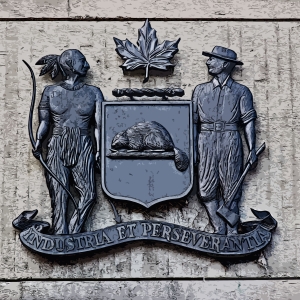 Brantford adopted its corporate seal in 1850. In 1977, it registered its first coat of arms which was presented to the City by the Zonta Club. The coat of arms was based on the 1850 corporate seal with some modifications. In 1989, the Kiwanis Club helped the City petition the Canadian Heraldic Authority for a grant of arms. The arms were officially granted on 6-March-1991. In April 1991, the City requested that a new flag be presented with the new arms. On 24-September-1991, Governor-General Ray Hnatyshyn presented Brantford’s new coat of arms and flag.

The City launched their blue-box recycling programme in November 1989. The programme was an overwhelming success as two tons more per day was being collected than expected. 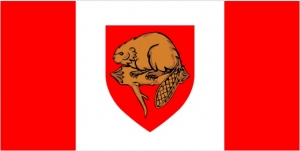 Environmental contamination became a growing concern for the City at brownfield sites and decaying factories. As factory buildings grew older and Ontario started shifting away from its industrial economy, company owners found it cheaper to walk away from their contaminated factories rather than clean up the environmental damage.

Northern Globe on Pearl and Sydenham Streets in the North Ward was a particularly dirty site the City ultimately paid to clean up. The site manufactured roofing products since 1906, first as the Brantford Roofing Company and then Domtar when the Montreal company bought the facility in 1954. Globe Building Materials bought the plant in 1991 and renamed it Northern Globe. They closed the facility in November 1995 when Northern Globe went bankrupt. Fires in 1997, 1999, and 2001 destroyed the buildings on the property. The City took over this property in 2004. It was remediated and a soil cap was installed in 2016.

Brantford launched a brownfield programme to monitor 16 former factory sites. Brantford was an early adopter of this brownfield approach. Issues surrounding liability, ownership of the properties, and funding hampered efforts to begin remediation efforts. The Greenwich-Mohawk properties which once housed the Sternson, Cockshutt, and Massey-Ferguson factories were the first sites targeted. Remediation of these properties was only completed at the end of 2017.