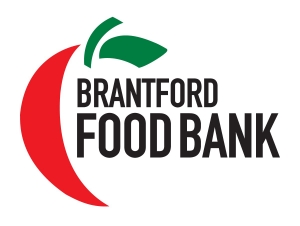 Brantford Foodbank began in the late 1980s because of the economic hardship that hit the city. It was originally called the Brantford Unemployed Help Centre. In addition to helping families and individuals in Brantford, Brant County, and Six Nations they provide a food distribution service to 26 other food and meal providers in the community. It is located at 1100 Clarence Street South.

The North American economy was plunged into a recession in the early 1990s. Some of the reasons cited were: the end of the Cold War leading to a decrease in military spending; restrictive central bank monetary policies in response to rising inflation; the rise in oil prices from $17 per barrel in July-1990 to $36 per barrel in October-1990 because of the Persian Gulf War; Iraq’s invasion of Kuwait; and a decline in real estate development because of overbuilding during the 1980s.

Brantford was hit hard during this recession. By February-1991, over 7,000 people in the City and County were collecting unemployment insurance, an increase of almost 2,200 people from the year before; this was the highest level in seven years. People on welfare reached 2,570, an all-time high; more than 1,200 higher than the year before. Foodbank usage soared, causing the food bank to use some of their reserve funds. At the end of 1991, over 20,000 people had used the Foodbank, almost double from the number in 1990. The line-ups at the Blessing Centre soup kitchen got longer as the year progressed, the United Way did not reach its fund-raising goal, the number of people filing for bankruptcy increased substantially, and unpaid taxes were at their highest level ever.

1992 was even worse than 1991. 27,500 used the Foodbank. The recession put tremendous pressure on Social Services requiring considerably more funding than the previous year. The demand for afford-able housing was at crisis proportions with over 850 people on the Housing Authority’s waiting list in 1993. Brantford was much worse off than other communities in southern Ontario. The hard times in Brantford made the front page of the New York Times on 3-October-1993. The writer blamed the free trade agreement with the United States which resulted in the City undergoing a transition similar to what other manufacturing centres were experiencing. Manufacturers found that they no longer needed a plant in Canada if American products could move across the border duty free.

The local economy began to improve in 1993. The unemployment rate in November-1993 was 10.7 percent, down from 14.7 percent in March-1993. The economy gradually improved throughout the 1990s. It is interesting to note that in September-1999 The Manpower Employment Outlook, an international magazine, rated Brantford last for employment prospects in a list of 44 cities, yet three month later Brantford was noted as one of the most promising job markets in Canada. It can make one question just how credible are these lists?

Trailmobile began in Paris in 1863 as Adams & Son, and later the Adams Wagon Company. It moved to Brantford in 1900. Cockshutt acquired the business in 1911 and was renamed Brantford Coach and Body. In 1960 a new plant opened the Cainsville industrial park. Trailmobile Canada acquired the company in 1968. The plant closed on July-1990. (photo by the author) 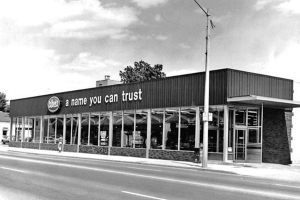 Reg Calbeck opened his first store on Colborne Street West in 1921; first as a bakeshop but soon thereafter changed it to a grocery store. Calbeck’s began to expand in 1956 under the leadership of Arthur (Reg’s son) and Jack Calbeck (Arthur’s son). Calbeck’s grew to seven stores – three in Brantford, and one each in Paris, Waterford, Simcoe, and Port Dover. Calbeck’s was sold to Sobey’s in 1990. (photo courtesy of the Brant Historical Society)

In 1990, Calbeck’s was sold to Sobey’s. Calbeck’s was Ontario’s largest family-owned grocery-store chain at the time; it had seven stores. Agnew-Surpass moved to London in 1992 and went bankrupt in 2000; it started in Brantford in 1879 as Agnew Shoes and merged with Surpass stores in 1928. Brant Dairy, which started in 1921, was sold in 1995 to Agropur of Québec. Brant Dairy, continued to operate on Elgin Street.

Keeprite began operations in Branford in 1945. In 1983, Keeprite was the largest manufacturer of air conditioners in Canada. The company was acquired by Inter-City Gas Ltd. Because of restructuring Inter-City moved production from their Illinois plant to Brantford in 1991. Rather than doubling employment at the plant as the company had expected, a weakening of the market saw the plant lay-off workers. In January-1994, the Brantford plant closed costing 765 workers their jobs. 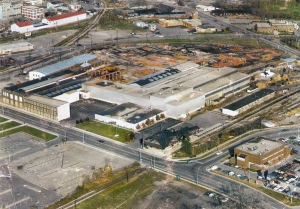 Timberjack began in 1844 when Phillip VanBrockling opened Brantford Engine Works. The company was renamed C.H. Waterous and Company in 1864 and then Waterous Engine Works in 1874. It was acquired by the Koehring Company in 1953. Timber jack acquired the company in 1988. It closed down in October-1992, the oldest Canadian company in continuous operation when it closed, 148 years. (photo from Pinterest)

American Healthcare Manufacturing, formerly Texpack, went into receivership in March of 1992. A buyer was found and the union agreed to a new contract but the Ontario Development Corporation, who held loans on the company, didn’t believe the plant was viable causing the buyer to walk away from the purchase after objecting to the conditions set by the ODC. 190 people lost their jobs.

Harding Carpets died a slow, agonising death over eight years. A failed joint venture with a Tennessee company in 1990 almost led to the end of the company, but the Ontario Development Corporation provided loans and loan guarantees to keep it afloat. Sales increased fifty percent between 1991 and 1993. In 1994, National FibreTech bought the company. By 1997, the company was overextended and declared bankruptcy. The plant closed in May-1997. The employees tried to buy the plant and reopen it financing the purchase using money owed to the workers by the company in unpaid benefits. This proposal would result in the unemployed workers having their unemployment benefits clawed back, so the plan was abandoned. Another group surfaced in 1998 with a plan to begin production in April but their financing never materialised. The plant closed for good in August-1998 and the production equipment was auctioned off. 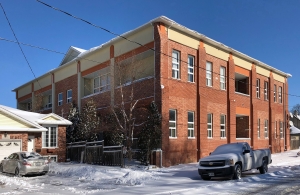 Barber-Ellis moved to Brantford from Toronto on 1904. The factory was located on Marlborough Street at Park Street. The company manufactured envelopes, printing papers, and stationery. The company moved to Plant Farm Road in 1990. Now known as Innova Envelope it closed in August-1996. The original factory site was partially demolished and converted into condominiums by Multani Customs Homes. (photo by the author)

Gates Rubber, the City’s largest employer in 1990, expanded their operations in 1990, and again in 1992 and 1994. A slowdown in the U.S. automotive market resulted in lay-offs in 1995 and 1996. In 1999, the company closed its Iroquois Street manufacturing factory. The company still operated a facility on Henry Street.

On the good news front, the City attracted 17 new companies to town in 1990. By the end of 1994, all the space at the former Massey-Ferguson North American combine plant was occupied. This complex was renamed the Brant Trade and Industrial Park. SC Johnson and Son saw a significant increase in sales by giving the Brantford plant a North American mandate for certain products, taking advantage of the Canada-U.S. Free Trade Agreement. This resulted in a near doubling of production staff by 1994. 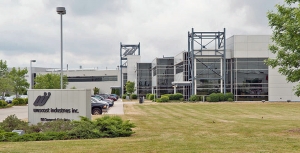 The City was able to attract auto parts manufacturers. Standard Tube of Canada and Utilase Blank Welding Technologies arrived in 1997. In 2000, Meridian Automotive Systems announced their intention to move to Brantford and Wescast Industries announced it was building a technical centre and head office in the new Northwest Industrial Park.

By 1999, the unemployment rate was down to 5.8 percent. The National Post Business Magazine rated Wescast Industries, Eagle Precision Tools, and Nu-Gro among the best business performers in the country. None of these companies have manufacturing facilities in Brantford any longer. 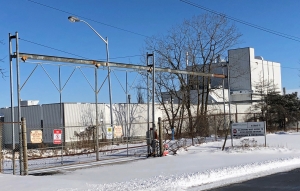 This building located on Craig Street and Morton Avenue East was the site of BASF and later Nu-Gro. The site is rumoured to be the preferred location for a Costco store in Brantford. (photo by the author)

In 1991, the City purchased 200 acres to create the Northwest Industrial Park, at Oak Park and Hardy Roads. More land for industrial development and expansion was needed by the City. The idea was to service the land with sewer and water connections through West Brant and along the river bed of the Grand River, upstream from the water intake for the City’s water supply. In 1994, environmentalists and members of the Six Nations set up camp on an island in the Grand River to stop the construction of the sewer and water line. The river bed is First Nations territory and the sewer line risked contaminating the water supply downstream should it fail. In 1997, the City and Six Nations reached an agreement whereby the City would bury the lines 10 to 15 feet below the river bed. The drilling method the City planned to use failed because the bedrock was too hard for the drill. In 1998, the City built a pedestrian bridge across the river. This bridge would carry the water and sewer lines above the river to the new industrial park. The project was completed in March-2000.