My final column about Brantford in the 1980s. Two new subdivisions featuring executive style homes were laid out, the North Park Sports Complex was renamed the Wayne Gretzky Sports Centre, the Olympic Torch Relay passed through the City on Christmas day in 1987, Prime Minister Joe Clark confirms Canada’s role in the freeing of six Americans from Iran while on an election stop at CKPC, and Lynden Park Malls undergoes a major expansion. 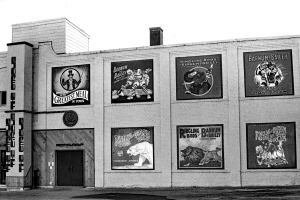 The Circus – Popular for a time in the 1980s, this restaurant was located at 175 Dalhousie Street. The building was demolished in 1994. Phoenix Place Apartments now occupies this site. (image courtesy of the Brant Historical Society)

All types of housing were in demand in the 1980s, but there was a shortage in some categories. The Ava Golf course was turned into a subdivision of executive style homes. The old St. John’s College campus on Dufferin Avenue was converted into row type condominium housing. Plans to renovate the Penman’s factory on Grand River Avenue to, first a hotel, and then apartment style condominiums were not successful. The building later burned down. Plans to develop the Massey complex on Greenwich Street into a mixed development including housing, commercial and light industries also did not materialise.

Low rental and geared-to-income housing continued to be in short supply. To address this need, the City created a not-for-profit corporation to develop and operate housing projects. The situation grew so dire that some people were forced to live in parks and motels. Some families had to put their children into foster homes because they were unable to find suitable accommodations. Bylaws were also created to regulate the size and location of group homes to ensure they were not concentrated into a few neighbourhoods.

The Brantford Bisons Junior football team disbanded in 1982. Declining fan support and player interest led to the team’s demise. The Bison Alumni however still remain a force in the City, supporting minor sports of all kinds and at all age levels. In 1984, the Brantford Alexanders Major Junior A hockey team left the City for Hamilton. Fan interest waned even though the on-ice product was competitive. The team had reported losses of $100,000 per season for several years. During the 1984 and 1985 hockey season, the Flamboro Mott’s Clamatos Senior A team played part of their season at the Civic Centre. In 1986, the team moved its entire operation to Brantford. Known as the Brantford Mott’s Clamatos, the team won the Allan Cup that season, Brantford’s second Allan Cup in ten years. 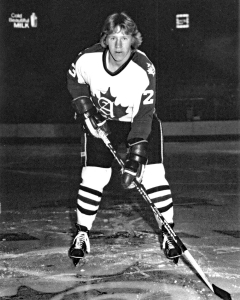 Kevin Sullivan first gained international attention for his middle-distance running. In 1988, at age 14, Sullivan ran the 800 metres faster than any 14-year-old had even run that distance in competition. He continued to break records in 800 metre and 1,500 metre races.

The City renamed the North Park Sports Complex to the Wayne Gretzky Sports Centre in July-1982 in recognition of Gretzky’s accomplishments in the NHL. The City’s first choice was to rename the Civic Centre after Gretzky, but the Brantford and District Labour Council objected as they had been largely responsible for the building of the Civic Centre. In 1984, a Toronto art gallery proposed to place a 14-foot statue of Gretzky at the complex but the family objected to the gallery’s fund raising methods and blocked the project. 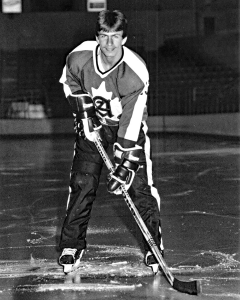 Keith Gretzky played for the Brantford Alexanders in 1982-1983 season. Gretzky was drafted in the third round, 56th overall, in the 1985 NHL entry draft by the Buffalo Sabres. Gretzky never played a regular season game in the NHL. He is currently the Assistant General Manager of the Edmonton Oilers. (image courtesy of the Brant Historical Society)

In 1981, Gretzky established an annual invitational tennis tournament in the city. The event evolved after a few years to a slow-pitch baseball tournament. The tournaments featured sports and entertainment celebrities. All profits from the tournaments went to the Canadian National Institute for the Blind.

The Brantford and Area Sports Hall of Recognition opened in 1985 to recognise nationally and internationally successful athletes from the area. The Hall opened honouring the achievements of 41 athletes.
On Christmas Day in 1987, the Petro-Canada Olympic Torch Relay passed through Brantford on its way to Calgary for the 1988 Winter Olympics.

Ben Johnson, the disgraced sprinter of the 1988 Summer Olympics was appointed parade marshal of the City’s 1989 Canada Day parade. Johnson was warmly received by the crowd. Johnson’s invitation to attend the 1989 Wayne Gretzky slow-pitch tournament was withdrawn because sponsors threatened to pull out of the event if he participated.

CKPC and the Canadian Caper

After the U.S.-backed Shah of Iran’s regime fell during the Islamic Iranian Revolution, Islamist students and militants seized the U.S. embassy and all embassy personnel in Tehran on 4-November-1979. Six Americans managed to escape and after six days were given sanctuary at the residences of Canadian Ambassador Ken Taylor and his wife Patricia and Immigration Officer John Sheardown and his wife Zena. A plan was hatched by Taylor with the support of Prime Minister Joe Clark and Secretary of State for External Affairs Flora MacDonald to smuggle the Americans out of Iran with the assistance of the U.S. Central Intelligence Agency. An Order in Council was made to issue the Americans Canadian passports with fake identities. As time passed Taylor feared the Americans’ concealment may have been discovered by the Iranians so plans were accelerated to get the Americans out of Iran. By this time Taylor had reduced embassy personnel to a skeleton crew. The Americans left Iran with Canadian passports on Sunday 27-January-1980. The story was broken by La Presse reporter Jean Pelliter on Monday 28-January in Montreal. The Canadian embassy was quietly closed on Monday and Taylor and the remaining staff returned to Canada.

During an election tour through southern Ontario on Tuesday 29-January-1980 Joe Clark was in Brantford, appearing on the CKPC programme “Off the Cuff,” hosted by John Best. It was at CKPC, in front of television cameras, with the CKPC logo featured prominently behind Clark, that Clark revealed Canada’s role in helping the American hostages escape Iran. 52 Americans remained in captivity until 20-January-1981, after 444 days, when they were released, the day Ronald Reagan assumed the presidency from Jimmy Carter. Joe Clark went on to lose the 1980 federal election on 18-February-1980, that saw Pierre Trudeau returned to office. 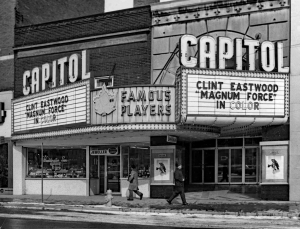 Capitol Theatre – Designed by famous theatre architect Thomas Lamb of New York. The theatre opened on 22-December-1919 as the Temple Theatre in recognition of the adjoining Temple Building. Purchased by Famous Players in 1929, it was one of the first theatres in Ontario wired for sound. It was renamed the Capitol Theatre in 1931. The last film was screened on Friday 22-August-1986. The theatre was renamed the Sanderson Centre for the Performing Arts on 11-December-1989. The theatre seats 1,133. (image courtesy of the Brant Historical Society)

C. Mady Leaseholds of Windsor began development of a plaza on King George and Kent Roads in August-1984. The 60,000 square foot plaza sported a 40,000 square foot A & P supermarket. The A & P opened in May-1985. A & P closed their two 1950s era supermarkets in Brantford in 1976. One was located at Dalhousie and Stanley Streets, now a McDonalds, and the other at King George Road and Queensway Drive. The A & P is now a Food Basics, a banner owned by Metro. Metro acquired A & P in 2005 and rebranded the stores to Metro on 2009. Food Basics has operated since 1999. A & P opened its first stores in Canada in 1927.

On 4-August-1986 a major expansion to Lynden Park Mall opened. The expansion increased the number of stores at the mall from 55 to 100. The expansion opened almost 12 years to the day the mall first opened on 1-August-1974. The expansion created a circular traffic pattern to the mall and added a food court. At the time of expansion Kmart, Sears, and Miracle Food Mart were the major anchor tenants of the mall. The addition included Marks & Spencer, A & W, Manchu Wok, MMMarvellous MMMuffins, Atlantic Video and Sound, Living Lighting, Micro Cook Centre, St. Clair Paint and Wallpaper, J.H. Young and Sons, Bijou, Boutique Marie Claire, L.A. Express, Foot Locker, Tip Top Tailors, Mister Minit, Aggies, Ashton Shoes, The Coffee Bean, The It Store, Sunrise Records and Tapes, Le Chateau, Pantorama, and Thrifty’s, among many others. There are a lot of memories shopping at these various stores, most no longer around. The mall had plans to expand their retail space and add office space when the demand arose. These additions were never built.

Next month I begin a review of Brantford in the 1990s.