During the 1980s the two hospitals began to rationalise services. The number of chronic-care beds were reduced putting a strain on the hospitals. King Edward School and Cainsville School closed and Mohawk College expanded their programming in the City. Earl Haig pool closed. The Brantford Highland Games came to an end but Riverfest began.

The Willet Hospital in Paris when it was still a stand alone hospital, before it became part of the Brant Community Healthcare System, and before the building was expanded with an addition built in front of the building. (photo courtesy of the Brant Historical Society)

In 1979, the provincial government introduced the concept of rationalisation in health care. The idea was to be more efficient with health spending by making hospitals work together to specialise in the services they offered; to eliminate duplication. In 1980, the Brant District Health Council accepted a plan where the Brantford General Hospital would have the only emergency department. St. Joseph’s would continue as an active treatment hospital, open a day hospital and increase their number of chronic care beds. The Brantford General Hospital would lose over half of their chronic care beds. The Willet Hospital in Paris would become solely a chronic care hospital. The Brantwood Residential Development Centre would become a centre for children with multiple challenges, losing their chronic care beds.

The John Noble Home, a long-term care facility where 350 people resided, was in poor condition. The roof leaked, and the boiler was irreparable. $9 million would be needed to bring the facility up to first class standards. This situation exacerbated the chronic care bed shortage because this residence was supposed to alleviate the need for long-term beds at the hospitals. The City considered selling the home to the private sector but relented and decided to upgrade the facility. Upgrades occurred slowly. By 1989, the cost had escalated to $12.4 million.

Health care programming, however, was advancing. A birth control centre opened in 1982. A new emergency and radiology department opened at the Brantford General Hospital in 1984. A CT scanner became operational in 1989.

Education
In 1979, it was proposed that the public-school board, separate school board, and the City’s Parks Board work together to build a combined school and recreation complex in the Brantwood Park neighbourhood. Negotiations to proceed moved slowly. In 1987, ground was broken on the complex. This initiative was the first of its kind for Ontario. Never before had two school boards and a city worked together to jointly develop a facility. Branlyn Community School, Notre Dame Separate School, and a community centre opened in the fall of 1988. David Peterson, the Premier of Ontario, attended the opening. 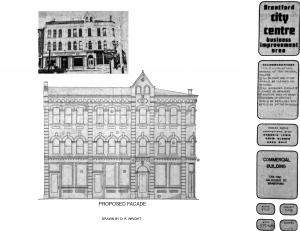 Plans for the renovation of the Commercial Building in 1985. The Commercial Building was designed by Brantford architect John Turner and was built in 1881. John Turner designed the Brant County Courthouse among many other buildings in the area. After the renovations the property was renamed Royal Victoria Place. This outside of this building is used from time-to-time by the TV series Murdoch Mysteries. (image courtesy of the Brant Historical Society)

Central School, the City’s oldest school, was in poor condition. The school opened in 1891. The school board wanted to demolish the school and build a new one. Heritage advocates wanted the school designated and renovated. A fire on 10-March-1982 that seriously damaged the school looked like it would end the matter, but the heritage advocates continued their fight for designation and obtained an injunction against the demolition. The City turned down the request to designate the school and the school was razed. The new and smaller Central School opened in October-1983. During excavations for the new school, 28 graves were unearthed. The school’s site was designated as a burial ground in the original 1830 survey of Brantford.

Full public funding for Separate schools (Catholic schools) was implemented by the provincial government in 1984. This decision caused a spike in enrollment to the Separate school board’s high school; a migration of students from the public high schools to the Separate high school. St. John’s College had a student population of 1,300 pupils in 1987, in a school designed to house 750 students. Portables thus became the norm. Initially provincial funding to enlarge the school was denied because there was surplus space in the public schools however, in 1988, $4.7 million was made available to finance the expansion of the school. The Separate school board also began to lobby for a second high school in the City.

A Breakfast Club was launched at Victoria School to ensure all students began the day with a full stomach. A half-day nursery school opened at Pauline Johnson Collegiate to accommodate single mothers and adult students. An alternative school was established at Victoria School in 1985 for students that had problems learning in a traditional school setting. The programme expanded to Fairview School in 1988. Special adult classes started at North Park Collegiate for adults wanting to return to high school. The public school board began to offer classes for 18 to 20 year olds incarcerated at the Brantford jail. Some students from the Jane Laycock School were moved to Prince Charles School to place them in an inclusive setting.

Mohawk College expanded their programming in 1983 from two to seven courses. The College created a downtown campus for adult retraining when the Richard Beckett Building opened in 1985. To this point the College functioned as an adult retraining centre. In 1987, it was proposed that the Brantford campus be expanded to accommodate 1,100 students and that programmes tied to the proposed telecommunications museum and an adult education centre for the visually impaired be established. The price tag was $38.7 million. The provincial government rejected the plan but did offer funds to enlarge the campus.

Enrollment in the French immersion programme offered by the public board had risen to 508 students by 1989. To contain the cost of running the programme the public school board suggested that enrollment not begin until grade four. The community voiced their outrage and the idea was dropped. 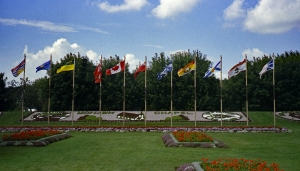 Lorne Park floral display commemorating the two-hundredth anniversary of Her Majesty’s Royal Chapel of the Mohawks, more commonly known as the Mohawk Chapel. (photo courtesy of the Brant Historical Society)

In 1981, City Council created a committee to study the recreational potential of the 22 miles of the Grand River passing through the City with particular attention on the area between the Lorne Bridge and the Brantford Southern Access Road bridge, including Earl Haig pool. Using the committee’s September-1982 report, contributions from the community, and funding from the Canada-Ontario Employment Development programme, work began on cleaning up and improving the river front, and developing and extending walkways and bicycle paths.

Earl Haig pool closed in 1983. It was in dire need of repairs. The plan was to rebuild the pool. The facility was demolished, and excavation work was completed. While waiting for the concrete to be poured for a new pool, the City learned that the cost for the pool had risen by $150,000. The City abandoned the project and in 1987 filled in the hole. This left the Eagle Place neighbourhood without a pool. The idea was then floated of building a leisure pool. 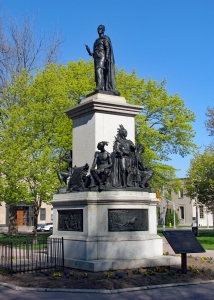 The City continued to improve Mohawk Park. The improvements resulted in an increase in the number of people who used the park. To stimulate even greater usage of the park, a project was launched in 1987 to study the feasibility of cleaning and restoring Mohawk Lake for recreational purposes. In the meantime, the Waterfront Advisory Committee worked to raise funds for boating facilities and to build an observation deck as a start to adding attractions that once made the park a popular destination. The Brant County Medical Officer of Health put a damper on this initiative when he warned that no lake activity should resume until the lake was cleaned.

The Brantford Highland Games came to an end. Operating since 1964, the organisation disbanded because of a lack of community support. The International Villages Festival continued and celebrated its tenth year in 1984. Riverfest was launched in 1988 to celebrate the City’s Grand River heritage.

The Joseph Brant statue in Victoria Park was restored in 1984. Over the years, the mortar crumbled from the joints and pieces of the bronze statuary went missing. All monuments in Brantford are now regularly maintained on a rotating schedule.

On 1-October-1984, the newly renovated Mohawk Chapel, more formally known as Her Majesty’s Royal Chapel of the Mohawks, was dedicated as a National Historic Site by Queen Elizabeth accompanied by Prince Phillip. The Royal couple planted a white pine tree and unveiled a plaque inscribed in English, French, and Mohawk.