The 1980’s witnessed labour battles resulting in long and costly strikes for both the workers and the companies. A number of long time Brantford companies closed during this decade. Highway 403 was finally opened to Highway 401 in Woodstock but it would be another nine years before the eastern portion to Hamilton was completed. Police cars go from blue to yellow to white and the police department hires its first female constables.

Workers at Worthington Canada went on strike for five months in 1980. This strike made history as the first test case of a new provincial labour law requiring employees to vote on a final offer if requested by the company.

Employees at Trailmobile were on strike for eight months in 1983. It was a nasty strike marked by acts of vandalism. The strike ended when the company threatened to close down the plant if a settlement could not be reached.

In 1979, employment at Hussman Refrigeration Company had reached 600 workers, but by 1983 it was down to 350 because of the economic downturn. During contract talks in 1984, the company asked for a two-dollar an hour wage reduction for new workers and the elimination of the cost of living bonus. These were hard won benefits that the union refused to surrender. The strikers remained on the picket line for eight months. After the company threatened to close the plant if no agreement was reached by 4-September-1984, the two sides settled with neither side gaining what they originally asked for. 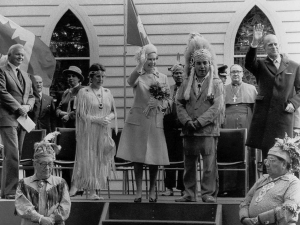 Royal Visit to the Mohawk Chapel, 1-October-1984. The visit was to unveil a plaque recognising the first Protestant church built in Ontario (1785) as a National Historic Site (1981). The visit was short, 75 minutes. The Queen is picture with Premier William Davis (left), Chief Wellington Staats (centre right), and Prince Philip (right). (photos courtesy of the Brant Historical Society)

In September-1984, 3,000 civic workers walked off the job. Job security was their number one issue. The Queen’s visit to dedicate the Mohawk Chapel was almost called off because strikers threatened to picket during her visit. During the strike, downtown garbage was not collected and access to civic construction sites were picketed, slowing down access to the sites. A Council meeting was interrupted by strikers and police were called. Police also had to accompany non-unionised salt truck drivers after a window in one of the trucks was smashed while it was in use. A 29-hour bargaining session in December-1984 concluded with an agreement. The 15-week strike was over.

Bus drivers for the Public Utilities Commission walked off the job for seven-weeks in 1988; the first strike in the PUC’s history. The issue was the removal of a clause whereby drivers were picked up before their shift and returned home after their shift by a special bus. The drivers surrendered this clause and accepted 10 minutes extra paid travel time.

Spalding Plant. This plant opened in September-1955 and replaced their Edward Street facility which was originally the A.G. Reach Company of Canada, also a maker of sporting goods equipment. The two companies merged in 1926. Spalding made golf clubs, Topflite golf balls and golf bags in Brantford. This plant closed in September-1982, 17 years after it opened. Canarinda Manufacturing Ltd. of Waterford purchased the golf making equipment in 1983. The building is currently unoccupied. (photo courtesy of the Brant Historical Society)

In March-1983 York Farms announced it was closing its plant on Canning Street and Colborne Street West resulting in 100 people out of work. This plant is now the Maple Leaf Foods chicken processing plant. 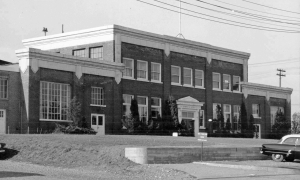 Etatech Factory at 58 Morrell Street was built in the early 1920s to make electric motors for the Canadian market. Initially the company built vacuum cleaner motors, eventually they made electric motors for almost every use. In 1978 this business was sold to a group of employee and renamed Etatech Industries. The company went into receivership in 1987. The building is currently unoccupied. (photo courtesy of the Brant Historical Society)

Etatech Industries was forced to close in 1987. The company was established in Brantford in 1919 as Robbins & Myers. The business had been employee run since 1978.

Highway 403 remained the only unfinished 400 series highway in the province. This highway was conceived in the 1950s. The Brantford cutoff portion opened on 31-October-1966, yet the highway still did not connect to Highway 401 in the west or the Queen Elizabeth Way in the east. Motorist still needed to travel Highway 2 at either end to complete their trip. Highway 2 in the west was a two-lane highway carrying heavy truck traffic. Highway 2 between Brantford and Hamilton was a four-lane highway that carried trunks and heavy commuter traffic. This portion was especially hazardous because traffic travelled well above the posted 80 km/h speed limit yet there are numerous roads, farms, houses, and businesses that front on the highway with cars and trucks turning into and out of these places. The traffic was so heavy that at times a motorist could wait 20 minutes on White Swan Road to find an opportunity to turn left onto Highway 2. Between 1978 and 1986, 710 accidents were reported on this stretch of highway resulting in 23 deaths.

Highway 403 was a vital route to and through the City, much like the railways were 80 years before. It was completed to the junction of Highway 53 outside Woodstock in 1985. The interchange with Highway 401 in Woodstock was completed in 1988. Pressure was applied to the provincial government from local citizens and governments to complete the eastern portion of the highway. In 1987, the provincial government agreed to begin construction of this portion of the highway in 1989 with completion expected by 1996. The highway finally opened in August-1997. 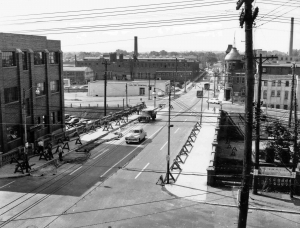 Even though the Brantford Southern Access Road (BSAR) was identified as a key component in the City’s traffic system, the 1980s saw little progress on this road. In 1985, after twenty years of negotiations, the City reached an agreement with Six Nations for a right-of-way across the Glebe property, behind Pauline Johnson Collegiate. The City also worked with the province to build an overpass over the CNR mainline tracks on Park Road North to eliminate the second most dangerous railway crossing in the province. In 1988, the City completed an agreement with the province for financing the portion of the BSAR between Market Street and Colborne Street at Park Road North. In 1989 a new agreement with the province replaced the 1969 agreement whereby the province agreed to pay 75 percent of the cost of land, design, and construction of the roadway. The money would be allocated before 1994. The BSAR was expected to be completed coincident with the opening of the eastern portion of Highway 403. 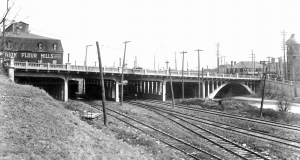 The Victoria Bridge on Market Street South was closed in 1983 in preparation for the construction of a parking garage. The bridge opened in 1912. It was damaged by a box car hitting the underside of the bridge in 1977. The bridge was demolished in 1984.

The Mulroney government’s 1989 budget slashed VIA Rail’s funding drastically; VIA’s operations were to be reduced by 55 percent. This resulted in the reduction of VIA service in Brantford to four trains a day. Previously nineteen trains a day serviced the City. Rail users and cities along the VIA corridor protested the cuts to no avail. VIA did, however, add a morning commuter train that ran between London and Toronto stopping in Woodstock and Brantford. The train became an express train between Brantford and Toronto. 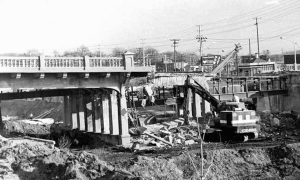 The main runway at the Brantford Airport was extended 1,000 feet, to a length of 5,000 feet, in preparation of Queen Elizabeth’s visit to the Mohawk Chapel in 1984. This was done to accommodate corporate jets.

A 1979 report of the Ontario Police Commission was finally released in the early 1980s. The report supported a 1976 report that recommended a reduction in the force’s complement. The reports concluded that taxpayers were subsidising an inefficient police force. The Police Commission rejected the report’s conclusions.

In 1981, the Police introduced yellow cars as they were deemed more visible, similar to school buses. However, the specially mixed colour became harder and more expensive to acquire. In 1988, the yellow cars were replaced with white cars. 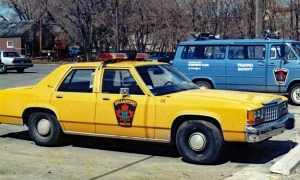 Yellow Police Cruiser. The Brantford Police used yellow coloured cruisers between 1981 and 1988. In 1988 the yellow cruisers were replaced with white cruisers. (photo from Pinterest by Timothy Boniface)

Mary Emma Hammond vanished during the early morning hours of 8-September-1983, walking to her job at the Buns Master Bakery on Morton Avenue East. An extensive police investigation that included the use of hypnotism on two witnesses turned up no useful clues. In 2012 the case was reopened based on new evidence. The mystery of Mary’s disappearance has still not been solved.

In October-1983, the Crime Stoppers programme was introduced. This programme is designed to assist police with information by obtaining tips from the public.

The City’s police station was in dire need of an upgrade and expansion by the 1980s. The police station, opened in 1954, was designed to accommodate 90 people. In 1985 the police department had 138 people working at the station. A 1986 report noted that a station would need almost twice as much space as currently existed and contain facilities for female officers. Money for a new station was cut from the 1986 budget. A 1988 public inspection again raised the issue. The options were expansion or a new build. The Police Commission favoured a new build at Park Road North and Elgin Street. Council rejected this proposal and asked the Commission to review all possible locations. Thirty locations were reviewed and the Park Road North at Elgin Street location was again recommended. Council approved this recommendation in February-1989, but the delay saw the cost of the project increase by $2 million.

In May-1985, the department’s first two female constables were hired, Judy Hobbs and Nancy Nichol Bielawski. The women faced a number of challenges. Their uniforms were tailored for men and the Station on Greenwich Street lacked a change room for female officers; the constables used a storage closet to change.

In 1986, the police acquired a mobile command centre at a cost of $79,000. It looked like a recreational vehicle crammed full of communication equipment.

In 1989, the downtown foot patrol was reintroduced in order to increase police presence downtown. A police substation was also opened.

As the economy deteriorated, crime increased, including violent and drug-related offences. The crime rate in 1983 was the highest in the province. By 1989, the rates of crime had declined.

Fires continued to plague the City. In 1982, a fire of suspicious origins destroyed the Iron Horse Restaurant on Market Street South at Erie Avenue. The restaurant was housed in the former Toronto, Hamilton & Buffalo railway station. The building was rebuilt restoring the train station.

In December-1986, two warehouses of the former Cockshutt Plow Works caught fire. The blaze was fought by 23 firefighters.