The 1980s was a tumultuous time for the farm equipment industry. The closing of Massey’s and White’s rocked Brantford. Would the City ever recover, or was this the beginning of a continuous decline for Brantford?

The good times of the 1970’s were expected to continue into the 1980’s. Growth was projected to average three percent throughout the decade. However, the slowdown of the economy came fast and furiously. In July-1980, the total number unemployed in the City reached 4,500, in May it had only been 1,000.

Massey-Ferguson and White Farm Equipment were in financial trouble, the worst they ever experienced. To conserve cash, Massey-Ferguson extended their usual one-month summer shutdown to three-months.

The parent company of White Farm Equipment, White Motor Company of Canada, sustained heavy losses during the first six-months of 1980. This led to rumours that the Brantford operation would be sold or closed down. In July, White Motor Company of Canada entered into voluntary bankruptcy to reorganise their debt. The planned two-month shutdown of the Brantford White Farm Equipment plant was extended indefinitely.

The workers at White Farm Equipment accepted a modified contract in March-1981. This led to the recalling of workers laid-off and assisted in closing the sale of the company to Linamar Machine Ltd. of Guelph and Texas-based TIC Investment. In spite of these moves, 200 workers were laid-off in August as market conditions did not improve. These workers were not eligible for unemployment insurance because they did not work long enough to qualify. 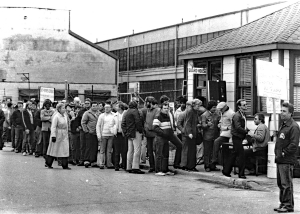 In April, Massey-Ferguson announced the closing of their factory in Des Moines, Iowa, moving 220 jobs to Brantford. The company also received loan guarantees from the federal and provincial governments. The Brantford plant was shut down in November because of the continuing poor market conditions; the second shutdown in two years.

Local service and support companies felt the effect of the shutdowns. Social services were dealing with a large increase in demand, demand that outstripped the ability to provide timely assistance. The Mayor-Warden’s Committee on Services to the Unemployed, a joint City/County taskforce, was organised so the newly unemployed would know what local community services were available to them. The Brant Social Services Committee was seeking federal and provincial assistance with welfare payments and job creation.

By the end of 1981, unemployment stood at over 22 percent, 8,000 workers were out of work. A Toronto writer wrote: …Brantford is taking a beating the likes of which hasn’t been seen since the Great Depression. Besides the high level of unemployment, the City faced a significant increase in welfare cases, an increase in property taxes, and a decrease in housing starts. Because of the publicity around how poor the local economy was, the City was not able to place $1.1 million worth of the bonds in the market at a reasonable interest rate in June-1982. 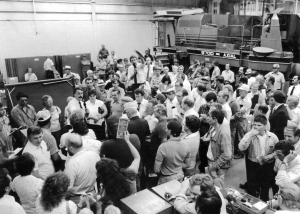 The City did not stand idle during these turbulent times. Efforts were made to diversify the local economy. Local manufacturers were asked to acquire their parts from local firms rather than importing them. Development of the Northwest Industrial Park began as the Braneida Industrial Park had virtually no vacant land available.

The federal government established the Industry and Labour Adjustment Programme, a scheme to provide funding for companies to relocate or expand in hard hit regions. The City’s request for ILAP assistance was approved in January-1982.

The expected turnaround at Massey-Ferguson in 1982 did not occur. Although 1,800 workers were recalled in January and the company announced that the production of four-wheel drive tractors was to start in November, continuing poor market conditions forced the shutdown of the plant in August. 200 salaried staff were also laid-off. In September, the company extended the shutdown into the next year and also shut down their Toronto plant.

The effects from the ILAP programme were felt immediately. After the one-year programme had run its course, Brantford had seen the best results of all the communities using ILAP, thus a six-month extension was granted. ILAP helped create 3,000 new jobs in the area, twice the number originally expected. 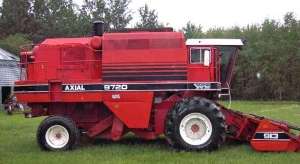 White Farm Equipment was in poor shape although it did have one ace up its sleeve. The factory developed and held the patent for the manufacture of a new axial-flow rotary combine; a revolutionary development in combine engineering. In March-1982, the company announced plans to close the plant indefinitely, laying-off 925 workers. To keep the plant alive TIC Investment took control of the company and promised to guarantee 1,200 jobs until at least 1990 for the rights to the new combine. However, the company was not able to repay its bank loans and could not secure any further government assistance. On 13-June-1983, the banks forced the company into bankruptcy. The employees tried to buy the plant and the combine technology but were not able to raise the money. In December-1983, Borg-Warner Acceptance Corporation of Chicago bought the company and negotiated a new contract with the workers. 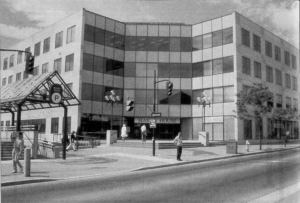 Massey House, the head office of Massey Combines Corporation. The company moved here in December-1987, four months before they filed for bankruptcy. (photo courtesy of the Brant Historical Society)

With the new 9720 axial-flow combine the company was able to increase its Canadian market share from seven percent to twenty-two percent. In March-1985, 250 employees were laid-off. On 10-April-1985, the company was again placed into receivership. The province was willing to increase its loan guarantees, but the federal government was not. With no other money available, the company was forced to liquidate, after 108 years in business. The rumour was that Massey-Ferguson thwarted the rescue effort in order to get its hands on the axial-flow technology from the receiver. The contents of the company’s engineering centre went on the auction block in September-1985.
Massey-Ferguson began calling back workers in January-1983. In April-1983, the company announced plans to close its Toronto plant within two to five years and move all production to Brantford. The plant’s future looked secure. In 1984 the company invested $5.5 million to upgrade its Park Road North complex. In 1985, the company announced it would be the major tenant at Massey House, a new office tower in downtown Brantford located across the street from the library. It is now Laurier’s Grand River Hall. 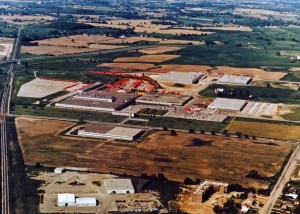 1985 turned out to be a disastrous year for the company, only 1,100 combines were produced. During the period 1979 to 1981 the company produced 35,000 combines in Brantford. 1,325 workers were laid-off in November-1985. When things look bleak and sales do not materialise what is a company to do? Reorganise. When everything else fails shuffle the deck.

At the end of 1985, the combine division was reorganised as a separate company; everything combine related was moved to Brantford including production, research, and marketing. In May-1986, Massey-Ferguson was divided into two separate companies, the combine company became Massey Combines Corporation, based in Brantford, and the rest of the company was reorganised as Varity Corporation. Varity was chosen to recognise the Verity Plow Company, an early constituent piece of Massey-Harris. Is it a coincidence that Varity rather than Verity was used? The president of the Massey-Ferguson at this time was Victor A. Rice – VARity. Varity moved to Buffalo, NY in 1991 and ceased to become a Canadian company.

Virtually all of the debt of Massey-Ferguson was transferred to Massey Combines, creating an unsustainable financial situation for the new company. Unable to meet its payment to a creditor, the company was forced into bankruptcy on 4-March-1988. The unimaginable, Brantford without Massey, became reality. As much as the closing was expected, the finality still came as a shock to the city.

Was the separation of Massey Combine and Varity Corporation an attempt by Victor Rice, Massey-Ferguson’s President, who engineered the reorganisation, an attempt to jettison an unwanted and unprofitable portion of the business? The bankruptcy resulted in retirees with capped pensions and no health benefits.

As the drama of the decline of the two pillars of the Brantford economy played out, the City was busy improving and expanding its industrial base. The unemployment rate in the City dropped drastically by the end of 1983. The City’s Director of Economic Development declared 1984 as a banner year as 14 new companies established themselves in the City.

Success continued into 1985. 28 new manufacturing firms located in the City in two years which led to the creation of 1,600 new jobs. The City no longer had trouble selling its debentures. The unemployment rate had decreased to 12 percent by October-1985. Building permits had increased and Revenue Canada reported that workers in the City were making more money. 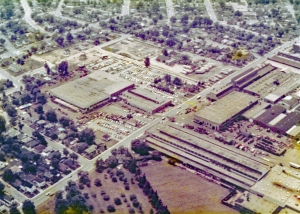 Some of the new names on the industrial scene included Westcan Electrical Manufacturing Ltd., attracted by the ILAP programme, Kuriyama Canada, the City’s first Japanese company, that specialises in hoses for agricultural and industrial machinery, Inmont Canada, a manufacturer of paint finishes for the auto industry, Slacan, a division of Slater Steel, and Koolatron Corporation, a manufacturer of portable refrigerators. Although Brantford was not able to attract the new Toyota plant or the GM/Suzuki joint venture, the closeness of the plants to Brantford helped automotive parts suppliers in town.

The City purchased 150 acres of Massey Combines property to add to its industrial land reserve. The Massey complex became the Brant Trade and Industrial Park that attracted small and large industrial tenants. In November-1989, Stelco Fasteners, a bolt and nut supply for the auto industry, became the Park’s first major tenant. 67 new companies settled in Brantford between 1988 and 1989.

We use cookies on our website to give you the most relevant experience by remembering your preferences and repeat visits. By clicking “Accept”, you consent to the use of ALL the cookies.
Cookie settingsACCEPT
Manage consent