In the 1980’s a new party represents Brantford in the Ontario Legislature, the first female mayor is elected, a long time City Councillor passes away and the City annexes almost 5,000 acres from Brantford Township. Local residents felt disengaged from the City, the Public Library was woefully inadequate to meet the needs of residents, the City designates its first heritage district and a major landslide destabilises the river bank along Colborne Street at the eastern limits of the City.

Derek Blackburn of the New Democratic Party was Brantford’s elected member of Parliament for the whole decade. Derek was first elected in 1971. 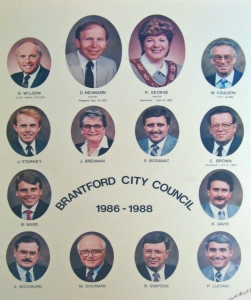 City Council for the three year term 1986 to 1988. David Neumann was elected to the Ontario Legislature in 1987. Karen George was appointed Mayor by the City Councillors to fulfill the role for the remainder of the term. Photo courtesy of Brant Historical Society

David Neumann, an alderman since 1976, defeated incumbent Charles Bowen in the mayoralty race of 1980. Neumann served as mayor until 1987 when he was elected MPP for Brantford. Rather than conducting a by-election City Council appointed Karen George as mayor. George was Brantford’s first female mayor.

Charles Ward, known as Charlie to his friends, passed away in 1982 at the age of 90. A local icon, he served as an alderman for all but two years since first being elected in 1952. At the time of his passing Ward was the oldest holder of an elected office in Canada.

As the 1970s ended, the City again needed to expand in order to accommodate population growth. Annexation talks commenced with Brantford Township in 1979. After six months of negotiations, in April-1980, the two sides came to terms. The City would annex 4,660 acres of Brantford Township land, which happened to include one-third of its population. The City agreed not to seek annexation of Township lands for at least 23 years, and the Township agreed not to develop lands along its border with the City. With this agreement, any idea of regional government in this area ended.

In 1980, the City hired a Chief Administrative Officer so that City Council could focus on policy setting and reduce the time it spent on administrative matters. The term of the mayor and aldermen was extended to three years, from two, in 1982. 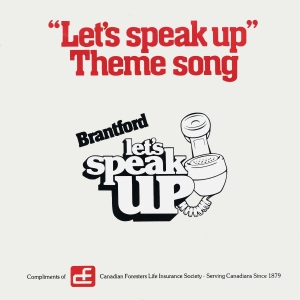 Let’s Speak Up record. This campaign was designed to boost civic pride in the City. The campaign was supported by advertisements, media releases, and a theme song. Other cities were conducting similar campaigns, among them Hamilton and Buffalo, NY. Photo courtesy of the Brant Historical Society

According to a 1980 consultant’s report, leadership at City Hall was lacking. This lead to citizen apathy. The City needed to engage with its the residents and market what the City had to offer. The City needed an image makeover. In 1984, the Let’s Speak Up campaign was launched to boost Brantford’s image locally. The campaign was supported by advertisements, media releases, and a theme song.

A 1979 report outlined the inadequacies of the Brantford’s Public Library system, remarking they were housed in cramped quarters in the Carnegie Building, that opened in 1904. The Library Board was asking for a new building, ideally located on the southwest corner of Colborne and Market Streets, the busiest intersection in the City. The Forbes Brothers property on Darling and Queen Streets was recommended but a failure to secure a Wintario grant scuttled plans for this project. A new library languished on the City’s capital projects priority list. Suddenly in 1989, the City announced it would purchase the Woolco store at the southeast corner of Colborne and Market Streets and convert the building into a new library. It was hoped that the library would serve as a traffic generator for the downtown. 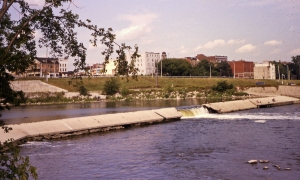 Lorne Dam 1984. The photograph shows the state of deterioration of the dam. The dam was removed in 1989. Photo courtesy of the Brant Historical Society

The Lorne Dam had long been deteriorating. A 1982 report declared that given the advanced state of deterioration the dam needed to be either repaired, replaced, or removed. No action was taken. Finally, in 1989, on the advice of Grand River Conservation Authority, the dam was removed.

Tipping fees, a fee to dump garbage at the municipal landfill site, were introduced at the Brantford landfill site in 1981. A one-year trial project for a recycling programme was launched in 1986. The programme continued beyond the trial period due to strong public support.

In 1982, the Brant Multicultural and Citizenship Council merged with the International Villages Festival committee to form the Brantford Ethnic Festival and Cultural Society. The purpose was to offer settlement services to immigrants and refugees settling in Brantford and Brant County and to encourage multiculturalism. The name of the organisation was later changed to Immigrant Settlement and Counselling Service of Brant. 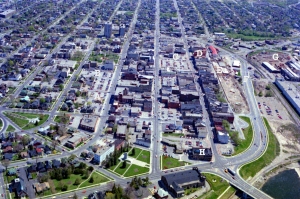 Brantford Downtown 1984. An aerial photograph of downtown Brantford. Photo courtesy of Brant Historical Society.
A. The site of the Darling Court courthouse.
B. The site of the Brantford Transit terminal.
C. The site of Eaton’s Market Square Mall.
D. Beckett Building
E. Construction of the parking garage.
F. The Ring Road, now known as Icomm Drive.
G. Timberjack, formerly Koehring-Waterous, now the site of Brantford Commons and the Fresh Co. grocery store.
H. Best View hotel, now the site of the Royal Bank of Canada building.
I. Bridge Street. This portion was closed when the Ring Road opened and the Brant Avenue / Colborne Street intersection was reconfigured.

Heritage building awareness started to gain traction in the 1980s. The demolition of heritage homes along Brant Avenue at Church Street for the construction of a nondescript strip plaza became the lightning rod for action. A 1981 City bylaw restricting properties along Brant Avenue to residential offices or personal service businesses was rejected by the Ontario Municipal Board as not in the public interest, a more comprehensive study of the street would be required. The planning department proposed a heritage district to Council in 1983 but Council maintained their policy of not designating any building without the owners’ consent.

In 1987, the owner of the Commercial Building at the corner of Dalhousie and George Streets wanted to demolish the 106-year old building. Pressure from the City’s Heritage Committee and discussions with the owner led to the preservation and designation of this building. Council, realising how quickly and easily a prominent heritage building could be demolished due to a lack of any heritage protection whatsoever, moved to designate the streetscape of Brant Avenue as a Heritage Conservation District in 1989. The district encompasses buildings along Brant Avenue from the Lorne Bridge to St. Paul Avenue. The district consisted of 132 properties which include residential, commercial and public use buildings. Most of the homes were constructed between 1870 and 1889 as Brantford was experiencing an industrial boom. The movers and shakers of Brantford lived here and on adjacent streets during this boom period. The buildings feature traditional architectural styles including Neo-Classical, Italianate, Gothic, and Queen Anne, creating an interesting streetscape. 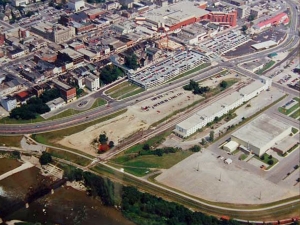 When the Brant County War Memorial was unveiled in 1933, it did not include the statue of soldiers that the designer, Walter S. Allward envisioned for the memorial. In 1956, a gallery honouring the fallen from the Second World War and the Korean War was added to the memorial. In 1987, a veterans group set up a committee to fundraise $300,000 for the addition of statues to the war memorial to complete Allward’s vision and design. Rather than six statues, seven statues were commissioned to recognise the efforts of women in the war effort. Winnipeg’s Helen Granger Young was the artist commissioned to design and build the statues.

Declining church attendance caused City congregations to begin to consider amalgamating. The old churches were costly to operate and maintain and declining membership meant reduced weekly collections. Colborne Street United Church and Zion United Church were the first to consider amalgamation. Although this merge did not occur, the template was set. Marlborough Street United and Cainsville United became the first two churches to merge, creating Harmony United Church in 1994.

The south side of Colborne Street from Clara Avenue to the TH&B underpass at the city limits was full of houses and businesses, Clubine Lumber, Sunys gas bar, and some restaurants. On 22-May-1986 a landslide of unprecedented proportions occurred. Four houses had to be evacuated, twenty more were threatened by further slides, and the TH&B rail line running along the edge of the Grand River was obliterated. This portion of Colborne Street lies above an ox bow in the river. The flowing river slowly erodes the river bank as the water rubs up against the shore as it changes direction around the bend in the river. 125 feet of the embankment was washed away. The landslide closed the rail line between Hamilton and Brantford for good as the slope was considered too unstable to repair the line. This was the largest landslide to take place in Ontario.

The City needed to stabilise the embankment and work out a compensation agreement for the affected property owners. The stabilisation effort would take between seven to ten years to complete at a cost of almost $15 million. Property owners were advised that if they chose to remain on their properties, it would be at their own risk. A compensation agreement was worked out between the province, the City, and the Grand River Conservation Authority. Compensation was based on the pre-landslide value of the properties. The province would pay 55 percent of the property value, and the GRCA ten percent. The remaining 35 percent would be split between the City and property owner. The property owners did not feel the compensation package was adequate and were prepared to appeal to the Ontario Municipal Board as the decade closed. All the properties were finally vacated and demolished by 2015.