The 1980s saw significant changes in Brantford’s downtown. New developments designed to reinvigorate the downtown totalled $50 million, yet, as much as there were new development proposals, some things did not change. Downtown Colborne Street continued to see an exodus of businesses and the buildings continued to deteriorate due to the lack of enforcement of property standards. In spite of all the investment, downtown residents largely stayed away and did not venture downtown. 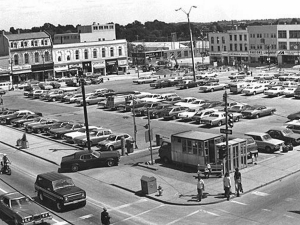 Development of the Market Square seemed imminent when Campeau Corporation and the T. Eaton Company agreed to a partnership to redevelop the property. The plan included an Eaton’s store at the east end of the development, a 550-space parking garage, retail stores, and a 300-space parking garage at the corner of Colborne and Bain Streets with a skywalk to the Eaton’s store. The province agreed to a $6.4 million loan for the project in January-1980. The provincial loan was contingent on a signed agreement between the City and Campeau by 30-April. However, the development would be plagued with delays. 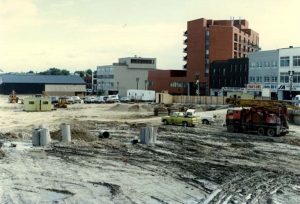 Construction of the Eaton Market Square from the same point of the view as the 1980 photo. Note the newly opened Becket Building just to the right of centre. (photo courtesy of the Brant Historical Society)

Before an agreement could be signed, all the necessary property for the redevelopment would have to be assembled. Acquiring the land proved problematic because downtown merchants who owned property required for the development were not all supportive of the development. City Council would not pursue expropriation as an avenue to solve the impasse. The City was reluctant to close George Street but Eaton’s was adamant that it wanted to build on this roadway, in order to be directly connected to the mall. This was a deal breaker for Eaton’s. The new development required the downtown plan to be amended and resubmitted to the Ontario Municipal Board for approval. Remember, all these things needed to be accomplished in four months to be eligible for the government loan. 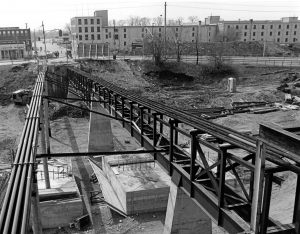 Construction of the parking garage looking down Market Street South along the sightline of the former Victoria Bridge. (photo by J. Miklos, courtesy of the Brant Historical Society)

In June, Campeau announced that it was unable to attract a supermarket to the development. In October, Eaton’s pulled out of the development as a partner but agreed to remain as a tenant. The City requested another extension of the provincial loan guarantee. In December, Eaton’s threatened to withdraw from the development entirely if the proposed expansion of the Brantford Mall, which included a major department store, was approved by Brantford Township. The City intervened with the Minister of Housing implementing a partial freeze on the Brantford Mall development.

On 1-January- 1981, the City would annex Greenbrier and Wyndham Hills from Brantford Township which included the Brantford Mall. On 29-December-1980, Brantford Township issued building permits for the expansion of the Brantford Mall. The City immediately passed a bylaw in early 1981 to limit any development at the Mall site. The Mall launched a court action against the City to rescind the bylaw. The parties settled the issue in February-1982 when the City allowed expansion to proceed with the proviso that the Mall not apply for a building permit until 1-July-1983 or until the foundation of the downtown development was in place. 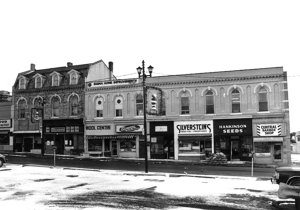 George Street store fronts 1980. These building were demolished, and the businesses relocated, to make way for the Eaton Market Square Mall development. (photo courtesy of the Brant Historical Society)

Meanwhile, negotiations between Campeau and the City dragged on. Settlement with property owners along George Street still had to be reached. Campeau needed an extension to conduct soil tests, complete its agreement with Eaton’s, and find retail tenants for the mall. The City asked the provincial government for an increase to the loan guarantee; the province agreed to increase the loan to $7.4 million.

The downtown development plans would change again. The parking garages would be combined into one structure, a mini-mall would be constructed at Colborne and Bain Streets to house the displaced merchants from George Street, and Market Street would be closed between Colborne and Dalhousie Streets to be replaced by a pedestrian walkway.

On 20-July-1981, a formal agreement between the City, Campeau, and Eaton’s was signed. Eaton’s agreed to operate their store for at least 35 years and Campeau posted a $500,000 letter of credit against the company withdrawing from the project. 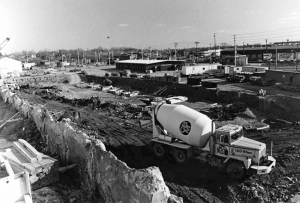 Construction of the parking garage looking towards the Farmers’ Market. (photo by J. Miklos, courtesy of the Brant Historical Society)

In October-1982 Campeau asked for a one-year extension to begin the project. The company was having difficulty signing tenants for the property and the economy was poor, so mortgage money was not available. The City granted Campeau an extension to June-1984.

The delays only added to the cost of the project. Rumours swirled that Eaton’s was ready to pull out. The province contributed another $2 million to the project.

On 29-June-1984, a settlement was reached between the City and Campeau clearing the way for the development of Market Square to begin. The cost of the development was now estimated to be $37 million. The cost to the City increased by $3.4 million. This included a loan to Campeau for a public space inside the mall, and the relocation of services on Market Street. A sod turning ceremony was held in April-1985.

Work on the $12 million parking garage was delayed. Scheduled to open in 1985, the parking garage was not completed until June-1986. The contract for the structure was awarded to a local company, Sternson Ltd. Within a month of opening blistering occurred on the top deck and the floor had to be resurfaced. 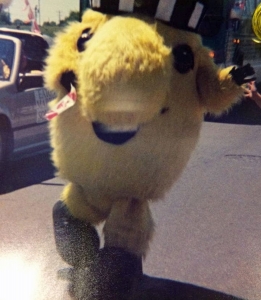 The Eaton Market Square Mall formally opened on 19-August-1986. 1,500 guests were invited to the opening. The Expositor marked the occasion by writing …the opening of a bright new era in the long history of the city’s core area.
Other efforts were initiated to increase the appeal and traffic downtown. The downtown was rebranded as City Centre, complete with a mascot, Seemore. A walk of fame was established on the west side of the Pauwel’s Travel Centre Building, next to the Dalhousie Street parking lot that featured the portraits of Joseph Brant, Alexander Graham Bell, Pauline Johnson, Jay Silverheels, and Wayne Gretzky. These portraits were painted by Hendrik Lenis and Wayne Phillips.

The Richard Beckett Building opened at the corner of Colborne and Bain Streets in 1985. Beckett was the mayor of Brantford between 1961 and 1970. The building contained a downtown campus of Mohawk College, offices, a senior citizens’ drop-in centre, and 63 low cost apartments for seniors. It was hoped that the building would spur further development of residential living downtown. 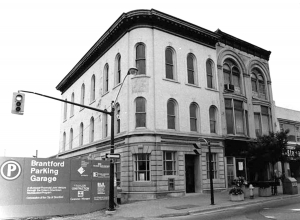 Bank of Nova Scotia and Keachie buildings at the south west corner of Colborne and Market Streets. Originally the site of the Bank of Hamilton. The Bank of Hamilton merged with the Canadian Bank of Commerce in 1924. The bank of Nova Scotia was located in this building until the bank moved into their new branch across the street in 1980. (photo by J Miklos, courtesy of the Brant Historical Society)

Demolition of the former Bank of Nova Scotia building at the corner of Colborne and Market Streets occurred in November-1985 to clear the land for the construction of Massey House, a six-storey office building, by Campeau. The building was to house the offices of Massey Combines Corporation. The company moved into their new offices in December-1986 and filed for bankruptcy in March-1987. Massey was replaced by the Holstein Association of Canada. The building was renamed Holstein Place. 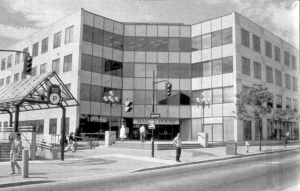 Massey House is built on the site of the Bank of Nova Scotia building, Keachie building, and the Belmont Hotel. Massey Combines Corporation moved their head office here in December-1986, four months before they filed for bankruptcy. (photo courtesy of the Brant Historical Society)

In 1986, construction began on Darling Court on Darling and Queen Streets which houses provincial government services. It opened in 1987.

• Renaissance Place was to be a retail and apartment project in the Arcade Building at Colborne and Queen Streets;

• A 15-storey Constellation Hotel to be built were the Royal Bank building is today at the corner of Brant Avenue and Colborne Street. The Best View Hotel was purchased by the City and demolished to make way for this anchor development at the west end of the downtown. 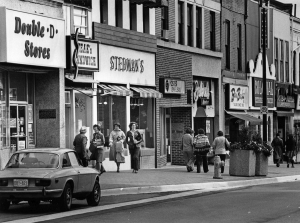 Stedman’s Bookstore and other businesses along the north side of Colborne Street in the early 1980s. Stedman’s was a long time fixture in downtown Brantford in the 20th-century. (photo courtesy of the Brant Historical Society)

In spite of the new developments and marketing initiatives to get people downtown, the downtown continued to deteriorate. The old buildings along Colborne Street were not well maintained and businesses continued to close, even long-established businesses like Stedman’s Book Store. Citizens outside the downtown area were no longer comfortable visiting the downtown. These conditions led to the demise of the proposals mentioned above. 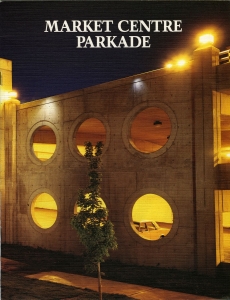 The synchronisation of the downtown traffic lights continued to elicit angry responses from the motoring public. This had been an issue since the introduction of one-way streets in 1954. In 1981, the City took part in an experimental computerised traffic light system sponsored by the Ministry of Transportation. The system cost $630,000 to implement. In 1983 the system was still not operational. Another two years passed when a consultant finally determined that the City did not assign sufficient staff to operate and manage the system, and as a cost savings measure the City purchased electrical-mechanical controllers rather than solid-state controllers. Municipalities that installed the solid-state controllers experienced few problems.

Was downtown Brantford in a better state by the end of the decade than it was going into the 1980s? Even after millions of dollars were spent on new developments, the bulk of the downtown still contained old, commercially empty 19th-century buildings that were poorly maintained which did not create a safe and welcoming environment.