Brantford in the 1970’s: Part 5 – Retail and Commercial Changes 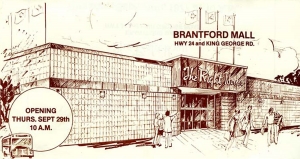 Brantford was no longer a city in transition. Change was well underway. New suburban housing and commercial developments were being built. The downtown began its rapid decline as the commercial centre of the City, it would be supplanted by Lynden Park Mall, Brantford Mall and strip mall developments along King George Road. Retail growth along Colborne Street serving the east end of the City was also occurring and mirroring the developments along King George Road. 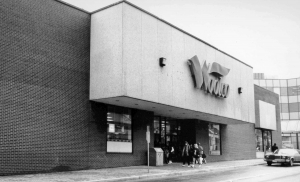 Woolco in downtown Brantford. This store was enlarged and renovated by Woolworth’s in 1972 and rebranded Woolco in 1977. The building is now the home of the Brantford Public Library. (Image courtesy of the Brant Historical Society)

Expansion of the Brantford Plaza began in 1971. The expansion added 65,000 square feet of new space that included a drug store and a three-screen cinema, Cinemas 3. This was Brantford’s first multiplex theatre. The largest theatre sat 500; the other two accommodated 300 patrons each. Woolco increased its floor space by another 15,000 square feet. Construction was completed in 1972 and the shopping centre was renamed Brantford Mall, Brantford’s first fully enclosed shopping mall. The mall featured Woolco and Loblaw’s as its anchor stores. Super City Discount Foods was enlarged and rebranded to Loblaw’s. The changes at the Brantford Plaza were a counteroffensive to the pending development of Lynden Park Mall at Lynden Road and Park Road North. 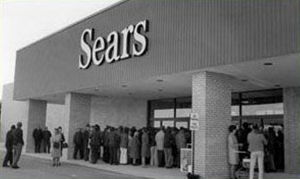 Shoppers queued up for the opening of Sears at the Lynden Park Mall on 1-May-1974. (Image courtesy of the Brant Historical Society) 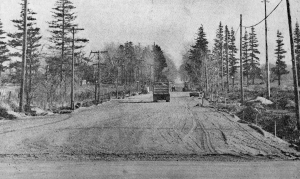 Lynden Road being widened and rebuilt in November-1973 in anticipation of the opening of Lynden park Mall in May and August 1974. (Image courtesy of the Brant Historical Society)

Lynden Park Mall opened in 1974 in two stages. The anchor stores, Kmart and Sears, opened on 1-May-1974. Construction of the mall continued after the anchor stores opened and the mall proper that connected the two stores opened on 1-August-1974. Lynden Park Mall featured Miracle Food Mart, Sneaky Pete’s and the Tudor Arms Restaurants, Royal Bank, Canadian Imperial Bank of Commerce, People’s Jewellers, Coles Bookstore, Laura Secord, Camerama and many others, about 80 stores in total. The Kmart store closed in 1998 after Kmart Canada was acquired by the Hudson Bay Company. The Sears store closed on 14-January-2018 because of the bankruptcy of the company. 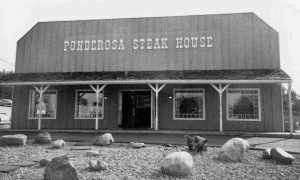 Ponderosa Steak House. A steak dinner complete with potato, vegetable, and salad was $1.89 in 1972. (Image courtesy of the Brant Historical Society) 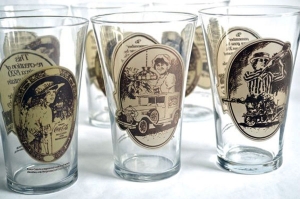 Soda glasses promotion at Mother’s Pizza Parlour and Spaghetti House. These glasses still appear in many cupboards in the city. (Image courtesy of the Brant Historical Society)

Shoprite Catalogue store opened in 1972 at 250 King George Road, the present location of Al Dente restaurant. During the early 1970s catalogue shopping became all the rage. Within ten years only Consumers Distributing remained. 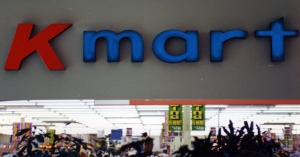 In downtown Brantford Loblaw’s closed their store at 20 Darling Street in 1971. Woolworth’s enlarged and modernised their store in 1972, installing escalators, the first escalators in Brantford. Mike Suerich opens Mike’s Camera Shop at 40 Dalhousie Street, in the Lough’s Block. Mike was the Manager of the camera department at Woolco before he ventured on his own. Paul’s Furniture and Sound moved to 225 Colborne Street from the Mohawk Plaza. The Mohawk Plaza store opened in 1970. In 1976 Paul’s buys the old National Grocers Building at 251 Colborne Street and relocates the store.

Don Heys, a long-time employee at Parson’s Radio and Electric, opened his own store, Don Heys Appliances, 193 Colborne Street in 1975. Dirty Dan the Discount Man opened a second location in the old Canadian Tire Store at Colborne and Clarence Streets. Their Erie Avenue store was closed in 1977. 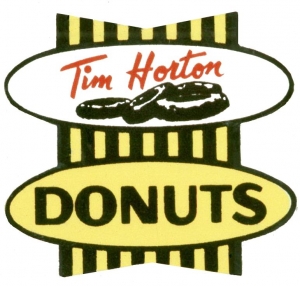 When Tim Horton first opened in Brantford it was known as Tim Horton Donuts. It was later abbreviated to Tim Horton’s. In the 1990s the emphasis on Donuts was removed and replaced with Always Fresh. The apostrophe was also dropped.

The Dominion store at Market and Darling Streets closed on 26-March-1977. The 10 full time employees were transferred to the St Paul Avenue store and to stores in Hamilton and Cambridge. The building was purchased by the Toronto Dominion Bank in September-1976. TD closed their branch at Dalhousie and Market Streets after this new 4,500 square foot space was renovated.

Also in 1977, the Prince Edward Hotel at the corner of Colborne and Bridge Streets changed its name to the Best View Hotel, the Woolworth store was rebranded Woolco and the A & N Store (Army & Navy) opened in the former Right House location, 147 Colborne Street. The Bank of Nova Scotia opened their new bank building at 170 Colborne Street at Market Street in 1979. The building is located across the street from their long-time branch which was demolished and replaced by Massey House, the new administrative office for Massey Combine Corporation. Cowboy’s night club (now Club NV) opened at 234 Colborne Street in 1980. A & N Store closed in 1980 due to diminishing downtown retail traffic. 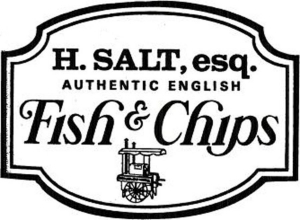 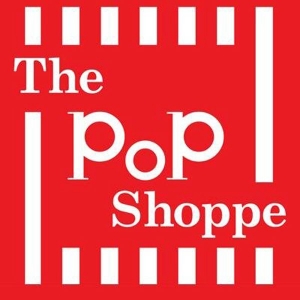 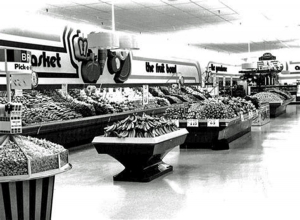 Calbeck’s fourth store in Brantford opened at the North Park Plaza on Fairview Drive in 1979. This photo shows the in direct lighting used in the store. The lights fixtures hang down from the ceiling and cast the light upwards to reflect off the ceiling. (Image courtesy of the Brant Historical Society)

Calbeck’s Food Markets opened their fourth Brantford location in 1979 at 225 Fairview Drive at Hayhurst Road. This store featured indirect lighting, light was reflected off the ceiling rather than from the ceiling. Calbeck’s also had stores in Paris, Waterford, Simcoe, and Port Dover.

With the opening of the new Loblaw’s store at the Brantford Mall in 1972 the grocery store at 10 King George Road at St Paul Avenue was closed. This store launched the suburban shopping centre in Brantford. The store was renovated into a Home Hardware Store, the largest Home Hardware store in Canada at that time.

A & P closed both of their Brantford stores, 43 King George Road at Queensway Drive and 27 Stanley Street at Dalhousie Street in 1974. These mid-1950’s built stores did not offer the range of products the newer and bigger supermarkets carried.

Big changes are in store for two of the City’s major employers, the downtown and King George Road in the 1980s.