Brantford was no longer a city in transition. Change was well underway. New suburban housing and commercial developments were being built, primarily in the north end. The downtown began its rapid decline as the commercial centre of the City, it would be supplanted by Lynden Park Mall and strip mall developments along King George Road. The manufacturing sector was humming along nicely; there were well paying jobs available for young men right out of high school. The optimism of the decade did not foresee economic events that would culminate in the 1980s that would forever change the City.

Industry
As the 1970s began the local economy was stagnant. Population growth was slow and unemployment levels were high. Brantford was added to the provincial government’s list of slow growth areas making it eligible for provincial loans for new businesses and local business expansion. The City also became eligible for federal Local Initiative Programme grants. These programmes had the desired effect. Massey-Ferguson bought 187 acres between Henry Street and Highway 403 to double their land holdings. Keep Rite, G.W.G., Sonoco, S.C. Johnson, Gates Rubber, Hussman, and Crown Electric all undertook major plant expansions. By 1973, the unemployment rate had been reduced to 5 percent from 10 percent in 1970, one of the best rates in the country.

The growth created demand for more land for housing and industry. The Easton Road, Copernicus Boulevard, Dalkeith Drive area was set aside for industry rather than housing in 1975, because the City’s supply of available vacant industrial lands was virtually used up.

Offsetting some of the employment gains were factory closures. Canadian Westinghouse closed their television plant on Greenwich Street in 1971 costing 250 jobs. Strikes in 1969 and 1970 and a rising Canadian dollar were cited as the reasons for the closure. Sterling Action and Keys also closed in 1971 because of Japanese competition. In 1972, National Grocers closed their Brantford operation. Brantford Cordage, Canada’s largest rope and twine maker also closed in 1972 after 70 years in business because of tariff reductions on incoming rope and twine. In 1975, Weston Foods closed the Paterson candy factory on Colborne Street because the factory was obsolete, resulting in 165 jobs lost.

Brantford Carriage / Bay State Abrasives Factories 1976 – Brantford Carriage Company (left foreground) opened this factory on Pearl Street in 1888. The company was acquired by the Cockshutt Plow Company in 1911. By the late 1940s this factory had become a parts warehouse for the Cockshutt Plow Company. The building was demolished in 1984 because it was structurally unsound. White Farm Equipment declared bankruptcy in 1985. Saorsie Co-operative Homes now occupies the site. This redevelopment started in 1989. Bay State Abrasives (right building) began at this location as Brantford Emery Wheel Company in 1910. It became the Brantford Grinding Wheel Company in 1920. Bay State Abrasive acquired the factory in 1939. The factory was closed in 1989 by Florida-based Abrasive Industries when production was moved to the U.S. (image courtesy of the Brant Historical Society)

Labour unrest continued into the 1970s. The Texpack strike, which began on 16-July-1971, when 200 Canadian Textile and Chemical Union workers set up picket lines, was the most notorious. Texpack was a manufacturer of hospital supplies. The union was seeking a 35 cents-an-hour wage increase, a cost of living allowance, improved welfare provisions and vacation and statutory holiday pay improvements. The plant continued production, bringing in replacement workers from Hamilton. The strikers attempted to stop the shipment of goods into and out of the plant and prevent the replacement workers from entering the property. Windshields were shattered, factory windows broken, fire bombs were thrown, threats were made against the replacement workers, and gun shots were fired. The Police were called to escort office workers into the plant. Determined to break the strike, the company resorted to recalling laid off workers and advertising for permanent replacement workers. Violence on the picket line escalated. An injunction was issued to limit the number of picketers. The struggle and violence by the strikers against the company was reported daily by The Expositor and CHCH-TV in Hamilton. On 25-August-1971, what started out as a peaceful demonstration of 700 people turned ugly, with even firefighters being pelted with stones when they tried to put out a fire started by the demonstrators. The next day the police’s riot squad was called out for the first time ever because of continuing violence at the plant. On 3-September the Police ended their escort protection for buses entering the plant citing escalating costs and the diversion of police from elsewhere in the City. On 18-October the workers voted 102 to 19 to accept a new contract. 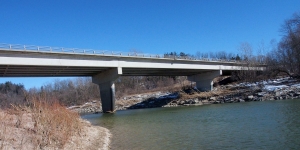 Cockshutt Bridge – On 3-December-1976 the present Cockshutt Bridge over the Grand River was opened. The bridge connects Erie Avenue in Brantford with the Cockshutt Road in the county. It is the eighth bridge built at this location. Ignatius Cockshutt built the first bridge in 1856. The need to replace the bridge became urgent when the Ontario Provincial Police declared in 1974 that the 1932 bridge was unsound and would not allow their officers to use the bridge. (image jJackowetz)

In 1971 there was a two-month strike at Watson Manufacturing, a six-week strike at Trailmobile, and a five-week walk out at Gates Rubber.

Workers at Massey-Ferguson struck four times in six years between 1968 and 1974; a seven-week strike in 1972 was followed by another strike in 1974. White Farm workers went on a six-day strike in 1977, the first strike at the company since it opened in 1877.

In November 1979, elementary teachers of the Brant County Board of Education went on strike, claiming they were the lowest paid teachers in the province. This was the first time teachers went on strike in the county. Parents pressured the two sides to negotiate and the strike ended after 21 days.

Education
In 1972, the Brant County Board of Education decided to close a number of aging elementary schools because of the high cost of renovations to bring them up to contemporary standards. New schools in the north end were built but there was still an imbalance regarding enrollment and overcrowding. Portable classrooms were added to the most overcrowded schools and children were bused to other areas of town where schools were below capacity. Cedarland Public School, 60 Ashgrove Avenue, opened in 1977 and was immediately over capacity.

The Andrew Donaldson Development Centre opened in 1973; a facility for children with cognitive and physical disabilities. The Lansdowne Children Centre also opened in 1973 with the move of the Brant County Cerebral Palsy Centre to Lansdowne School. It was designed to assist in the integration of physically disabled children into local schools. 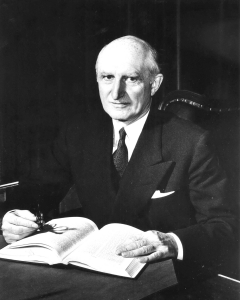 A study commissioned in 1970 by the Brantford Regional Board of Trade confirmed the need for both a university and college of applied arts and technology in the City. The lack of higher education opportunities was a factor in the slowing of economic growth in the area. In 1971, the provincial commission on post-secondary education recommended a satellite university campus be established in the City. A local committee looked at establishing a variety of courses in town offered by a consortium of area universities. The consortium idea proved unworkable when trying to reconcile all the requirements of each institution regarding fees, course content, and transfer of credits. Mohawk established a satellite campus in the Braneida Industrial Park in 1973. This campus was closed in 2013 and Mohawk withdrew all programming in Brantford in 2014.

The Ontario School for the Blinded celebrated its 100th anniversary in 1972. The new senior school complex was opened in 1973. In 1974, the school was renamed the W. Ross Macdonald School. Macdonald was a long time Liberal Member of Parliament and Senator.

The Mohawk Institute, an Indian residential school, closed in 1970. In 1973, the Woodland Cultural Centre was created at the former school to be a resource and research facility for the heritage and culture of the Woodlands people. The Centre also included a museum that would collect and display Indigenous artefacts.

Health and Wellness
The Brantford General Hospital’s School of Nursing, established in 1912, was transferred to Mohawk College in 1973. The hospital turned four floors of the nurses’ residence into a community centre for mental health patients.
The Fire Department transferred operation of the ambulance service, a service it had operated for 60 years, to a private operator from Hamilton.

In 1979, the Minister of Health asked the Brantford General Hospital and St. Joseph Hospital to submit plans to rationalise services and reduce costs; this included cutting the number of active care beds. The hospital rationalisation committee recommended transforming St. Joseph Hospital into a chronic care and rehabilitative centre and closing the Emergency Department. The St. Joseph Board rejected this proposal. Both hospitals did agree to reduce the number of active care beds. As negotiations between the two hospitals dragged on, the Ministry of Health moved to impose its preferred solution on the hospitals, and the community.