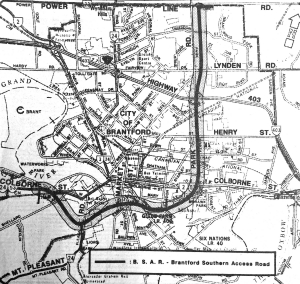 Map of the route of the Brantford Southern Access Road as proposed in 1966.

Highways and Railways
Planning for the Brantford Expressway, later referred to as the Brantford Southern Access Road, began in 1958. To deal with increasing automobile traffic congestion in the City, a 1964 traffic study report recommended more one-way streets and restrictions on downtown on-street curb parking during rush hours in addition to the construction of the expressway. The idea of the Brantford Expressway was to build a limited-access expressway to connect Colborne Street West (at Oakhill Drive) in West Brant with Highway 403. The Brantford Expressway was approved by Council in November-1966 and was expected to be completed by 1995. The Ontario government had land banked property in the Shellard’s Lane area in West Brant and the Brantford Expressway was integral to moving residents to and from this area to Highway 403 and beyond to destinations west, north and east. On 21-February-1969, the City and provincial government signed an agreement to fund and build the Expressway. The first portion of the Expressway between Mount Pleasant Street and Ontario Street which included a new bridge over the Grand River opened in 1972. Construction of this section was approved by Council in 1966. 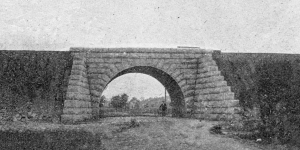 Railway Subway. This subway is the Murray Street subway and is the same that was located on Clarence Street until it was replaced in 1963. Courtesy of the Brant Historical Society.

Highway 24A that connected Galt with Paris was originally planned to be extended to Simcoe, along Rest Acres Road to Highway 53 and then along a brand new portion to Simcoe through Scotland. However the Department of Highways decided to number the new route between Highway 53 and Simcoe Highway 24 and abandoned the extension of Highway 24A south of Paris. On 18-August-1967 the newly aligned Highway 24 opened. The portion of the original Highway 24 that ran along Mount Pleasant Street through Mount Pleasant and Waterford to Simcoe was decommissioned and the new Highway 24 alignment followed Highway 53 through West Brant, past the airport. The new Highway 24 met with Rest Acres Road at Highway 53. 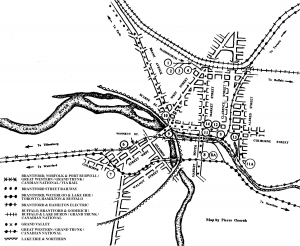 Electric operation on the Lake Erie & Northern Railway ended with a special excursion train on 30-September-1961. Diesel engines from the Canadian Pacific Railway replaced the electric cars after this. In 1962 freight service on the LE&N between Simcoe and Port Dover was discontinued. In 1965 LE&N trains began using the TH&B track between Brantford and Waterford and the LE&N tracks between Brantford and Waterford were abandoned.
The CNR subway on Clarence Street was widened to four lanes in 1963. Up until that time the subway was the same narrow subway still found on Murray and Rawdon Streets.

Street Name Changes
In 1962, a new laneway, east of Raleigh Street, St. Mary’s Lane opened. In 1965, Brewery Lane which ran south from Colborne Street West near Welsh Street was renamed St. Mary’s Lane. Brewery Lane marked the western edge of a brewery that operated at this site under various names; Spencer Brewing and Malting Company, West Brantford Brewery, Brantford Brewing and Malting Company, and finally Westbrook and Hacker Brewing Company; between 1845 until 1910 when the brewery was destroyed by fire.

Arts and Culture
Glenhyrst saw its fortunes reverse as the decade progressed. In 1960, it was deemed to be a unique asset in all of Canada, extremely busy, and paying its way. In 1969, when the gallery’s plan for expansion had stalled, the Art Gallery of Ontario stated that the gallery was too small and did not meet the AGOs security and environmental standards to mount exhibits of loaned AGO pieces.

In 1964, Brantford hosted what was planned to be an annual event, Maytime Brantford; the City’s equivalent of the Calgary Stampede. It was supposed to be Mardi Gras like, with a historical pageant, musical productions, parades, sports events, and a midway. It did feature a large art exhibit that displayed 260 paintings and sculptures; but mostly it was a midway and public support was poor. City Council withdrew their financial support for the 1965 festival and that was the end of Maytime Brantford.

In 1967, Arthur J Kelly of Burford mounted the largest centennial parade in Canada. The theme of the parade was local and national history. The parade included 105 floats and 5,000 marchers and lasted two and a half hours. It was watched by 50,000 people.

Sports and Recreation
The Kiwanis Club leased Mohawk Park from the City in 1960 in a bid to restore the park as a major summer attraction and a destination for family recreation. The Club wanted to offer boating, sailing, fishing, and a sandy beach. The club upgraded the sporting facilities and launched a pontoon boat, the Kiwanis Queen, to take people on pleasure rides on Mohawk Lake. The efforts of the Kiwanis Club did result in an increase in park campers. However in 1965 the Department of Lands and Forests deemed the lake dead; it was full of sludge and debris with oxygen levels too low to support game fish. This announcement hurt the reputation of the park and curtailed efforts to revive it.

In 1963, the first bantam-aged (age 15) baseball team from Brantford won the provincial championship. The team was assembled from the best players in the city to compete for the championship.

In 1968, it was again proposed to redevelop the Arrowdale Golf Course property for housing.

The Brantford Warriors won the Canadian Senior B lacrosse championships in 1963, 1967, and 1968.
Middleweight boxer Gary Summerhayes won the 1967 Canadian amateur middleweight boxing championship. Gary was 18. Gary was trained by boxing training legend Frank Bricker. In spite of his win Gary was not selected for the Canadian team for the 1968 Pan-American Games. He was not viewed as an Olympic style fighter.

In part 5 next month I outline the growth of suburban Brantford facilitated by the automobile.