She was five years old when her Dad died. He was only in his 30’s. Mom was a stay at home provider who’s life changed dramatically when the love of her young life died. Mom went to work outside the home to provide. It wasn’t easy for a little girl in that era. Single moms had it rough. “It was different,” says Charlene Nicholson. “I don’t think we were judged. It was just different.”

Charlene is the CEO of the Brantford-Brant Chamber of Commerce. As she enters her fifteenth year as the “go to” person at the Chamber, she took the time in her very busy and hectic schedule to share her story growing up in Brantford.

The challenges for Mom were obvious. Charlene learned a lot from watching how her mother handled all the usual issues of family life normally executed by two people. Her memories of her mother start with a heartfelt statement of love and admiration. Mom is now 93 years old and Charlene still finds her Mom bright, alert, compassionate and as independent as possible. The love and respect for her Mom oozes while on the topic of family. Charlene credits her Mom with much of her own strength and dedication she is known for around town. Strong women indeed. Both Mom and Charlene don’t suffer fools too much. That said, they both have had very full lives filled with a deep love of their community and service to others.

Charlene went to Agnes Hodge School in the early grades and was selected for the special class (gifted) that was offered at the same school for the intermediate grades. That’s when some of Moms influence started to take hold. Mom wanted her to be exposed to a variety of Life situations. She took her to live theatre events, concerts, sports events, and “suggested” volunteering for social causes. At fourteen years old, she volunteered at Brantwood and was hooked. She wanted to help. Brantwood would play a long lasting role in her life and her influence would be felt for a very long time at Brantwood. 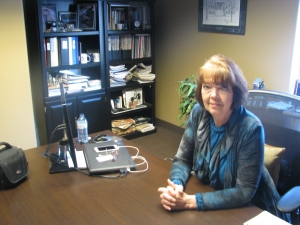 Her Secondary School years continued to develop the love of community and service as she continued her volunteering. She was in to athletics but also theatre. Mom inspired the well-rounded approach to life. Guess you could say both of them are Renaissance women. She made many friends during that time and has kept in touch with some who she considers life-long buddies. One would appear a few times in the political world locally and provincially. Once finished High School Charlene felt the pull of Toronto where she lived and worked for three years before returning to Brantford. Having a few jobs over the years, she always maintained that love of community and service to others. Finding love at a baseball game, she married her sweetheart “a little later than most” at twenty nine. (At least during that decade she commented). Thirty four years later, she laments (a little) the fact that all the kids are in B.C. They have two children and four Grandchildren.

A friend from elementary school, Phil Gilies, who along with Charlene, got the political bug due to a class project pointed them to the world of Civic Engagement. Time passes and Phil becomes Brantford’s MPP and needed a “Chief of Staff.” He tapped Charlene. She did that from 1981 to 1987, full time. Being the front line, local face of the MPP, Charlene learned firsthand the needs of the community and was able to make and keep contacts for solving problems and serving people in need. Once Phil’s term had ended, staff had to move on as is the nature of political public service. Then she felt the pull back to Brantwood where she landed once again.

She maintained two half time positions at Brantwood (different roles thus two half time jobs) while attending Sheridan College to become fully qualified within the developmental services field. Continuing her passion in the field, she became full time in one position and remained there until her Executive Director, to this day still a good friend, made a suggestion to apply for a position in another service sector in a more senior level. She followed the advice and began working for Nova Vita Women’s Shelter. During that time another very dear friend began “bugging and nagging” Charlene about another opportunity in the world of work. She finally said “ok” just to stop her friend from nagging. Being relaxed and not “needing’ nor technically “wanting’ the job, she got it! Hence, her 15 year stint as the CEO of the Chamber. The lifelong preparation for the ideal position for the ideal person enters its 16th year with energy, enthusiasm and determination to serve the members and the community she so dearly loves. Charlene still volunteers for Brantwood and just completed her term as President. She has joined The New Hospital Task Force and is looking forward to working with these community leaders to bring a much needed new facility to the region. If you ever run into her while she is reading a book….walk away! She is a voracious reader and doesn’t take kindly to interruptions. Fiction is her favourite.

It takes time to drink in all the wisdom of a mother. It takes time to find your place in a community. Charlene has used her time wisely and well. And we are the better for it.