This is the time of the year that most kids are thinking about scary movies and candy. October is also the time when leaves turn colour, fall weather brings a chill and hockey season is in full swing with dreams of a Stanley Cup parade for the Maple Leafs. Dream on. We are now even starting to see Christmas displays being put up for that extra push for consumers to get a jump on shopping. 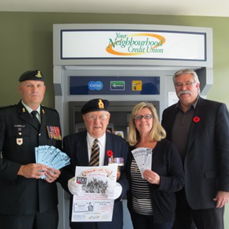 What about November? What happens in that “between-time”? You know, right after Halloween and before Christmas. The chill is still in the air. The Christmas displays are going up and the “stash” of candy has all but been eaten up……by Dad. There truly is another very special event that happens in November.

Remembrance Day! It’s that time we set aside during November to reflect, remember and show appreciation to the men and women who served the Armed Forces during times of conflict, war and peace. Individuals who stepped up when called. They are all called Veterans.

Derek Pite was a friend of mine. Some may say he was a friend to all. Our communities, and I say communities because Derek spread himself around this entire region, province and country, lost a good man. Yes, a good man. I always stop to drink in the very simple phrase “good man” used often. I believe deep down that he was a good man. Here’s what others called him… “such a sweet man”; “A very nice man who was generous with his time for others”; “…a truly kind, gentle and great caring human being”; “a wonderful man”; “Mr. Pite was known as a true leader in his community.” The list went on and on. Family man. Dedicated war hero. Infectious smile. Cheeky. Could tear you one and at the end you’d ask for another. He didn’t suffer fools. He told it like it was. Yet, there was that smile and the twinkle in his eye. He had stories, and shared them when asked. 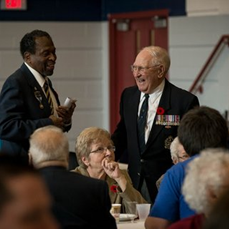 I really got to know Derek through his work on the Thank-A-Vet Luncheon Committee. Time and time again he always pointed us back to the Vets if we began to drift too far away with chatter. He was the one who arranged Veterans Affairs to set up a table at the Luncheon to meet and greet the Vets and answer questions to assist veterans and their spouses with difficulties they were having. That was Derek. He helped veterans all the time. His kitchen table was his office. He’d do “house calls” for the disabled or sick. He tackled tough issues head on. He fought hard for the comfort and dignity of veterans all over. Veterans Affairs staff knew him by name. He told me once when he called them, the lady on the other end of the line said; “OK Derek, you win.” Derek told me that he hadn’t even asked his question yet!

Once he got an idea, a project, an outstanding issue to fix….watch out. Derek was a determined man on a mission. The thing about it was that he always picked right. The task he set himself to (and he was also very good at drafting foot soldiers to help) could always be defended as “the right thing to do!” Whether it was co-founding the Canadian Military Heritage Museum, Director/Founder of the Brant County War Memorials Committee, 60 year member of the Royal Canadian Legion, helping a widow or veteran obtain proper services or pension, Derek did it, did it right and got it done.

In his 98th year, Derek accomplished much. His biggest joy came from his family. He was so proud of them. His beloved wife of 76 years, Verna (you read that right, 76 years) was the centre of his universe. Together always, they were buddies, friends, companions and lovers. The kind of story we need, the kind of life we should lead, the kind of civic duty we crave is why I tell a small part of my friend Derek Pite’s life.

We lost a good man but his story is always here to remind us that it’s not always about candy and scary movies or Christmas displays to nudge us into a quick sale or the Leafs winning the Stanley Cup.. It’s about duty, civic or otherwise, honour, friendship, caring for the underdog, and living life to the fullest. Thank you Derek Pite for the gentle reminder. Rest in Peace you “Good Man.”