Education
As the 1960s began, increases in elementary school enrollment started to level off but high school enrollment continued to increase. Even with the opening of Pauline Johnson Collegiate and North Park Collegiate there still was not enough space for students and additions to these facilities and Brantford Collegiate Institute were approved in 1962. This marked the biggest expansion to schools in Brantford ever and still more spaces would be required by 1964.

Herman E. Fawcett Secondary School, located at 112 Tollgate Road, opened on 3-January-1967. The school was named for Fawcett who was principal at Pauline Johnson Collegiate for 10 years before taking on the role of school inspector. The school was built under the auspices of the Technical and Vocational Training Assistance Act passed by the Diefenbaker government in 1960, and designed to accommodate 600 students. The Act made funds available for training and employment related programmes; to assist the provinces in setting up vocational schools. The school offered three-year, non-credit, occupational programmes graduating students with a certificate of training. Glen Wier was the first principal. Credit courses replaced the non-credit courses in 1976. In 1995, the school was renamed Tollgate Technological Skills Centre and became a magnet school for the Board of Education.

A 1963 review of City public schools recommended the replacement of Bellview, King Edward, and Alexandra schools due to their age and population redistribution in the City. Three new public elementary schools opened in new subdivisions between 1964 and 1967: Russell Reid in Mayfair, Grand Woodlands, and Centennial. In October-1963, the Board decided to put libraries in all the elementary schools over a three-year period, although this plan was not implemented until 1965.

In 1962, secret repairs were made on weekends at Ryerson School which was located on Oak Street, the current site of Branch 90 Legion, because the building was in such poor condition. The repairs were done in secret so as not to alarm parents. Because of this situation the City approved a new Ryerson School to be built immediately on Sherwood Drive, adjacent to the baseball diamond at Cockshutt Park. It would be built as a senior public school, housing only grade 7 and 8 students. The move from the old Ryerson School on Oak Street to the new school on Sherwood Drive occurred in November-1965. In 1967, Joseph Brant School on Erie Avenue opened as a senior public school.

In 1967, the provincial government built a new senior school at the Ontario School for the Blind, replacing the 96-year-old original school building. 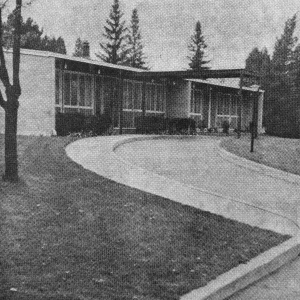 Jane Laycock School designed to accommodate children with special needs opened in 1962 on Mount Pleasant Street. It is now known as the Lansdowne Children’s Centre. Jane Laycock was Ignatius Cockshutt’s sister. She established and endowed the Jane Laycock Children’s Home in 1851 to care for orphans and poor and neglected children in Brantford. (Photo courtesy of the Brant Historical Society)

New, innovative programmes were introduced by the public-school board: driver training, summer school, French in elementary schools, sex education in high schools, and a programme for gifted children at Agnes Hodge School. In 1968, North Park Collegiate moved to a credit system eliminating traditional grades. Children with special needs would also be accommodated in a new Jane Laycock School on Mount Pleasant Street. The Brant Sanitarium donated one acre of land, at 39 Mount Pleasant Street, in 1961. The school opened in 1962. The school is now known as the Lansdowne Children’s Centre.

Brantford had been trying to secure a post-secondary education institution for what seemed like forever. In 1961, the province announced it would create trade schools, known today as Colleges of Applied Arts and Technology. Brantford lobbied the government for such a school in 1961 and 1965 but both times was passed over. In 1969, Mohawk College in Hamilton agreed to establish a satellite campus in Brantford on Elgin Street, in conjunction with the Brant County Board of Education, to offer retraining and continuing education programmes.
On 1-January-1969, the province amalgamated urban and rural school boards to create a county system of school boards. Although County ratepayers faced large tax hikes to equalise contributions across the City and County, the process here went rather smoothly. 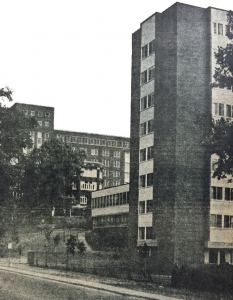 Nurses’ Residence. The residence, in the foreground, opened in April-1964, to replace the residence at the condemned Winston Hall. The residence accommodated 208 students in single rooms. The low two-storey structure in the middle, connecting the residence to the hospital, housed the School of Nursing. (Photo courtesy of the Brant Historical Society)

St. Joseph’s Hospital opened a school for certified nursing assistants in 1960. Meanwhile the Brantford General Hospital’s School of Nursing soldiered on using the inadequate and aging Winston Hall in Eagle Place as a nurse’s residence. Winston Hall was a building built during World War II as temporary housing for war workers. It was intended to be demolished after the war. In spite of the poor location relative to the hospital and the rapidly deteriorating condition of the building, City Council showed no interest in replacing the facility. In February-1962, the fire department condemned Winston Hall forcing the City’s hand. In April-1964, a new nine-storey nurse’s residence and school opened. The nurses’ residence building was Brantford’s tallest building when it opened.
The Brant County Board of Health set up a family planning clinic in 1966, in defiance of a 1908 provincial law prohibiting such clinics. Brantford was one of only five cities in the province with a family planning clinic.
The Brant Sanitarium closed its tuberculosis division in 1968 because of declining incidents of the disease. In its place the Sanitarium used this space to accommodate chronic and cognitively challenged patients and children with cognitive and physical challenges.

Centennial Projects
The City contemplated a number of ideas for civic centennial projects: an auditorium-concert hall for Glenhyrst, a hearing centre for seriously deaf children, a Grand River Parkway, a mobile library, an addition to Glenhyrst’s art gallery, a civic centre, and an addition to the Brant County Museum. It was decided to pursue the latter two projects since they were supported by the seven municipalities that comprised Brant County.

Arenas
The recurring quest for an arena and auditorium first raised in 1938 continued as the 1960s dawned. The Arctic Arena, the City’s only artificial ice surface was condemned and closed in the spring of 1960. The City had established the Brantford Civic Centre Committee in 1958 to drive the process to construct a new arena. The committee found little appetite amongst the residents, industry, and organisations to support the project. The Brant Figuring Skating Club thought of building a 200-seat arena, the Arctic Arena sat 3,500. Brantford was faced with the prospect of not having a location for hockey come wintertime. The Optimist Club raised $12,000 and the City contributed $7,300 to repair and reopen the Arctic Arena. The arena reopened in December-1960. The Arctic Arena closed in the spring of 1967 when the Civic Centre opened.

Arctic Arena demolition in 1968. The arena finally closed in the spring of 1967 after the Civic Centre opened. (Photo courtesy of the Brant Historical Society)

In January-1961, City Council contemplated purchasing the Arctic Arena. In April-1961, a Toronto firm floated the idea of building a small Maple Leaf Gardens and bringing a Junior A team to town. The Civic Centre Committee proposed a 1,500-seat facility funded by the city and public subscription. Council and the Committee then considered a 2,000, then a 2,500-seat arena. In October-1961, City Council agreed to purchase land on Market Street owned by Massey-Ferguson for a new arena and auditorium complex. The Toronto proposal was rejected because of financial conditions attached to the project. Council allocated money to the arena project in its 1962 budget with the proviso that a public subscription campaign be launched. Still nothing happened as the residents showed little interest in supporting the project. In July-1963, Mayor Beckett proposed a new civic centre as a centennial project. With still no progress being made on building a new arena the Brantford Labour Council in December-1963 asked City Council for permission to lead a fundraising campaign. Their goal was to raise $600,000. They asked all their members to pledge one day’s pay per year for three years. In May-1965, the fundraising goal had been met however tenders for the project came in higher than expected so fundraising continued. On 19-May-1966, 3,000 people watched the sod-turning ceremony held on the Market Street site. On 25-March-1967, 2,000 attended the official opening ceremonies. Louis Armstrong was the first big name performer to play the Civic Centre in April-1967. In September-1967, the new expansion NHL franchise, the Pittsburgh Penguins, opened their pre-season training camp at the Civic Centre. The Penguins played their first exhibition game on 23-September-1967 against the Philadelphia Flyers.

In 1967, another arena opened in Brantford. North Park Arena was located in a field behind a church adjacent to North Park Collegiate on North Park Street. A second ice pad was added in 1972. The Brant Aquatic Centre was added in 1974. It was renamed the Wayne Gretzky Sports Centre in 1982. On 26-December-1997 a third ice surface, the privately built Brantford Ice Park, opened. The arena complex was demolished in 2011 to make way for the new four-rink Wayne Gretzky Sports Complex which opened in September 2013.

Next month in part 4 I will write about Highways and Railways, Arts and Culture, and Sports and Recreation.