The 1960s were a time of growth and optimism for Brantford and Canada. The post war boom that took hold in the 1950s exploded in the 1960s as the City expanded with new suburban subdivisions and the accompanying suburban amenities. Downtown, with its congestion and old deteriorating buildings, began to lose ground to new modern, spacious, bright, sprawling, suburban stores and plazas that offered plenty of free parking. 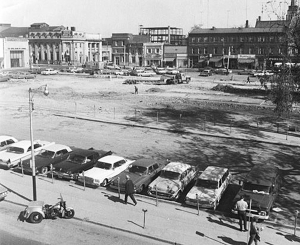 Market Square, September-1965 after the demolition of City Hall. Looking north towards the corner of Dalhousie and Market Streets. The steel skeleton in the top centre of the picture is the new Canada Permanent Trust Building, now the downtown branch of the TD Canada Trust. (Image courtesy of the Brant Historical Society)

Market Square
The City considered the redevelopment of the Market Square as the key to a revitalized downtown. The property was viewed as the most valuable and underused parcel in the City. City Hall was seen as inadequate and an eyesore; this was identified as early as the 1890’s, yet sixty years later it was still the seat of municipal government.

On 21-January-1964, the Ontario Management Corporation agreed to purchase the Market Square for $450,000. The sale of the Market Square was supported by the Board of Trade, the Brantford Labour Council, local merchants, and residents through a referendum vote. The Farmers’ Market vendors protested the relocation of the Farmers’ Market to the east end of the canal basin parking lot on Greenwich Street, now Icomm Drive, as the location was deemed out of the way. The Six Nations Confederacy also protested the proposed sale of Market Square for private development; the site was always intended to remain a public gathering space. Demolition of City Hall began on 28-Apr-1965. The developers were unable to develop the Square according to their initial proposal and their revised plans did not meet with Council’s approval so in February-1967 the City foreclosed on the mortgage and retook possession of the property. By the end of the decade Market Square remained undeveloped and the downtown continued to deteriorate.

City Hall
The original idea was to sell Market Square and redevelop the site with a City Hall, department store and underground parking garage. This idea never materialised as City Council balked at committing to a 15 to 20-year lease for office space. Instead Council decided in April-1964 to build at the corner of Wellington and George Streets, the site of the former YWCA. A design competition was held and 38 submissions were received. Toronto architect Michael Kopsa’s Brutalism design was selected. The design is polarising yet was progressive and forward thinking at the time; “the symbol of a new-found spirit of progress and confidence in Brantford’s future”, as proclaimed by The Expositor. The City Hall and Provincial Court House are cited by architects as an excellent example of well-executed Brutalism buildings. The new City Hall was officially opened on 28-November-1967 by Governor-General Roland Michener.

Housing
The housing supply crisis of the post WWII years had abated, however, housing for low income families and the elderly continued to be in short supply. New subdivisions began to be built in the City: Mayfair, the Memorial Drive area, and Orchard Park on the north side of Colborne Street east of Sheffield Avenue. These new housing developments did not address the need for low cost accommodation. This shortage led to increased demand from the Children’s Aid Society to provide families with rent subsidies and saw an increase in the need for foster care as evictions increased. The City along with the Ontario Housing Corporation built affordable housing units behind the present day McDonald’s on Stanley Street and on the former Winston Hall (Nurse’s Residence) property in Eagle Place. By the end of the decade plans were underway for the Lorne Towers seniors’ complex on Colborne Street West, a 159-unit high-rise that opened in 1972. The Government supported housing but was never able to keep pace with the demand for affordable housing.

Social Services
In addition to the demand for low cost housing, nursery school spaces were not keeping pace with demand as more families saw both parents working. In order to increase the spaces available Council amended zoning bylaws to allow nursery schools in residential areas and in churches.
In 1963, Brantford became the first city in Canada to offer the Meals on Wheels programme for seniors.

Police and Fire
Brantford’s new Police and Fire stations opened in 1954. They were built on the former canal basin and as a result both buildings experienced structural problems as the buildings settled. While it appeared that the settling problems of the Fire station were addressed in the 1950s, as the 1960s progressed the Police station was faced with a further sinking of the floors, which resulted in crushed sewer pipes, pulled out interior plumbing, twisted electrical conduit, cracked walls, and jammed door frames. In 1964, the Police moved to temporary quarters at Winston Hall while repairs to their station could be made. By this time Winston Hall had been condemned by the Fire Department but the move was made nonetheless. 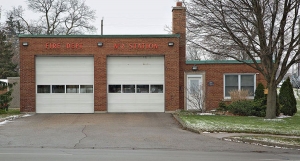 Fire Station No. 2, opened in 1960 (Image courtesy of the Brant Historical Society)

Fire Station number 2 opened at 311 St. Paul Avenue in 1960 to deal with the growth of the City in the north end. Today, this station can no longer house all the latest firefighting equipment and accommodate female firefighters so a new fire hall to be located on the site of the closed Fairview School will replace this station. In 1965, the Fire Chief, Chief Charles Townson, asked for a third fire station to be built in the east end of the City. Fire station number 3 was finally built in 1976 but was located in the north end of the City, near the intersection of Fairview Road and the Wayne Gretzky Parkway. 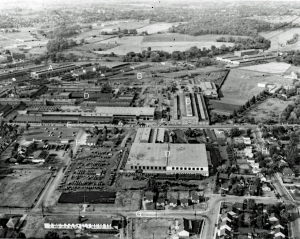 In 1959 Brantford Coach and Body purchased land in Cainsville to build a new modern one floor facility to specifically manufacture highway trailers. In 1965 the Brantford Coach and Body subsidiary was sold to Nova Industrial Corp and renamed Brantford Trailer and Body. The old production facility on Mohawk Street was sold to Sternson Ltd and all manufacturing was consolidated at the Cainsville site. In 1968 Nova sold Brantford Trailer and Body to Trailmobile Canada Ltd, who operated the plant until it was closed in 1990.

In September-1962, Massey-Ferguson announced it was building a new plant, the North American Combine Plant, on land on Park Road North, adjacent to the CNR rail line, that the company acquired in 1955. The new 550,000 sq ft plant and office complex opened in June-1964. 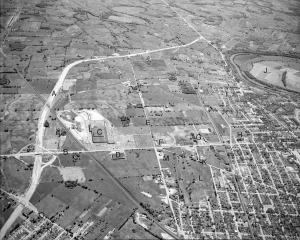 Great Western Garment Company acquired Kitchen-Peabody Garments Limited in August-1965. Kitchen-Peabody was founded by Charles Kitchen in 1911. Jeans and garments were produced under the GWG and Levi’s brand name at the Brantford facility. Of interest, Kitchen-Peabody paid their workers in cash until 1960. The plant employed 300 workers at the time of the acquisition. The company, later known as Levi Strauss Canada Inc., closed its Brantford operations in March-2004.

In 1965, the City began development of the Brantford North Eastern Industrial Development Area, Braneida. This industrial park was built along the new Highway 403 on the eastern edge of the City.

Labour
The late sixties was a tumultuous period in labour/management relations in the City. 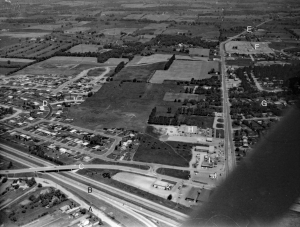 Two major work stoppages occurred in 1967, a ten-week strike at Barber-Ellis, a stationary and envelope manufacturer, and a month long strike at the City’s works department. The latter resulted in the contracting out of garbage collection in the City. In 1968, there were ten strikes. 2,100 United Auto Workers (UAW) workers went on strike for thirteen weeks at Massey-Ferguson seeking wage parity with their American counterparts. The workers gained better fringe benefits but not the wage parity they were seeking. The City’s white collar workers walked off the job for 12 weeks effectively shutting down civic services. The workers were asking for higher wages and job security.
In 1968, a strike at Chicago Rawhide on Park Road North turned violent resulting in smashed car windows, mass protests, shoving matches between workers and the police, and a woman being hit by a car. Workers from other unions joined the picket line. A settlement was reached in March-1969. Chicago Rawhide was located at the corner of the Wayne Gretzky Parkway and Henry Street, where the Leon’s Plaza is now located. In 1969, strikes occurred at Stelco Fasteners, Harding Carpets, and Westinghouse.