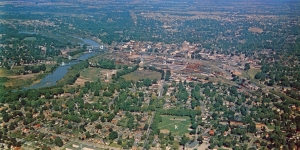 City Council
As the 1950s ended, the issue regarding allowing cocktail bars and licensed dining lounges to operate in the City continued to be rejected by council. Finally, a petition forced City Council to hold a referendum on the issue. The issue was contentious with raised emotions on both sides. On 23-January-1960, 68 percent of eligible voters voted in the favour of the motion. The last Council of the 1950s had been testy and citizens were tired of it. In the December-1960 municipal election voters elected a new mayor and seven new aldermen, only three aldermen were returned. A referendum was held during this election on whether to allow Sunday sporting events and Sunday movie screenings. Sunday baseball was played at Agricultural Park until 1957 when the Parks Board unexpectedly rescinded its permission. Voters voted in favour of allowing Sunday sports and movies.

Municipal Affairs
In 1964, the idea of a regional government was proposed by Brantford Township, when they requested a study of creating a single tier municipality for all of Brant County. By 1969 there were suggestions that Brant County would become a part of the proposed Haldimand-Norfolk region. Brant County never joined with Haldimand and Norfolk. Since that time the Haldimand-Norfolk region disbanded in 2001, and Brantford remains a separate municipality from Brant County, although the County townships and Town of Paris amalgamated in 1999 to form a single tier municipality.

Securing the long-term adequacy of the City’s water supply remained an important issue. Brantford was dependent on the Grand River and the water’s quality and taste were poor. A long standing joke in Waterloo County was “flush your toilet, Brantford needs the water”. The Ontario Water Resources Commission recommended the construction of a pipeline from Lake Erie to serve Brantford and the lower Grand River watershed. The cost of the project caused the City to reject the recommendation. They also felt that Lake Erie’s water quality was no better than the Grand River and was expected to get worse. On 7-September-1960, the water treatment plant finally opened and with that the hope for taste and odour-free water.

In 1960, the Department of Health reported that the smoke and dust pollution in Brantford was worse than in Toronto due to the number of manufacturing plants in this small city. Although the City had bylaws to deal with the problem, bylaw enforcement was the issue, and Council refused to commit funds to hire an enforcement inspector.
Up to 1967 garbage collection was a municipal department. The service provided by the City included bringing garbage cans to the street and returning them after collection, known as set out and take back. In 1967, the garbage collectors went on a lengthy strike. Someone set fire to the landfill site. In the aftermath of the civic disruption garbage collection was contracted out and set out and take back was eliminated.

With the Cold War at its height in the early 1960s, the City rejected the idea of building a community fallout shelter. Instead residents were advised to construct their own; a project that was estimated to cost about $120.
In January-1963, the City merged the Parks Board with the Recreation Commission. This was done to eliminate duplication and achieved by appointing the same members to both Boards since neither Board was keen on merging.
Downtown

The deterioration of the downtown core was of concern to City Council throughout the 1960s as the downtown represented 25 percent of the City’s tax revenue. The downtown was already getting national attention regarding its poor condition and empty properties resulting from numerous fires; many of these hotel fires. It was during this decade that overhanging business signs were eliminated, to improve the appearance of the downtown. 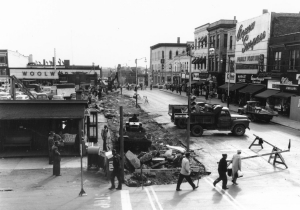 According to a 1966 survey, 83 percent of City residents were concerned about the appearance of downtown. As suburban plazas were being developed, retailers still saw the value of being downtown. Eaton’s acquired the Walker’s store chain in 1965 and converted their store in the Arcade Building, at the corner of Colborne and Queen Streets, to Walker’s. In 1969, Woolworth’s announced their move to an expanded location at the corner of Colborne and Market Streets, now the location of the Brantford Public Library.

In 1967, a joint federal and provincial funded urban renewal study of the downtown was released. Two years in the making, the report concluded that the bulldozer was the only solution for many parts of the downtown because almost a quarter of the City’s substandard buildings were in the downtown core. The 1969 Central Brantford Urban Renewal Scheme called for sixteen projects to be carried out over sixteen years to demolish, rehabilitate, and conserve downtown buildings by means of public and private funding. The study recommended the creation of pedestrian malls along Colborne Street and George Street to replace vehicle traffic with pedestrian traffic. All planning came to a halt in December-1969 when the Federal government choose not to support the project.

Through various committees and authorities, the City embarked on an endeavour to increase the supply of off street parking spaces with the goal of eliminating on street parking in the downtown core. Traffic in the core continued to increase and more traffic lanes would be required to handle the volume. In 1965, the properties west of The Expositor building along Dalhousie Street to King Street were acquired.

In January-1965, a new system to synchronise the traffic lights in the downtown was implemented and finally seemed to provide relief to drivers, after numerous attempts since the 1950s to implement a workable solution.

Fires
Fires in the downtown started to change the appearance of the downtown as many of the burned buildings were reduced to empty lots.

On 31-January-1962, a fire destroyed the Brant Hotel located at 81-89 Dalhousie across from what was then the Capital Theatre and is now the Sanderson Centre. Despite the fire, patrons continued to drink in the men’s bar until they were ordered out of the hotel by firefighters. 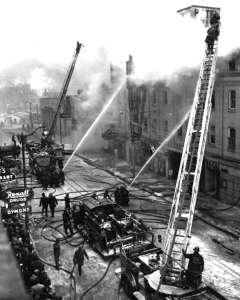 On 4-March-1962, the Bodega Hotel at the corner of Market and Darling Streets burned down. TD Canada Trust now occupies this corner. The building was built by the Canada Permanent Trust Company in 1966.
The Belinda Shoe Store and Aragon Restaurant (128 & 130 Colborne Street) were burned out on 12-July-1965. A building used by the U.A.W. Local 458 on 55 Darling Street burned down on 4-March-1965. It was located behind the Temple Building. It is now a parking lot.

On 11-January-1970, six businesses along George Street (between Dalhousie and Colborne Streets were damaged by a major fire: Miller and Miller law office, Varga and Frank realtor, Ideal Cleaners and Dyers, OK Shoes, Rainbow Fabrics and Karek’s Food Specialties. The Hotel Kerby suffered smoke and water damage. All fire trucks and firefighters, including off-duty firefighters, were needed to fight the blaze.

Brant Hotel Fire, 31-January-1962 (Image courtesy of the Brant Historical Society) Located at 85 Dalhousie Street, the hotel was built in 1858 and was called the American Hotel. It was renamed to the Brant Hotel in 1923. In 1960 a group of Toronto businessmen bought the hotel and made extensive renovations. The hotel had 80 rooms. The eastern portion of Harmony Square now occupies this location.

Federal and Provincial Representation
In the 1962 federal election, Jim Brown defeated Conservative incumbent Jack Wratten to take the riding for the Liberals, a riding Brown held throughout the sixties. Brantford had been a Liberal held riding since 1935 interrupted when Wratten was elected for one term in the Diefenbaker sweep in 1957.
Provincially George Gordon held the riding of Brantford for the Liberals from 1948 until 1967 when, with the support of labour, Mac Makarchuk won the riding for the NDP. 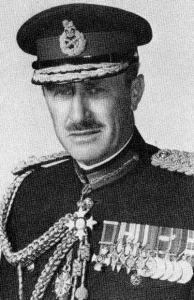 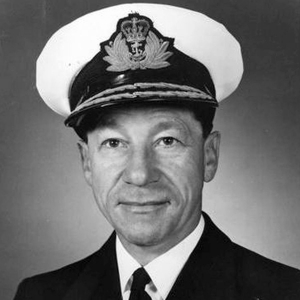 Next month in Part 2 I will review the developments regarding the City Hall and Market Square, the housing situation, industrial developments, and the labour situation.